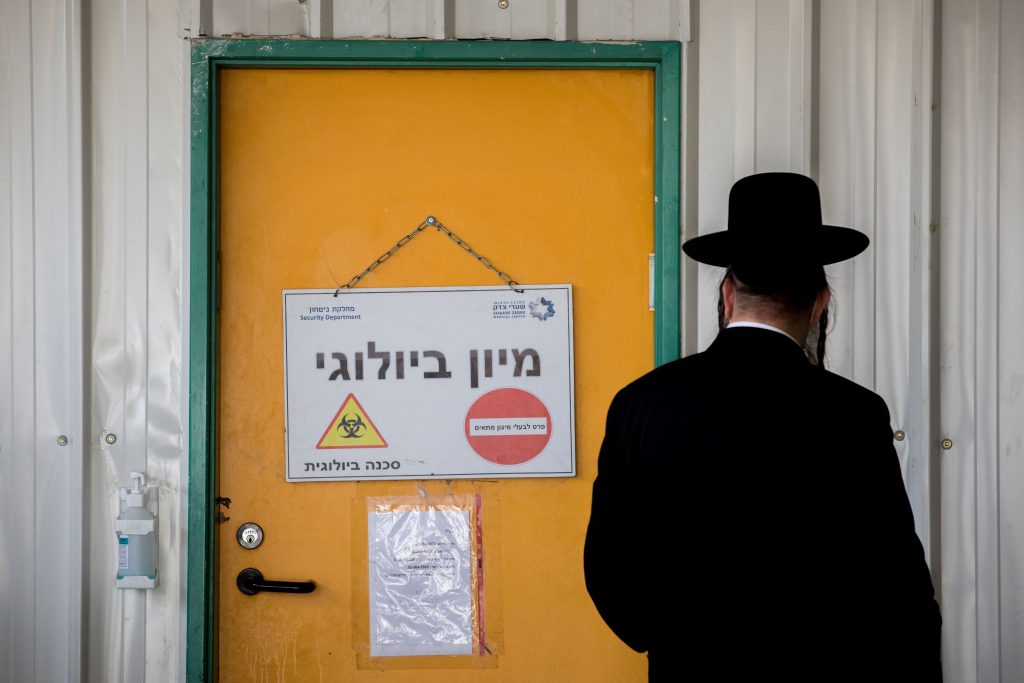 Forty percent of all new coronavirus cases are coming from the chareidi public, coronavirus commissioner Professor Ronni Gamzu said Thursday, amid increasing concern over morbidity rates in the community.

“We woke up this morning with 9,000 verified cases,” Gamzu said. “This did not surprise me. I prepared everyone for the fact that after Yom Kippur the number would be like this. We need to look at the number from a four-day perspective. Even today we will end with 70,000, or more, tests conducted.”

“The 9,000 new infections did not surprise me, as it came after Yom Kippur. It sums up Friday, Shabbat, Sunday and Monday. We will probably see these numbers today as well,” he explained.

Gamzu noted that about 40% of those who tested positive in Israel in recent days come from the chareidi sector. “Today I will visit one of the chareidi localities to see up close the existing complexities and do everything possible to strengthen them. We must remember that in the end there are complexities in the general and Arab population as well, but in each of them there is a finger on the pulse.”

In addition, he noted that the proportion of patients over the age of 60 in the chareidi sector is rising. “Everything should be done to strengthen and give an understanding that morbidity is high.”

“I did not want a lockdown. But as soon as the hospitals raised the red flag – at that moment I asked for a lockdown. It is effective, but can we reach the level of decline we had at Pesach? No, we are not there,” he noted.

Gamzu added that cases among the older members of the chareidi community were on the rise.

“It is worrying that the proportion of patients over the age of 60 in the chareidi public is rising,” Gamzu said.

Gamzu also said that he would consider staying on in the role of virus czar if Health Minister Yuli Edelstein asked him to, although he wanted to return to his job as director of Tel Aviv’s Ichilov Medical Center on November 1.

Asked whether former Health Ministry director general Moshe Bar Siman-Tov would replace him as head of the national effort in the pandemic, Gamzu said that he would be a good choice for the job.

Bar Siman-Tov, who headed the ministry when the pandemic began, was the face of Israel’s widely touted response during the first wave of the virus, when the country successfully managed to bring infection levels to near zero by implementing a tightly controlled national lockdown.

He resigned as Health Ministry director general in May, days after the Cabinet voted – against his recommendation – to significantly ease restrictions throughout the country, a move widely seen now as a major factor in the resurgence of the virus.

Major General Roni Numa, head of the chareidi desk in Gamzu’s team said that the talk of thousands of yeshivah students walking in the streets with the virus “is incorrect.”

“There may be a number of patients that we were unable to locate. But it’s not tens of thousands of bachurim who are about to infect the Israeli society. ”

Numa said that of the current approximate 69,000 active patients, 21,194 of them are chareidim.

He noted that the infection in the religious Zionist yeshivos were about the same rates as in the chareidi yeshivos.