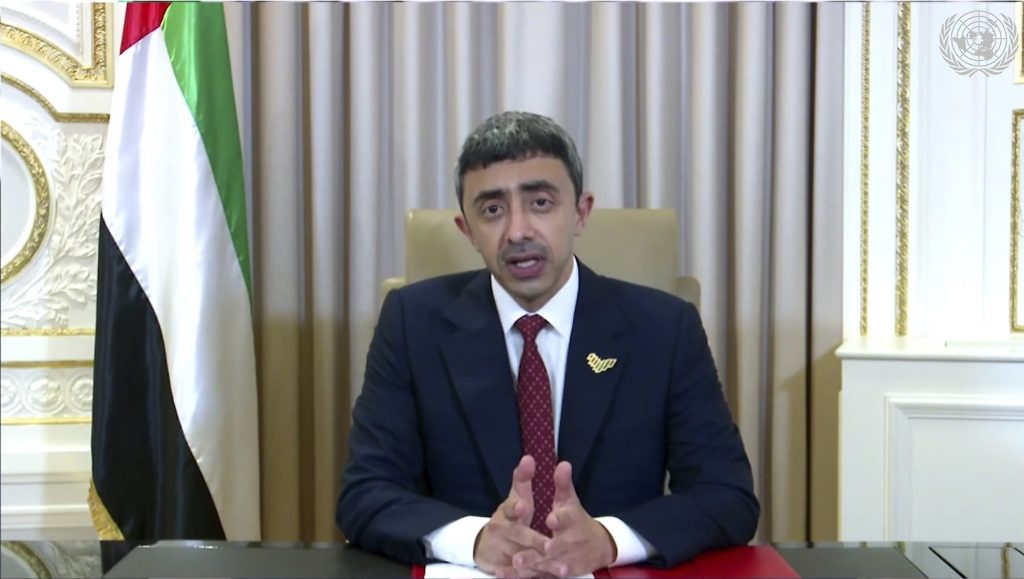 The United Arab Emirates has defended its decision to normalize ties with Israel and criticized interference in Arab affairs, an apparent reference to its foes Iran and Turkey.

Emirati Foreign Minister Sheikh Abdullah bin Zayed Al Nahyan, the brother of Abu Dhabi’s powerful crown prince, made the remarks during a speech Tuesday before the U.N. General Assembly. He proclaimed that the UAE’s decision announced in August to formalize ties with Israel froze a controversial Israeli plan to annex territory in Yehuda and Shomron.

Israel’s prime minister, however, has insisted that plans have only been temporarily suspended.

“We hope this peace accord will provide the opportunity for the Palestinians and the Israelis to re-engage in negotiations to achieve peace,” Al Nahyan said.

Palestinians have blasted the deals signed by the UAE and Bahrain with Israel, which were brokered by the United States, as acts of betrayal. President Mahmoud Abbas used his U.N. speech on Friday to stress that his government has not given a mandate to anyone to speak or negotiate on behalf of the Palestinian people. Abbas said that the only path for lasting peace is an end to the Israeli “occupation” and creation of a Palestinian state.

The Emirati foreign minister also warned against what he said were “the expansionist ambitions of some countries in the region.” Though he stopped short of naming any countries, the UAE has long accused Iran, Turkey and Qatar of meddling beyond their borders in the affairs of other states.

The UAE is part of a quartet of Arab states that have boycotted Qatar since 2017, primarily for its backing of Islamist groups like the Muslim Brotherhood, which the UAE brands a terrorist group and deems a political and security threat.

In an apparent dig at Turkey and Iran, Al Nahyan said that tensions in Yemen, Syria, Libya and Iraq are related to “blatant interference in Arab affairs made by states … that have historical delusions of restoring their domination and colonial rule over the Arab region and the Horn of Africa.” He called on Iran specifically to stop the development of its ballistic missile programs.

The UAE, a country of about 9 million people with more than 1 million Emirati citizens, is militarily involved in Yemen as a key partner of the Saudi-led coalition fighting the Iran-backed Houthis. The UAE also backs a military commander in Libya’s east who’s a rival to the allied militias in Tripoli that have backing from Turkey and Qatar.