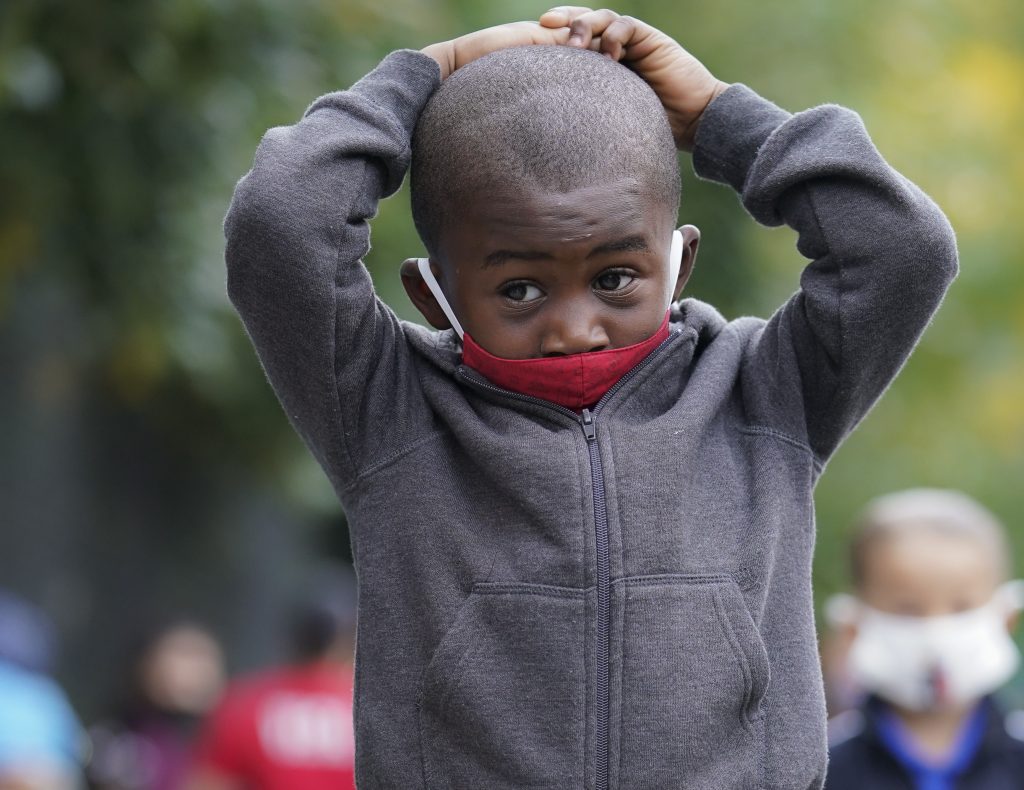 Hundreds of thousands of elementary school students are heading back to classrooms this week as New York City enters a high-stakes stage of resuming in-person learning during the coronavirus pandemic, which is keeping students at home in many other big U.S. school systems.

Twice delayed, the elementary school reopening on Tuesday came over objections from school principals who said the city’s complicated, changing plans put them in a staffing bind.

Meanwhile, officials are worried about recent spurts in virus cases in some city neighborhoods after a summer of success at keeping transmission fairly stable in the city as a whole.

“It’s a big moment for the city,” Mayor Bill de Blasio said on cable news station NY1 Monday night. With in-person learning for middle and high school students scheduled to begin Thursday, he noted, “as many as half a million kids could be in school in the course of this week.”

With over 1 million public school students, New York City initially had a more ambitious timeline than many other big U.S. school systems for bringing children back to schoolhouses this fall. Families have the option of choosing all-remote learning, and a growing number are doing so — 48% as of Friday, up from 30% six weeks earlier, according to city Education Department statistics.

Other students are already back in the city’s virus-altered version of in-person school, learning sometimes in classrooms and sometimes at home.

Pre-kindergarteners and some special education students began showing up Sept. 21 as online instruction began for the rest of the student body.

Tuesday was the first day of in-person learning for students in kindergarten through fifth grades whose families had chosen the hybrid learning plan, while high some school and middle school students are slated to be back in classrooms starting Thursday.

Sonam Zompa was excited for her 7-year-old son to go back to his elementary school on Manhattan’s Lower East Side — and so was he. The third-grader, Tenzin Topdhen, said he liked his online classes but missed his friends — and in school, “we have actual recess.”

Waiting for her daughter to go through a temperature check and questionnaire at the same school, Ashley Shelton said she hoped the start of school would be good for both of them.

Online learning was “how can I put that — OK,” Shelton said, but her daughter missed going to school. And Shelton, a single mother, lost her receptionist job amid the pandemic. Now that school is starting, she’s looking for new work.

Still, “I’m not going to say it was easy” to decide to send her daughter to school in person, Shelton said. “Because I have my doubts, I have my worries.”

Students were originally due back Sept. 10. But the start date was pushed back, repeatedly, after the city teachers’ union said it wasn’t safe to open schools because of outdated ventilation systems, an insufficient number of school nurses and other issues. At one point, the United Federation of Teachers threatened to strike.

The union was still pressing for changes as recently as Friday, when the city agreed to let more teachers work from home when instructing students remotely, rather than having to come in to school to conduct online classes.

The principals’ union said the late-breaking change was too much. Principals had already complained that the city was creating a staffing crunch by planning to have three different groups of teachers — one for all-remote students, another for in-classroom pupils and a third for blended-program students when they’re at home.

Saying that de Blasio and Schools Chancellor Richard Carranza “have entered into grossly irresponsible staffing agreements,” the Council of School Supervisors and Administrators called Sunday for the state to take control of the school system for the duration of the pandemic.

Gov. Andrew Cuomo said Monday that he understood the concern of the principals’ union and that the state would monitor virus testing data to determine whether any steps need to be taken concerning New York City schools.

Many other big school systems around the country began the fall term online, though some are reopening physical schools. In Florida, for instance, students opting for in-person learning returned to schools Sept. 21 in Palm Beach County, where the nation’s 10th largest school system has over 197,000 students.