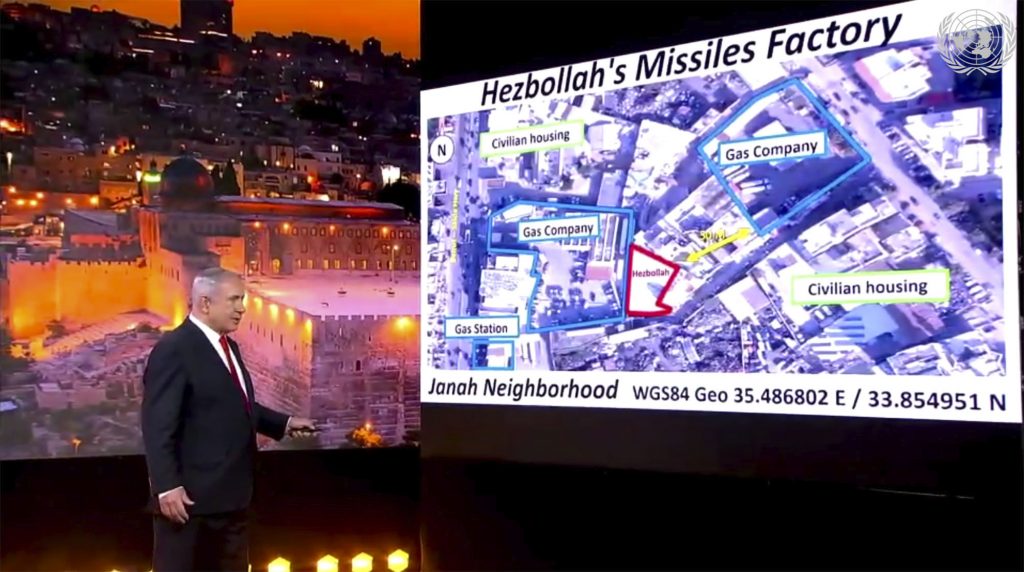 Israeli Prime Minister Binyamin Netanyahu‏‏ revealed evidence of a secret weapons facility belonging to Hezbollah in Beirut during a speech to the U.N. General Assembly on Tuesday.

“We all saw the terrible explosion at Beirut port last month,” Netanyahu said, showing a map of the devastated city. “Two hundred people died, thousands of people were injured, and a quarter of a million people were made homeless.”

“Now, here is where the next explosion could take place. Right here,” Netanyahu said, pointing at site on the map near the site of the explosion in August. “This is the Beirut neighborhood of Janah. It’s right next to the international airport. And here, Hezbollah is keeping a secret arms depot.

“This secret arms depot, right here, is adjacent, a meter away, from a gas company. These are gas canisters. Right here. It’s a few meters away from a gas station. It’s fifty meters away from the gas company. Here are more gas trucks. And it’s embedded in civilian housing here, civilian housing here. For the Janah neighborhood residents: This is the actual coordinates.”

Addressing the Lebanese people directly: “I say to the people of Janah, you’ve got to act now. You’ve got to protest this. Because if this thing explodes, it’s another tragedy.”

In the video message, Netanyahu mentioned the normalization deals between Israel and the UAE and Bahrain, reiterating that he expects more Arab countries to follow suit, which will improve the prospects for peace:

Netanyahu says that after the Palestinians realize “they have lost their veto” and also recognize Israel as the Jewish state, “I would be willing to negotiate on the basis of the Trump plan to end our conflict with the Palestinians once and for all.”