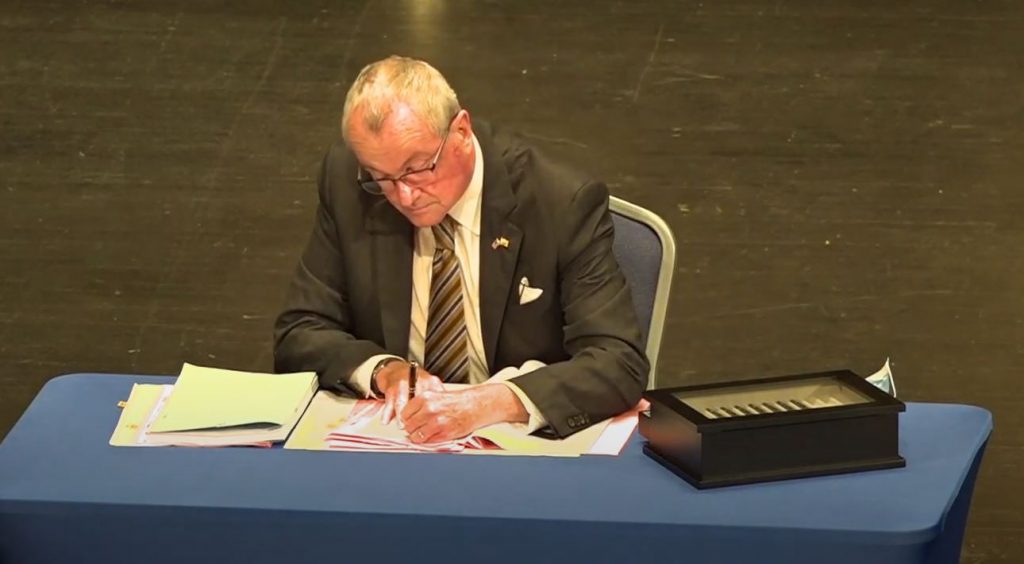 Gov. Phil Murphy on Tuesday signed a $32.7 billion budget for New Jersey that raises taxes on the wealthy and businesses and authorizes $4.5 billion in new debt he says is necessary to keep state finances solvent.

The spending plan goes into effect Thursday and will keep state government operating until June 30. It sends billions of dollars to the state’s school districts and millions to transit, makes a nearly $5 billion public pension payment, and sets aside more than $2 billion in a rainy day fund.

Overall, the fiscal 2021 budget is 4% higher than the previous year’s, an increase that reflects higher spending the Democratic governor said is necessary to keep New Jersey’s most vulnerable residents afloat during the COVID-19 outbreak.

Murphy signed the budget in Trenton’s War Memorial Theater to accommodate social distancing, but the ceremony also had a celebratory tone to it.

Murphy has long sought a so-called millionaires tax, campaigning on the increase in 2017, and the new budget amounts to the fulfillment of that promise for the first-term governor.

“As we continue to fight this pandemic, this budget will provide the resources we need to build a stronger, fairer, more resilient future,” Murphy said.

Republicans, who are in the minority in the Legislature, argued that Murphy should consider belt-tightening and wait before borrowing to see if state revenues recover.

Murphy has said there’s a roughly $5 billion revenue shortfall, though tax receipts have shown some improvement.

“With this budget, Governor Murphy might as well be signing a letter addressed to every New Jersey taxpayer that reads ‘move to FL or PA. I don’t care,'” state GOP chairperson Doug Steinhardt said in a statement.

Outside the theater, about a few dozen protesters chanted “We are essential, but excluded.”

Sara Cullinane, one of the protesters, said they applauded the “progressive budget” but wanted a relief fund for nearly half a million immigrants living in the country illegally who were excluded from federal COVID-19 jobless benefits.

Under the budget, millionaires and businesses earning over $1 million will be paying more to the state. The top marginal income tax rate will climb from 8.97% to 10.75%. That means every dollar above $1 million will be taxed at the highest rate.

Businesses making more than $1 million will climb from 10.5% to 11.5% under the budget. The higher business tax rate would expire in four years under the budget, though the current rate is the result of an increase in 2018 that was set to expire in 2022. Now that date is pushed farther out.

The borrowing is expected to carry an estimated 2.5% interest rate and will add to New Jersey’s more than $44 billion in bonded debt. The money will go to a number of areas, with the biggest share going to school districts.

Part of the budget deal between Murphy and legislative leaders included a tax rebate of up to $500 for about 800,000 in New Jersey.

But that won’t come until 2021. Lawmakers say it’s because they want to capture the economic pain families felt during 2020 when COVID-19 struck hard. That financial strain will be seen when they do their 2020 tax returns next year, they say.

But Republicans view the rebate as an election-year gimmick aimed at doling out cash to voters when Murphy and the 120-seat Legislature are on the ballot.

The budget year was shortened by three months because of the outbreak, and lawmakers enacted an interim $7.7 billion budget. That, plus the $32.7 billion spending plan, puts the 2021 budget at about $40.4 billion, or roughly 4% higher than the previous year.