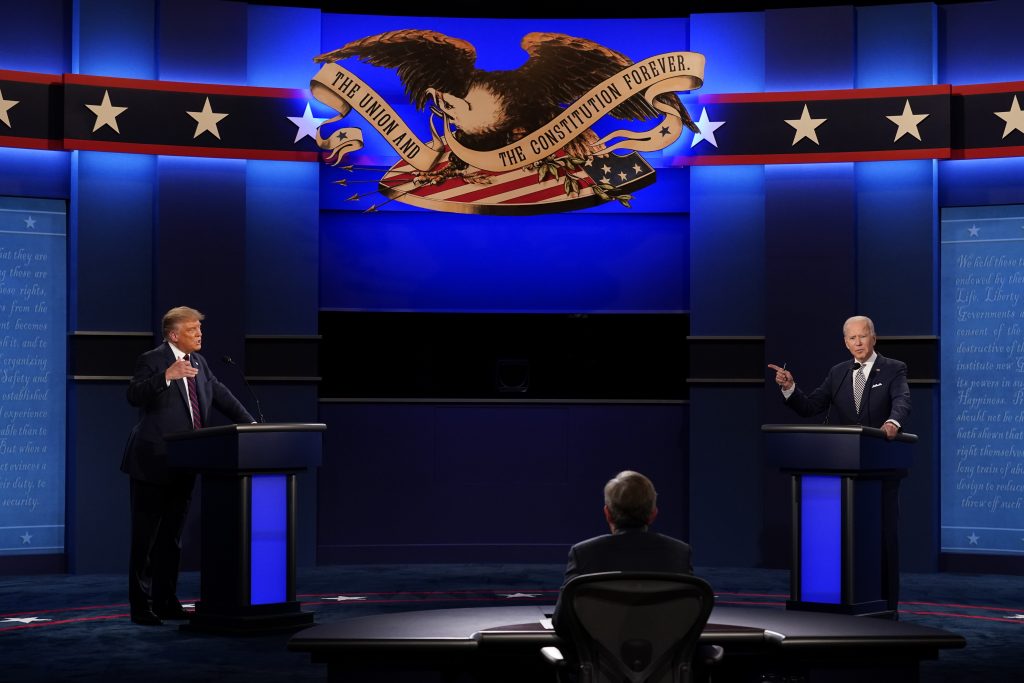 Marked by angry interruptions and bitter accusations, the first debate between President Donald Trump and Democratic challenger Joe Biden erupted in contentious exchanges Tuesday night over the coronavirus pandemic, city violence, job losses and how the Supreme Court will shape the future of the nation’s health care.

In what was the most chaotic presidential debate in recent years, somehow fitting for what has been an extraordinarily ugly campaign, the two men frequently talked over each other with Trump interrupting, nearly shouting, so often that Biden eventually snapped at him, “Will you shut up, man?”

Trump and Biden arrived in Cleveland hoping the debate would energize their bases of support, even as they competed for the slim slice of undecided voters who could decide the election.

Over and over, Trump tried to control the conversation, interrupting Biden and repeatedly talking over the moderator, Chris Wallace of Fox News. The president tried to deflect tough lines of questioning — whether on his taxes or the pandemic — to deliver broadsides against Biden.

Biden tried to push back against Trump, sometimes looking right at the camera to directly address viewers rather than the president and snapping, “It’s hard to get a word in with this clown.”

But despite his efforts to dominate the discussion, Trump was frequently put on the defensive and tried to sidestep when he was asked if he was willing to condemn white supremacists and paramilitary groups.

“What do you want to call them? Give me a name. Give me a name,” Trump said, before Wallace mentioned the far right, violent group known as the Proud Boys. Trump then pointedly did not condemn the group, instead saying, “Proud Boys, stand back, stand by, but I’ll tell you what, somebody’s got to do something about Antifa and the left because this is not right-wing problem. This is a left wing problem.”

The vitriol exploded into the open when Biden attacked Trump’s handling of the pandemic, saying that the president “waited and waited” to act when the virus reached America’s shores and “still doesn’t have a plan.” Biden told Trump to “get out of your bunker and get out of the sand trap” and go in his golf cart to the Oval Office to come up with a bipartisan plan to save people.

Trump snarled a response, declaring that “I’ll tell you Joe, you could never have done the job that we did. You don’t have it in your blood.”

“I know how to do the job,” was the solemn response from Biden.

The pandemic’s effects were in plain sight, with the candidates’ lecterns spaced far apart, all of the guests in the small crowd tested and the traditional opening handshake scrapped. The men did not shake hands and, while neither candidate wore a mask to take the stage, their families did sport face coverings.

Trump struggled to define his ideas for replacing the Affordable Care Act on health care in the debate’s early moments and defended his nomination of Amy Coney Barrett, declaring that “I was not elected for three years, I’m elected for four years.”

“We won the election. Elections have consequences. We have the Senate. We have the White House and we have a phenomenal nominee, respected by all.”

Trump criticized Biden over the former vice president’s refusal to comment on whether he would try to expand the Supreme Court in retaliation if Barrett is confirmed to replace the late Justice Ruth Bader Ginsburg.

As the conversation moved to race, Biden accused Trump of walking away from the American promise of equity for all and making a race-based appeal.

Recent months have seen major protests after the deaths of Black people at the hands of police. And Biden said there is systemic racist injustice in this country and while the vast majority of police officers are “decent, honorable men and women” there are “bad apples” and people have to be held accountable.

Trump in turn claimed that Biden’s work on a federal crime bill treated the African American population “about as bad as anybody in this country.” The president pivoted to his hardline focus on those protesting racial injustice and accused Biden of being afraid to use the words “law and order,” out of fear of alienating the left.