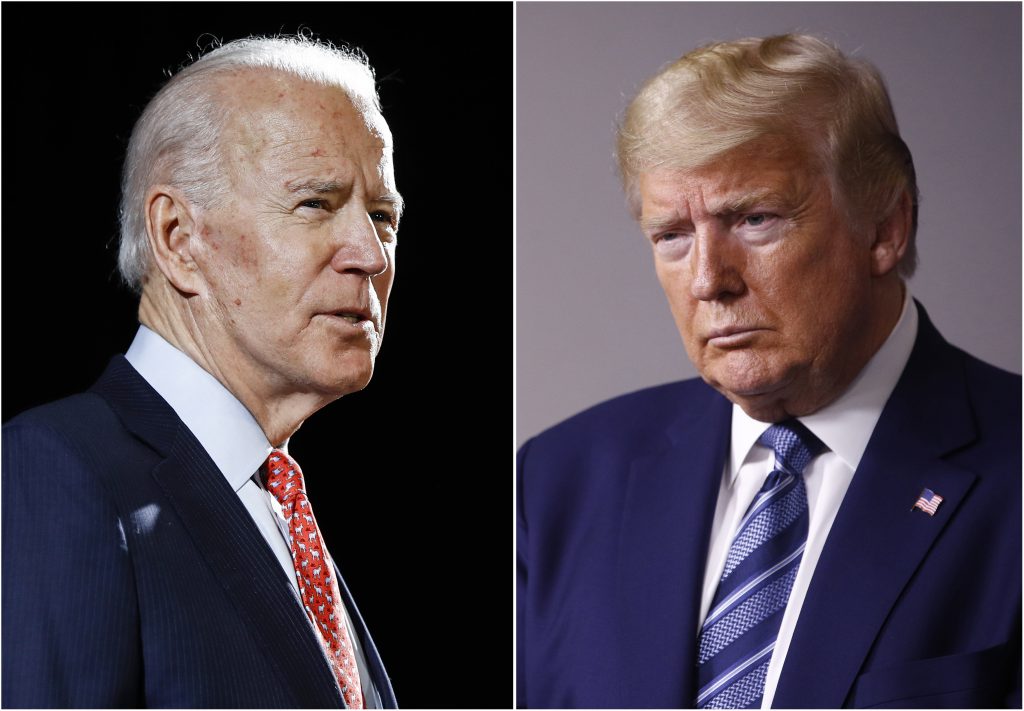 After months of trading barbs through social media, speeches, ads and two nominating conventions, President Donald Trump and former Vice President Joe Biden will meet face to face — and at least 6 feet apart — on Tuesday for the first presidential debate.

The debate will give both Biden, 77, and Trump, 74, a chance to demonstrate their mental agility after facing attacks from one another.

Both candidates have been preparing in their own ways. Biden is prepping with advisers, and the president is reviewing the former vice president’s 2008 and 2012 debates.

— What time is the debate?

The debate will start at 9 p.m. Eastern time Tuesday and last 90 minutes, with no breaks. It will be held at Case Western Reserve University in Cleveland.

The University of Notre Dame in Indiana had been planning to host, but the school announced in July that it was withdrawing because health and safety precautions would reduce the educational value for its students. Tuesday’s debate is being co-hosted by the Cleveland Clinic, which will advise the private, nonpartisan Commission on Presidential Debates on health security for all the debates.

The major news networks and C=SPANwill air the debate.

Chris Wallace, the anchor of “Fox News Sunday,” will moderate the debate.

Wallace led questioning at the third presidential debate between Hillary Clinton and Trump in 2016.

The president has claimed that Wallace will go easier on Biden.

“He’ll ask me tough questions, and it’ll show,” Trump said last week during a Fox News Radio interview. “It’ll be unfair, I have no doubt about it. But he’ll be controlled by the radical left. They control him.”

After months of making claims that Biden is mentally diminished, Trump is saying Biden has more experience in debates and promoting a theory that Biden takes performance enhancing drugs.

— What topics will be discussed?

The debate will consist of six 15-minute rounds on topics chosen by Wallace: Trump and Biden’s records; the Supreme Court; COVID-19; the economy; election integrity; and race and policing.

Wallace’s decision to frame the wave of anti-police brutality protests as “race and violence in our cities” has drawn criticism for appearing to fit the Trump campaign’s narrative on the nation’s state of civil unrest. Trump made the slogan “law and order,” as well as his support of police, a major part of his reelection pitch. Biden has belatedly denounced violent protests and riots, and said he opposes “defunding” police departments, although he has supported diverting funds from police budgetsto other programs.

Questions about the Supreme Court will almost certainly cover the debate over when the Senate should vote on a successor for Justice Ruth Bader Ginsburg following her death this month. On Saturday, Trump nominated Judge Amy Coney Barrett to the delight of conservatives; she would be expected to move the court further to the right on many issues.

Wallace will likely ask Biden if he supports adding more justices to the court, a proposal supported by liberals who worry Barrett would give conservatives a 6-3 majority and change the court for a generation. Adding more justices would require eliminating the Senate rule that requires 60 votes to pass major legislation — a proposal that has gained traction within the Democratic Party, and which President Barack Obama endorsed earlier this year.

— When is the next debate?

The only debate between Republican Vice President Mike Pence and Democratic nominee Sen. Kamala Harris of California is scheduled for Oct. 7 at the University of Utah in Salt Lake City.

The next debate between Biden and Trump will take place Oct. 15 at the Adrienne Arsht Center for the Performing Arts in Miami. A third presidential debate is set for Oct. 22 at Belmont University in Nashville. Those debates will also run from 9 to 10:30 p.m. Eastern time, without breaks.