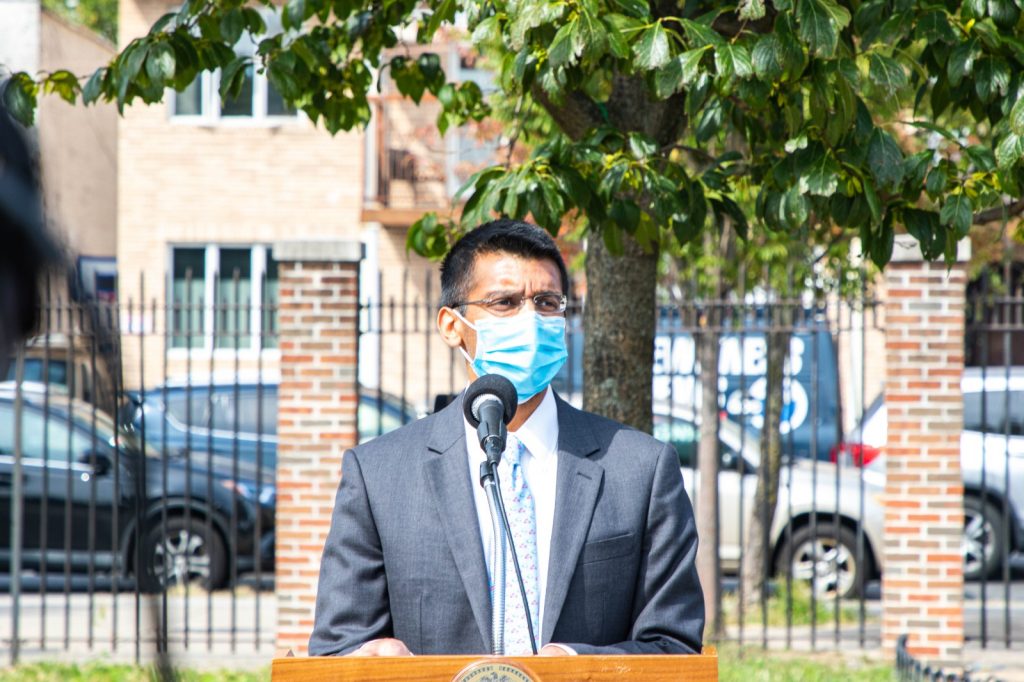 A press conference called Friday by New York City health officials regarding a spike in COVID-19 cases in some neighborhoods was shut down early due to two hecklers.

“This may be the most precarious moment that we’re facing since we have emerged from lockdown,” said Health Commissioner Dr. Dave Chokshi, at the press conference at a park at 18th Avenue and 56th Street in Boro Park.

The Health Department said Thursday that there are COVID clusters in a number of neighborhoods in Brooklyn and Queens, evidenced by a higher percentage of positive tests than the rest of the city, including Gravesend/Homecrest (6.0%), Midwood, (4.95), Edgemere Far Rockaway (4.08%), Kew Gardens (3.99%), Boro Park (3.53%), Gerritsen Beach/Homecrest/Sheepshead Bay (3.07%), and Flatlands/Midwood (3.06%). Since the beginning of August, the positivity rate across the city as a whole has been between 0.8 percent and 2.2 percent.

The Health Department warned in the press release Thursday that “if progress is not made by Monday evening” in these neighborhoods, the city may impose additional restrictions there, including prohibiting all gatherings of more than 10 people, issuing fines for refusals to wear a mask after being offered one, ordering private schools and child care centers to close if they don’t meet Education Department standards, and closing all non-essential businesses.

Chokshi and Dr. Mitchell Katz, President & CEO of NYC Health + Hospitals, spoke with community and school leaders Thursday about the increase in cases and how to prevent the spread of COVID-19 during Yom Kippur and Sukkos.

“We know that no area of New York City has herd immunity,” Katz said Friday.

“We will move as swiftly as the situation warrants,” Chokshi warned Friday, but said, “I want to ensure that the spirit of our message is that we are in service to our community, that we try to protect our family, and our loved ones.”

The Orthodox community in New York City had virtually not had any COVID-related hospitalizations for about a four-month period from late April until the recent uptick in late August, but a medical source in the community told Hamodia on Friday there have been five to ten hospitalizations daily during the past several weeks.

“We’re seeing clear signs of a rise,” said the medical source, who spoke to Hamodia on condition of anonymity. “While we are nowhere near the levels we saw in March and April, we want to stop this before it gets more serious. When the virus first hit, we had no warning. Now we have a warning; we need to heed it, especially during times that people usually gather, like on Yom Kippur and Sukkos.”

The speakers Friday, including Chokshi; Katz; Dr. Ted Long, Vice President of Health + Hospitals; and Dr. Jay Varma, Mayor Bill de Blasio’s Senior Advisor for Public Health, were frequently interrupted by a character in the community known for making whatsapp videos opposing government COVID restrictions. The individual cast doubt at notions of a COVID outbreak, at one point screaming at Katz, “When a man lies, you have to be interrupted … your reports are lies,” and repeatedly refused officials’ and reporters’ requests to don a mask as he yelled.

Later, another person, also maskless, entered the park and began yelling at officials to go to other neighborhoods, screaming at one Orthodox reporter, “You’re a disgrace with the yarmulke,” and shouting profanities.

The press conference was shut down after about 20 minutes, as officials decided they couldn’t proceed with the two shouting, maskless men.

Health + Hospitals had a tent in the park Friday, as it has all week, to offer free COVID tests to residents, and officials were distributing masks. Aside from the two hecklers, nearly everyone gathered in the park to watch and participate in the press conference was wearing masks.

Officials declined to cite a specific statistical benchmark that what would trigger the enhanced restrictions they had warned about in Thursday’s press release, but said they would look at a range of numbers.

“This is a disease that has challenges with how we measure it, so we look at a few indicators together,” said Varma. “One, we look at the total number of new cases that are diagnosed. The second is we look at the percentage of all tests that are performed that show a positive result. The third is, we also try to get some indication of the number of people that are actually being tested, because of course if you’re only testing a small percentage of the population, the numbers may not be quite as accurate as you want. And then the last is … looking at clusters or outbreaks. If you see evidence that there are multiple cases occurring in any specific setting, it’s usually an indicator.”

Health officials have been distributing literature, face coverings and hand sanitizer in the areas seeing a spike, and are publicizing their messages via robocalls, mailings, newspaper ads, and sound trucks.