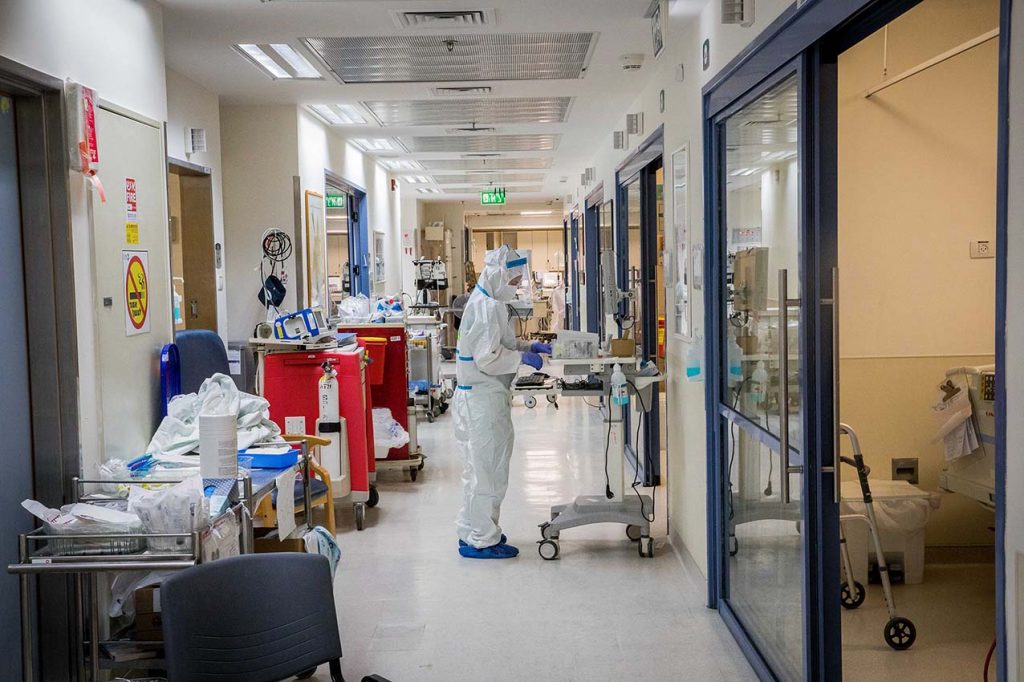 Ministers voted early Thursday morning to dramatically tighten Israel’s coronavirus lockdown amid fears that the infection rate is spiraling out of control.

The new restrictions come just a week after the current lockdown began and as new daily confirmed infections neared 7,000 for the second straight day.

According to the Health Ministry figures released Thursday, 54,364 people were tested on Wednesday and 6,808 were confirmed as carriers of the coronavirus. It was the second day in a row with over 6,800 confirmed cases, and officials have said they are especially worried about the 12.4% confirmation rate. Health Ministry Deputy Director General Itamar Grotto said last week that restrictions should only be lifted when that rate drops below 7%.

Beginning Friday at 2 p.m., nearly all businesses will be closed, with the exception of specific companies and factories specifically designated as vital by the National Emergency Authority. The decision, drafted Wednesday by the Coronavirus Cabinet and approved by the full Cabinet on Thursday morning, exempted supermarkets and pharmacies from the closure, and allowed restaurants to work on a home delivery basis only. The lockdown will last for at least two weeks.

Yom Kippur tefillos will take place almost entirely outdoors, with groups of up to 10 mispallelim permitted to daven inside shuls, the decision said. The shutdown will also cover the entire Sukkos.

The chagim is part of the reason the government was imposing the lockdown now, Prime Minister Binyamin Netanyahu said Wednesday. Since most Israelis in any case don’t work during Chol Hamoed, the economic damage of the shutdown would be reduced as fewer workdays will be lost.

“We’re headed to a shutdown in any case because of the morbidity rate,” Netanyahu said. “So it’s better to do it now, during the chagim, at a low economic cost, and not after the chagim when the economic cost will be higher.”

Rabbi Yaakov Litzman quit his Cabinet post last week over that exact issue – imposing the lockdown just over the chagim, when the same steps could have been made several weeks ahead of Rosh Hashanah.

Nearly all public transportation will be halted.

Israelis won’t be allowed to travel more than one kilometer (0.6 miles) from their homes. Police will be deployed on highways and at the entrances to cities and towns to ensure residents don’t attempt to travel during the lockdown.

The Cabinet is also reportedly considering closing Ben Gurion Airport to outgoing flights, but the decision was not included in Wednesday’s Cabinet vote.

The new rules come after a day of ongoing debates in the Cabinet over whether to allow anti-government protests during the lockdown, with the Blue and White party insisting a government could not order protests against it to be halted. Ministers also argued over how much to restrict tefillos.

Under a final compromise reached late Wednesday, shuls will close from Friday, open in a limited capacity and with mispallelim divided into small groups for the Yom Kippur tefillos, then close again on Monday night. A similar compromise was reached on protests, in which protesters may gather within a kilometer (0.6 miles) from their homes. In both cases, gatherings may include no more than 20 people at a time who must stay six feet apart.

While ministers considered declaring a “national emergency” to bypass the Knesset and impose the heightened restrictions, the new limits are nevertheless slated to come up in the Knesset plenum for approval on Thursday.