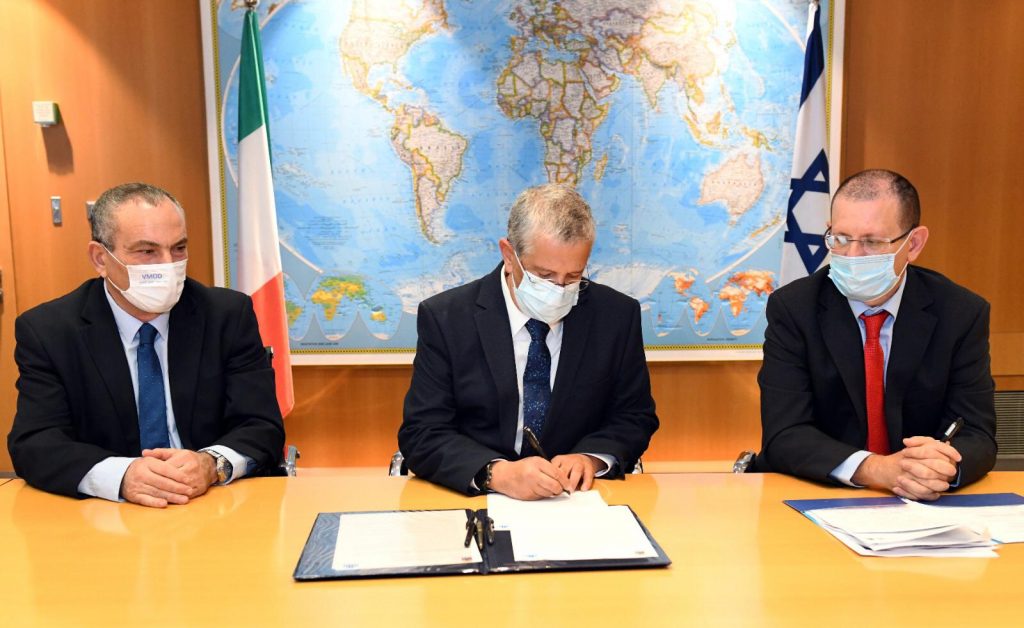 On Tuesday, Director General of the Israel Defense Ministry Maj. Gen. (Res.) Amir Eshel and his Italian counterpart, National Armaments Director Nicolò Falsaperna, signed a reciprocal procurement agreement, which completes the exchange between Israel and Italy that began in February 2019. The signing ceremony took place simultaneously in the defense headquarters of each country, one in Tel Aviv, the other in Rome, and was screened via secure video conference. The Defense Ministry team attending the ceremony included Head of Production and Procurement Avi Dadon, Head of the International Defense Cooperation Directorate (SIBAT) Brig. Gen. (Res.) Yair Kulas, Head of the Finance Department Victor Weiss, and additional senior officials.

The reciprocal procurement agreement constitutes purchases on both sides. The Israel Defense Ministry will purchase a “training package” from Italian defense contractor Leonardo. The package includes 12 AW119KX training helicopters and two simulators for the Air Force Flight School. The first seven helicopters were purchased a year ago, and an additional five were agreed upon today. The new aircraft will gradually replace the “Sayfan” (Bell 206) helicopters, which have been in service since the 1970s.

The Italian Defense Ministry will purchase Spike launchers and missiles from Rafael and advanced simulators for a number of helicopter models in the Italian military, from a partnership between Leonardo and Elbit Systems. This is a continuation of the 2011 agreement signed between the Israeli and Italian governments, in which the Israel Defense Ministry purchased 30 training aircraft in exchange for the purchase of an observation satellite and two airborne early warning systems.

Defense Minister Benny Gantz said, “I welcome the completion of this agreement, which reflects our close and important cooperation with the Italian Defense Ministry over the years. The completion of this agreement is essential for the training of IAF helicopter pilots and for the development of Israel’s economy. It also reflects the great importance of defense industries both for Israel’s security and its economy.”

Director General of the Israel Ministry of Defense Maj. Gen. (Res.) Amir Eshel said, “The agreement signed yesterday is another expression of the close security and economic relations between Israel and Italy. It enables the IDF to complete the replacement of the old training aircraft in the IAF. In addition, the reciprocal procurement agreement, which includes the purchase [of systems] from Israeli defense industries, positively affects Israel’s exports and economy.”