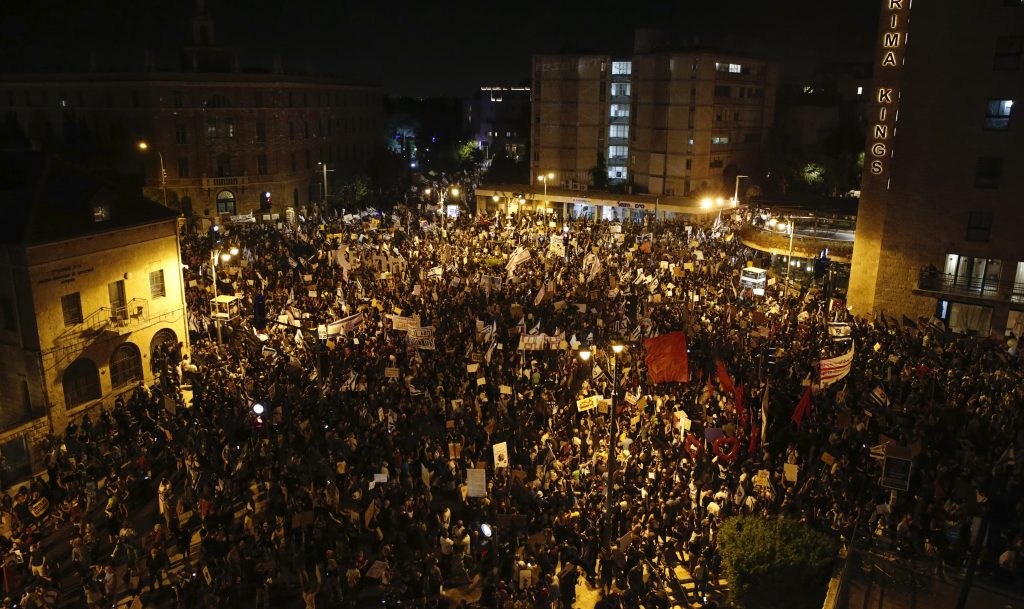 Channel 20 reported Tuesday that it has exposed the funding source of the three groups that stand behind the seemingly spontaneous protests held daily outside Prime Minister Benjamin Netanyahu’s residence, in an effort to overthrow him.

Last month the media outlet announced that there were 120 senior officials and philanthropists who have been working since the end of 2019 to overthrow Prime Minister Netanyahu, and that their work included submitting petitions to the High Court against Netanyahu’s ability to form a government.

Behind the Balfour protests stand the three largest and oldest organizations among the protest groups. They set up a trust account, managed by Adv. Dafna Holtz Lachner, which is supervised by a committee whose members are Carmi Gilon – former GSS chief; Dr. Arena Berry – former chief scientist of the Ministry of Industry, Trade and Labor; Professor Rivka Carmi – former president of Ben-Gurion University; and Orni Petrushka – businessman and philanthropist.

Leading the movement is Barak Hakamov, a businessman who has initiated a number of mass signatures against Netanyahu’s tenure as prime minister.

Channel 20 claims to be exposing the fundraising pipeline that connects donors to the three organizations. Ads asking the public to contribute to the trust account make it clear that all donations will reach the three major protest organizations. But who are these donors and how much money has been raised?

Protest organizations, have a lot to hide. Another media outlet previously exposed the person behind the Black Flags organization: then the former prime minister and Netanyahu’s political enemy – Ehud Barak.

Last week, a sign was hung on Dizengoff Center. It read, “It will not end until you resign – We’re going up to Balfour!”

The media interviewed Maya Mann, who owns a clothing store in the center. She claimed to be the one who led the campaign to fund the sign. “I have never been a politician,” Mann testified, and only now, realizing that the prime minister is “leading us to a dictatorship,” she decided to mobilize. Another example of a spontaneous uprising of an individual?

But another body that has advertised and promoted the fundraising campaign for the giant sign is the Democrats. The organization also bothered to emphasize that the sign is a civic initiative of “78 citizens” who funded the cost of the sign. It turns out that the person who led the campaign to fund the sign, is Nitzan Weisberg, Ehud Barak’s niece and one of the leaders of the Democrats.

So it appears there is a method and that it works. The question that remains is will protest leaders who demand democracy decide to be transparent and publicize who is behind them?

When accosted, none of them admitted there was any truth behind the claims. As far as they were concerned, the protest were all the work of individuals, funded by their own pockets.