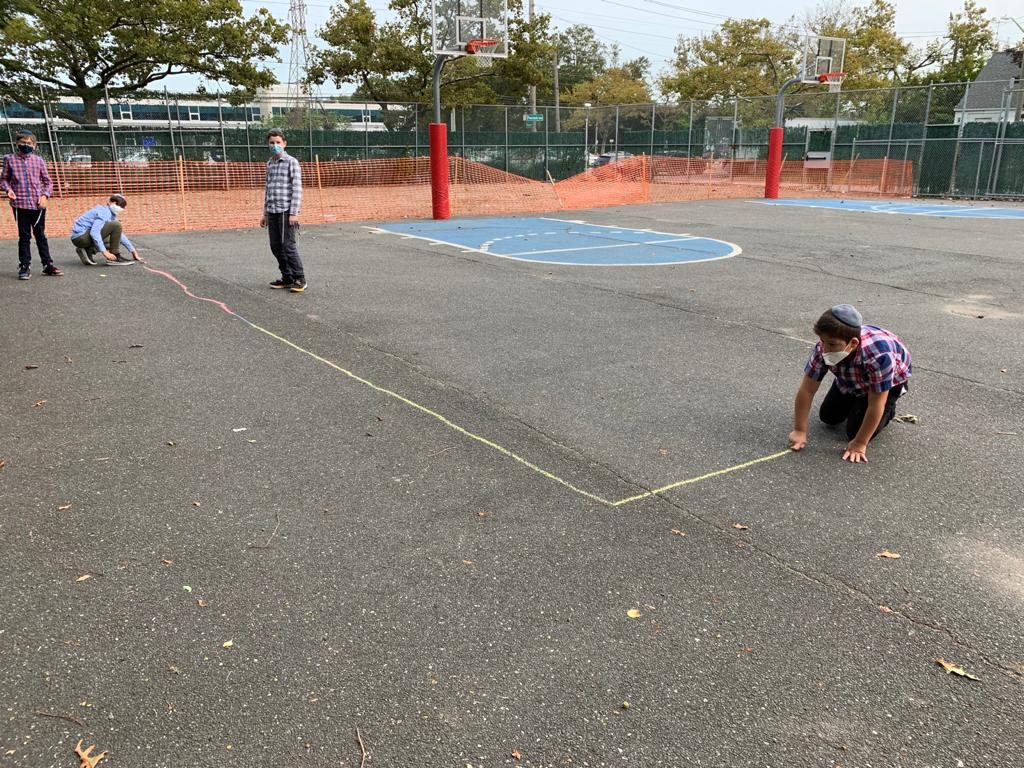 Since that fateful day in March when yeshivos and shuls closed their doors, the hanhalah and administration of Yeshiva of South Shore, together with a dedicated committee of parents, have worked tirelessly to ensure that the doors could be reopened in September. With much siyatta diShmaya, the dream became a reality, and the YOSS campus is once again pulsing with the vibrant sounds of children learning and growing.

It took many layers, including masks, barriers, cohorts, staggered schedules, creative usages of the facility, and so much more. While these layers may seem to be obstacles that separate the students from their Rebbeim, teachers and friends, the reality is that the trademark YOSS ruach and warmth continues to shine forth, and no amount of barriers can hold it back.

The boys are once again connecting to Rebbeim and teachers, and the smiles on their faces — even when masked — is the greatest proof that the rich and powerful mesorah is being transmitted to the next generation. When a child feels good about himself and experiences the sweet taste of success, no barrier in the world can stop him from wanting more and more. Although we daven for the day that corona is but a memory, we know that until then, the boys are growing, developing and thriving!

As we enter into the Yemei HaDin, we daven that our precious children be zocheh to remain in their yeshivos, and that their Torah learning be a zechus for us all!

“Community policing,” “engagement,” “backing the blue,” and the “thin blue line” are buzz words that have been floating around in recent years. Now, in the ever-changing environment that the men and women of law enforcement work in, these buzzwords have become part of who they are and the shifting roles that police officers play, while at the same time keeping civilians safe. Sadly, law enforcement is under attack, both physically and in spirit. They are demonized, antagonized, and disrespected. All the while, they are charged to remain calm, cool and collected, and perform their duties as effectively as they ever have.

In our community, we value law and order, respect those who put their lives on the line to keep us safe, and openly show support for the men and women of law enforcement as we “back the blue.”

This was perfectly exemplified on Sunday, August 23, by the volunteers of Hatzalah and RNSP Shomrim, as they joined police officers from Far Rockaway’s 101st Precinct in a friendly game of softball, The First Responders’ Annual Softball Game, a true kiddush Hashem prior to the Yamim Nora’im.

The players were all emergency responders from the NYPD, RNSP Shomrim, and Hatzalah of the Rockaways and Nassau County; the spectators were people who chose to come to the event, which was open to the entire community. A free barbeque lunch was made available to everyone. It was a fun-filled afternoon for the whole family to enjoy, while also showing support to the heroes who keep them safe and healthy every single day.

The day began with the singing of the National Anthem, as beautifully sung by RNSP Shomrim member and rising Jewish music sensation Yisrael Hoffman. It was a seven-inning game in the sweltering heat of a hot, sunny, summer afternoon.

During the 4th-inning stretch, something very special transpired. Hatzalah and RNSP Shomrim held a moving tribute in memory of Inspector Justin Lenz, the former commanding officer of the NYPD’s 101st Precinct and U.S. Army veteran. Sadly, this national and local hero died of a sudden heart attack earlier this summer, leaving behind a wife and two children, all of whom were present at this event. Needless to say, they were moved to the core by the honor bestowed upon their departed loved one.

Inspector Lenz was a man who kept our neighborhood safe as crime rates around the city soared. He was a leader who maintained law and order. At the same time, he was a visionary who embraced the initiative of community policing. To that end, the precinct piloted the NCO program, which of course was a smashing success that set an example for all other precincts around the city to follow.

Following the tribute in memory of Inspector Lenz, Hatzalah and the RNSP Shomrim surprised Police Officer Lynn Blanchette with honor and recognition for the outstanding work she does as the leader of the 101st Precinct’s expanded Community Affairs team. Through Ms. Lynn’s leadership, the relationship between all three emergency response groups remains as great as it has always been.

Additionally, Police Officer Blanchette makes it her duty to ensure that there are great relationships between the precinct and the community’s youth, seniors, schools, organizations, and religious institutions. She goes above and beyond to understand all of the different culture groups that make up and call Far Rockaway home.

As observant Jews, we know more than ever the complexities that come along with who we are, what we do and how we live our lives. We are so thankful to have someone running the affairs of our community, who treats our way of life with sensitivity, while doing the same for all other cultural groups residing in the area. It is for her leadership and disposition that Hatzalah and RNSP Shomrim recognized P.O. Lynn Blanchette for the work she does for our community.

In the end, the message was clear. Whereas the rest of the country is reeling from racial tensions, identity politics, and whereas law enforcement is under great scrutiny, the culturally diverse neighborhood that we call home is unified in its appreciation of the men and women who put their lives on the line to serve and protect us no matter what. This was the message of the First Responders’ Softball Game, and the message was made loud and clear and accepted by a united community. On the afternoon of August 23, we were truly “One heart, One community”!