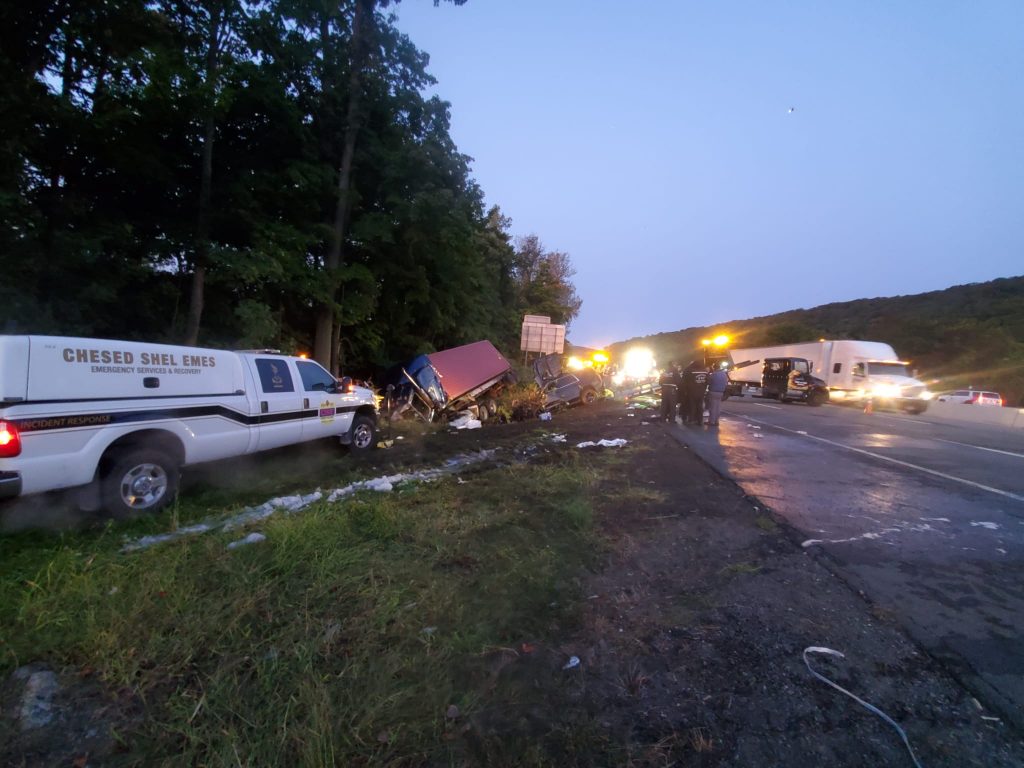 On Motzaei Rosh Hashanah, September 21, 2020, two young EMTs from Rockland County were killed in a fiery accident on the NYS Thruway. Moshe Herzog, z”l, 28, of Spring Valley and Dovid Schneebalg, z”l, 26, of Monsey, were pronounced dead at the scene of the crash.

The pair were returning from Pennsylvania where they served as onsite EMTs for a group who spent Rosh Hashanah together. At approximately 1:45 a.m., Moshe Herzog of Spring Valley, NY, was driving in his 2017 Chevrolet Tahoe traveling southbound in the center lane when he attempted to switch to the right lane apparently to exit the Thruway at exit 14B (Airmont Road). His SUV collided with a tractor trailer operated by Luis A. Velazquez, 59, of Elizabeth, NJ, which was traveling in the right lane.

Both vehicles were thrown of the roadway and ended up the right shoulder and came to rest in a ditch along the trees which line the highway. Both passengers could not exit the vehicle before it became fully engulfed in flames.

Velazquez, the driver of the tractor trailer, was entrapped and needed to be extricated from his truck. He was transported to Westchester Medical Center with unknown injuries.

As his vehicle lay in the ditch, Moshe Herzog, who volunteered often for Chaveirim of Rockland, called for help on his radio, pleading for assistance to free him from his car. Yossi Margaretten of Chaveirim was dispatching at the time and sent out an emergency request for help.

A Monsey Hatzolah member returning from the Catskills arrived quickly at the scene of the accident, and other members, knowing that one of their own was in danger, rushed to the scene and parked on the shoulder of the northbound lanes, jumping over the barrier in a valiant attempt to save the lives of the passengers. With the flames shooting up in the air, they could not reach the car. Police at the scene tried to extinguish the flames, but their efforts were unsuccessful.

“Moshe, who was a member of Chaveirim, had a heart of gold,” said Yossi Margaretten. “He was always willing to help  out, at all times and for all missions. In July 2019, I was in Virginia helping with the search for Rabbi Reuven Bauman. I returned to Monsey for Shabbos, and I knew I had to return to resume supervising the search on Sunday, but there were no flights until Monday. I called Moshe, asking if he was willing to drive me there, since I knew I couldn’t drive and then supervise the search the next day. He immediately agreed, and this was his response to any request. he first agreed, and then figured out how to manage his schedule. It is a tremendous loss.”

Troopers were assisted on scene by the William P. Faist Volunteer Ambulance Corps and Hatzolah EMS.

Moshe Herzog was a member of the Haverstraw Ambulance Corps, Chaverim of Rockland and was a lieutenant with William P. Faist Volunteer Ambulance Corps of Chestnut Ridge. Dovid Schneebalg had also been an EMT at Faist and Haverstraw.

Kevurah took place in the Monsey Bais Olam on Monday.