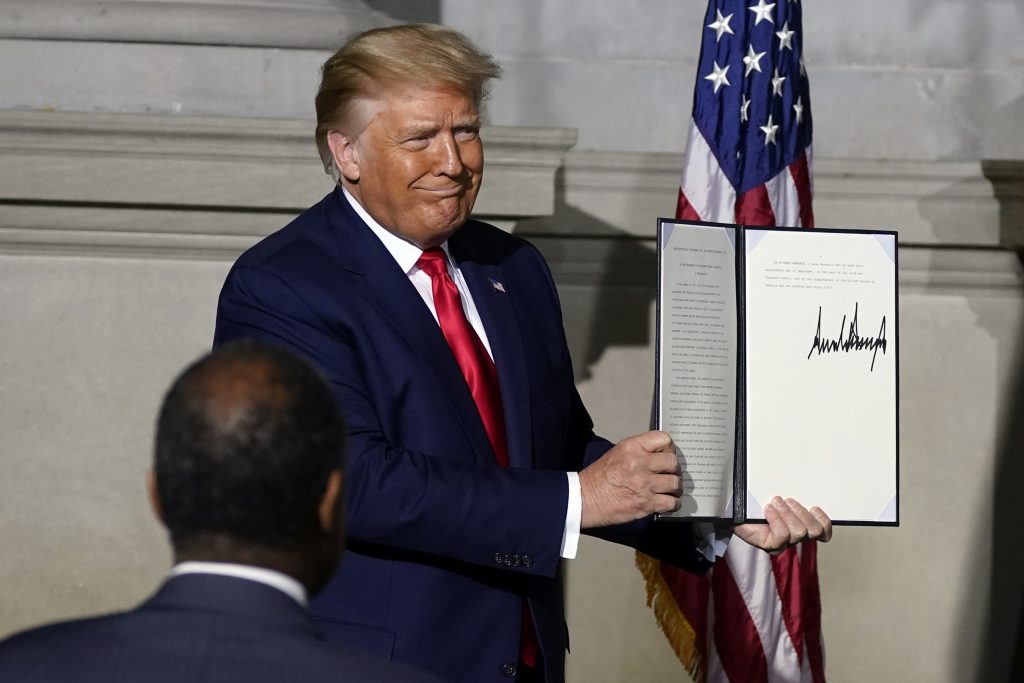 President Donald Trump pressed his case Thursday that U.S. schools are indoctrinating children with a left-wing agenda hostile to the nation’s Founding Fathers, describing efforts to educate students about racism and slavery as an insult to the country’s lofty founding principles.

Trump, speaking before original copies of the Constitution and Declaration of Independence at the National Archives, characterized demonstrations against racial injustice as “left-wing rioting and mayhem” that “are the direct result of decades of left-wing indoctrination in our schools. It’s gone on far too long.”

The notion that public-school curriculums are too secular or too critical of the nation’s legacy has been a frequent complaint of conservatives. Trump said he would create a national commission to promote a “pro-American curriculum that celebrates the truth about our nation’s great history,” which he said would encourage educators to teach students about the “miracle of American history.”

Trump is calling the panel the “1776 Commission,” in what appeared to be a barb at the New York Times’s 1619 Project. The project is a collection of articles and essays that argue that the nation’s true founding year is 1619, the year enslaved Africans were brought to the shores of what would become the United States. Trump said Thursday the 1619 Project wrongly teaches that the United States was founded on principles of “oppression, not freedom.”

“Patriotic moms and dads are going to demand that their children are no longer fed hateful lies about this country,” he said. “American parents are not going to accept indoctrination in our schools, cancel culture at work or the repression of traditional faith, culture and values in the public square. Not anymore.”

As he campaigns for reelection, Trump has repeatedly cast education that examines the nation’s failures as a betrayal, seeking to rally his base and tap into hostility toward protesters who have taken to the streets to denounce racial injustice and police brutality.

Trump’s speech Thursday was a continuation of a message he has pushed since the Fourth of July, when he declared at Mount Rushmore, under the gaze of George Washington and other titans of the presidency, that public schools are “teaching children to hate America.”

In a lengthy speech to the Republican National Convention, he pledged to restore “patriotic education.” And last month, when reflecting on the unrest that had erupted in U.S. cities over police brutality, he also blamed schools.

“What we’re witnessing today is a result of left-wing indoctrination in our nation’s schools and universities,” Trump said at a news conference. “Many young Americans have been fed lies about America being a wicked nation plagued by racism.”