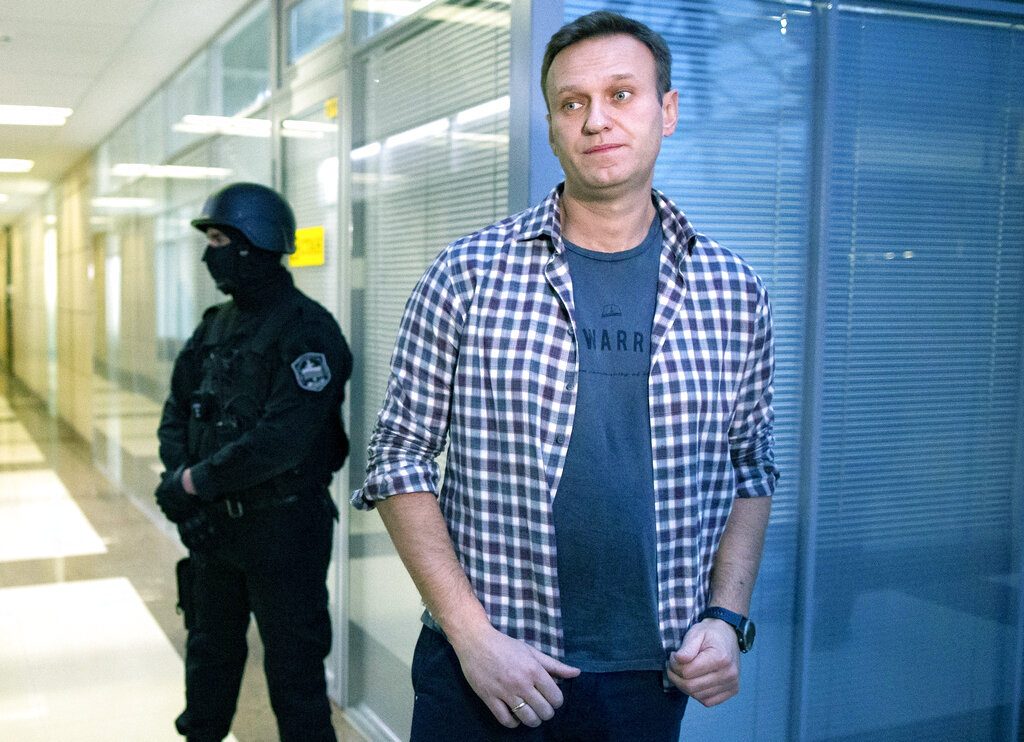 Colleagues of Russian opposition leader Alexei Navalny said Thursday that a bottle of water with a trace of the Novichok nerve agent was found in his hotel room in the Siberian city of Tomsk after he fell ill on a flight from there to Moscow last month.

Navalny later was flown to Germany, where he was kept in an induced coma for more than two weeks as he was treated with an antidote at Berlin’s Charite hospital. Members of his team accused the Kremlin of involvement in the poisoning, charges that Russian officials have vehemently denied.

The Kremlin has bristled at calls from German Chancellor Angela Merkel and other leaders to answer questions about the poisoning, urging Germany to provide its evidence.

On Tuesday, Navalny posted a picture of himself online from his hospital bed with his wife and children. “I still can’t do almost anything on my own, but yesterday I managed to breathe on my own for the entire day,” he added in the post.

Navalny’s spokeswoman Kira Yarmysh announced on social media that “Navalny had been poisoned with Novichok at the hotel before he went to the airport.”

Traces of Novichok were found on a bottle from the hotel room Navalny had been staying in before his flight.

A German military lab determined that Navalny was poisoned with Novichok, the same class of Soviet-era agent that Britain said was used on former Russian spy Sergei Skripal and his daughter in Salisbury, England, in 2018.

On Monday, the German government said independent tests by labs in France and Sweden backed up its findings. The Hague-based Organization for the Prohibition of Chemical Weapons is also taking steps to have samples from Navalny tested at its designated labs.

The Kremlin has said that Russian doctors who treated him in Omsk found no sign that Navalny was poisoned. Russia has repeatedly prodded Germany to share Navalny’s analyses and other medical data and compare notes with the Russian doctors.

German officials have responded to Moscow’s request for evidence by saying that Russian authorities must have the samples already since Navalny spent two days in the Omsk hospital.

Russian Foreign Minister Sergey Lavrov, who canceled a scheduled trip Tuesday to Berlin, said in a TV interview earlier this week that Russian authorities have conducted a preliminary inquiry and documented the meetings Navalny had before falling ill, but he emphasized that investigators need to see evidence of poisoning to launch a full criminal probe.

Lavrov accused the West of trying to smear Russia and use the incident as a pretext for new sanctions against Moscow. He argued that Navalny’s life was saved by the pilots of the plane who quickly landed in Omsk after he collapsed on board and by the rapid action of doctors there — something he said Western officials have failed to recognize.