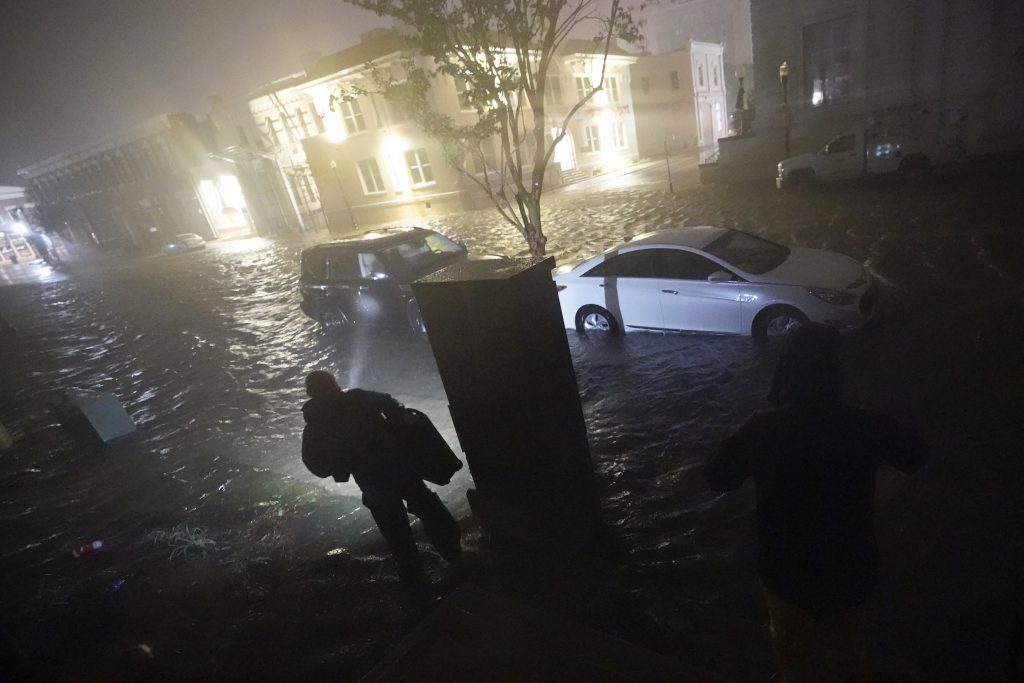 Hurricane Sally lumbered ashore in Alabama with 105 mph winds Wednesday, shoving a surge of seawater onto the coast and bringing torrential rain that forecasters warned will cause dangerous flooding from the Florida Panhandle to Mississippi and well inland in the days ahead.

Moving at an agonizingly slow 3 mph, the storm made landfall at 4:45 a.m. near Gulf Shores after raking the Gulf Coast with hurricane-force winds and rain from Pensacola Beach, Florida, westward to Dauphin Island, Alabama, for hours.

Emergency officials in Alabama and Florida reported flash floods that pushed water into people’s home. More than 2 feet of rain was recorded near Naval Air Station Pensacola, and some coastal spots got close to 3 feet, forecasters said.

“It’s not common that you start measuring rainfall in feet,” said National Weather Service forecaster David Eversole in Mobile, Alabama. “Sally’s moving so slowly, so it just keeps pounding and pounding and pounding the area with tropical rain and just powerful winds. It’s just a nightmare.”

Streetlights were knocked out in downtown Mobile, where a stoplight snapped, swinging wildly on its cable. Trees were bent over as the rain blew sideways in the howling wind. In downtown Pensacola, car alarms went off, the flashing lights illuminating the floodwaters surrounding parked cars.

Nearly a half-million homes and businesses had lost electricity by early Wednesday, according to the poweroutage.us site. A curfew was imposed in Gulf Shores hours before the storm’s arrival. Florida officials shut down a section of Interstate 10 near Pensacola because of high winds.

In the Panhandle’s Escambia County, Chief Sheriff’s Deputy Chip Simmons vowed to keep deputies out helping residents as long as possible. The county includes Pensacola, one of the biggest cities on the Gulf Coast.

“The sheriff’s office will be there until we can no longer safely be out there, and then and only then will we pull our deputies in,” Simmons said late Tuesday.

This for a storm that, during the weekend, appeared to be headed for New Orleans, about 200 miles to the west.

“Obviously this shows what we’ve known for a long time with storms — they are unpredictable,” Pensacola Mayor Grover Robinson IV said.

National Hurricane Center forecaster Stacy Stewart said the rain will be “catastrophic and life-threatening” over portions of the Gulf Coast, Florida Panhandle and southeastern Alabama.

The storm still had winds of 100 mph more than two hours after it reached land. Forecasters warned that heavy rainfall would continue into Thursday as the storm moved inland over Alabama and into central Georgia, with the threat of serious flash flooding.

“Sally has a characteristic that isn’t often seen and that’s a slow forward speed, and that’s going to exacerbate the flooding,” said Ed Rappaport, deputy director of the hurricane center.

He likened the storm’s plodding pace to that of Hurricane Harvey, which swamped Houston in 2017.

Sally’s effects were felt all along the northern Gulf Coast. Low-lying properties in southeastern Louisiana were swamped by the surge. Water covered Mississippi beaches and parts of the highway that runs parallel to them.

Sally hit just shy of three weeks after Hurricane Laura pummeled southwestern Louisiana on Aug. 27. Thousands of people were still without power from that storm, and some were still in shelters.

Meanwhile, far out in the Atlantic Tropical Storm Teddy became a hurricane with winds of 100 mph. It was situated more than 800 miles east of the Lesser Antilles. Forecasters said it was likely to become a major hurricane, reaching Category 4 strength on Thursday.