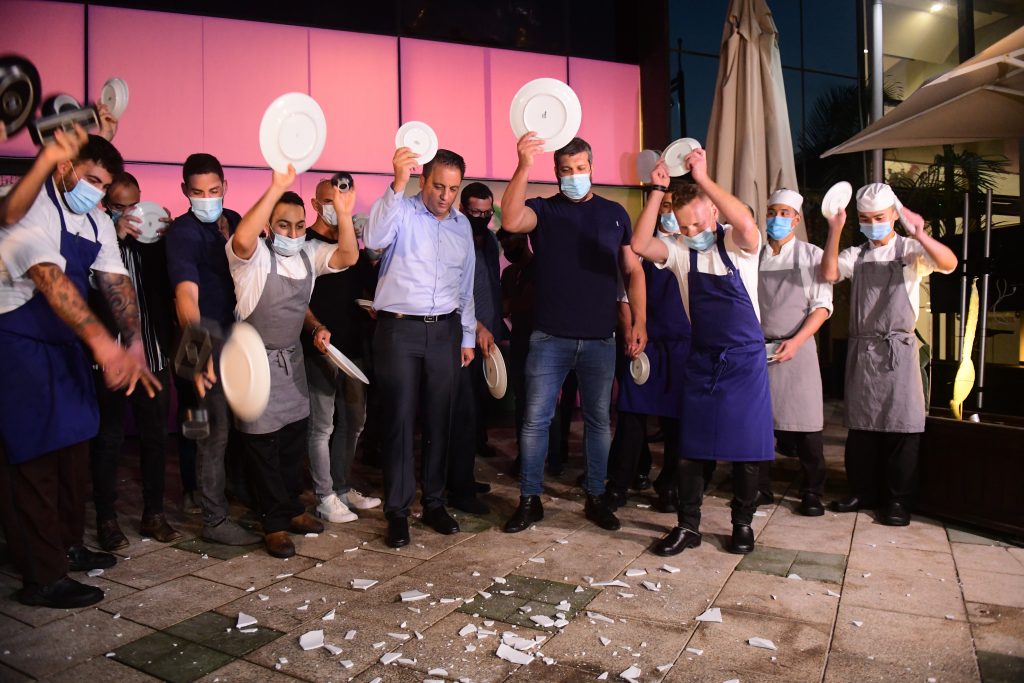 As the debate over a nationwide lockdown intensified on Wednesday, a group of petitioners from the fields of medicine, science, academia, law and journalism notified the government that they intend to petition the High Court to halt plans for the three-week closure.

In a letter notifying Prime Minister Binyamin Netanyahu‏‏ and other senior officials, required before submitting the petition, the signatories wrote: “We’re calling on cabinet members to cancel the planned nationwide lockdown. There’s no doubt that coronavirus is a dangerous disease, and we must fight it! But imposing a general lockdown is a collective blow to most of Israel’s residents.”

The letter questioned the scientific justification for such drastic measures, and the government’s presentation of the relevant facts.

“An independent examination done by experts in the relevant fields of medicine and statistics regarding morbidity and mortality rates caused by the virus, found that there are major gaps between what’s being told to the public and the actual scientific data that arises from various studies.”

The letter asserts that the fear of the hospital system collapsing under the burden of coronavirus patients has been exaggerated, adding that they believe there are currently some 450 patients in light condition who are being treated as though they were in severe condition.

According to Health Communication Lecturer at IDC Herzliya International School Dr. Yaffa Shir Raz, “The competent authorities have completely distorted the definition of the severely ill, the reasons for ventilating the patients defined as coronavirus patients, registration and reporting of the causes of death among coronavirus carriers; they’ve taken the sharpest, most offensive, and harshest step of all, without considering many other measures that are less harmful, and have caused the economy huge losses and deficits, which will inevitably also lead to cuts in the medical budget,” she was quoted as saying by Arutz Sheva.

“The conclusion that emerges from this is that the closure move now taken by the government and imposed on the entire population without any serious discussion of alternatives that are less harmful, and while ignoring the voices of many doctors who oppose Health Ministry policy, suffers from extreme lack of reason indicating foreign considerations,” Shir Raz said.

Doctors union chief Hagai Levine, a member of the coronavirus czar’s expert panel, was similarly scathing in his rejection of the lockdown plan, calling it the “stupidest and most hazardous solution” to the coronavirus crisis that could have been chosen.

“We should not shut down the country because of infected cases per day,” he told The Times of Israel. “This is more a media pandemic. The media is making such a fuss regarding the numbers. The scale we are at in hospitals is really relatively low,” said Levine, an epidemiologist.

Levine argued for a more moderate policy, that would also be more effective. “You need a balanced approach, not one that will kill the Israeli spirit. We could gain control over the pandemic with a rational plan that would lower infection.”

He suggested allowing life to continue, socially distanced and with one exception: a blanket ban on more than 10 people in the same indoor space.

He also criticized government officials for taking a narrow view of the crisis. “You have to look at the health of all populations, not COVID-19 only, and people don’t understand that you need to look at the overall picture,” he said. “They don’t see the healthy people who will become depressed, lose health because of economic reasons, become subject to [domestic] violence, or gain weight and die of a heart attack.”

Meanwhile, Yair Lapid kept his eye on the ball—decrying the lockdown and blaming Netanyahu for leading the country into it.

“This lockdown is a mistake: it’s a disaster,” Lapid said. “They’re shutting the country down in a move that isn’t properly planned and isn’t being done professionally. This lockdown won’t save lives, it will cost lives. Depression kills, hopelessness kills. People won’t go to hospital with a heart attack; the elderly will be at home on their own.”

“The [leader of the] only country in the world putting its citizens into a second lockdown, needs to resign first,” Lapid said. “It’s an admission of failure. The citizens are being punished because the government has failed. This lockdown isn’t necessary from a healthcare perspective. It’s a death blow to the Israeli economy.”