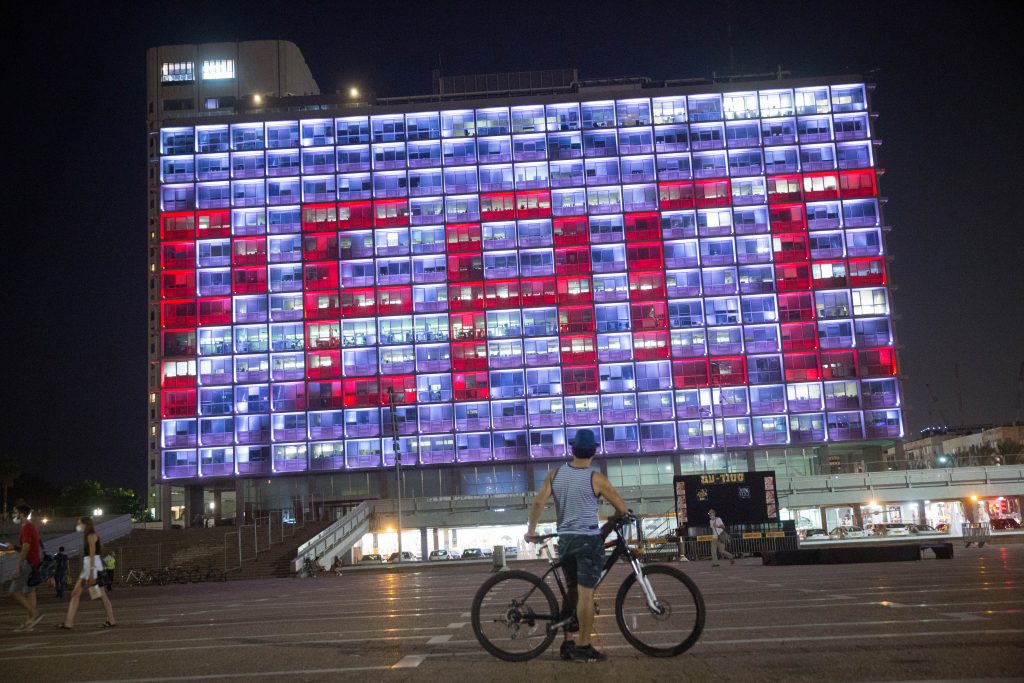 The reaction in Israel to the signing of normalization agreements with the UAE and Bahrain on Tuesday was enthusiastic, with banner headlines and official invitations to the countries’ leader to visit Yerushalayim.

The Yisrael Hayom daily emblazoned its front page with a large “Chatimah Tovah,” invoking the traditional Rosh Hashanah greeting in its coverage of the signings.

The facade of the Tel Aviv-Yafo Municipality building was illuminated on Tuesday night with the same message, “Peace,” in Hebrew, Arabic and English.

Newspapers in the Emirates were also on the bandwagon. Al-Ittihad ran Israel, UAE and U.S. flags, along with photos of Prime Minister Netanyahu and President Trump, calling it a “historic day,” Kan news reported.

Israeli columnist Ari Shavit threw skepticism to the winds, writing in Yedioth: “You can lift your head up from the coronavirus, from politics and shame and see how history is starting to flow in a new, secure channel. The Israeli-Arab conflict starts to end today. Peace.”

But only officialdom can extend invitations to foreign leaders. Accordingly, President Reuven Rivlin tweeted: “I would like to take this opportunity to address from here HH Sheikh Mohamed bin Zayed Al Nahyan and HH King Hamad bin Isa Al Khalifa. Thank you for your leadership and courage in making peace.

“I invite you to come to Jerusalem, the City of Peace, the city where members of all religions – can worship freely. Ahlan wa’Sahlan!”

Times of Israel editor David Horovitz noted that “on Monday afternoon, President Donald Trump’s adviser Avi Berkowitz posted a quite beautiful photograph on Twitter. It shows Jared Kushner, the president’s senior adviser and son-in-law, handing a Torah scroll to His Majesty King Hamad bin Isa bin Salman al-Khalifa of Bahrain, to be used in a synagogue in the kingdom.

“The moment is tender and moving — with the gazes of both men focused on the velvet-covered scroll rather than each other, respectful of it. It is a picture of transition and of trust — an American Jewish official entrusting an Arab monarch with the Jewish people’s most sacred text, for his safekeeping, to convey to a Jewish community free to practice its religion in his country,” Horovitz wrote.

“Kushner has called the process of peacemaking we are now witnessing between Israel and, so far, the UAE and Bahrain, ‘the beginning of the end of the Israel-Arab conflict.’ If that proves to be the case, this photograph may come to symbolize it.”

Here and there were also words of caution. For example, in Haaretz, Ephraim Sneh, who became the first minister to visit the UAE when he made a clandestine trip in 2001, writes that the ordinary people don’t necessarily reflect the attitudes of the Gulf leaders: “Anger at Israel is still prevalent although muted; what’s happening in the territories strongly influences these feelings.”

Journalist Barak Ravid claimed that the most Israelis are unmoved by the White House ceremony, preoccupied as they are with domestic crises:

“Netanyahu said that the agreements will bring billions in investments and help for the economy. He is correct. But the average Israeli dealing with existential health and economic worries will have a hard time seeing that. What are Dubai’s luxury hotels to someone who can’t make it to the next paycheck.”

The most discordant note was struck by Joint Arab List MKs.

“The ceremony in Washington is not a historic peace deal, but a historic arms deal,” tweeted JAL leader MK Ayman Odeh. “It’s accepting a reality in which the Palestinians live under occupation without independence or basic rights in exchange for planes and cyber systems. Few businessmen will benefit from this day, and everyone knows there is not a single person in the entire Middle East who will feel more free or more secure.”

Joint List MK Aida Touma-Sliman said on Twitter: “There were no Palestinians on the White House lawn this evening — this is not what peace looks like.”