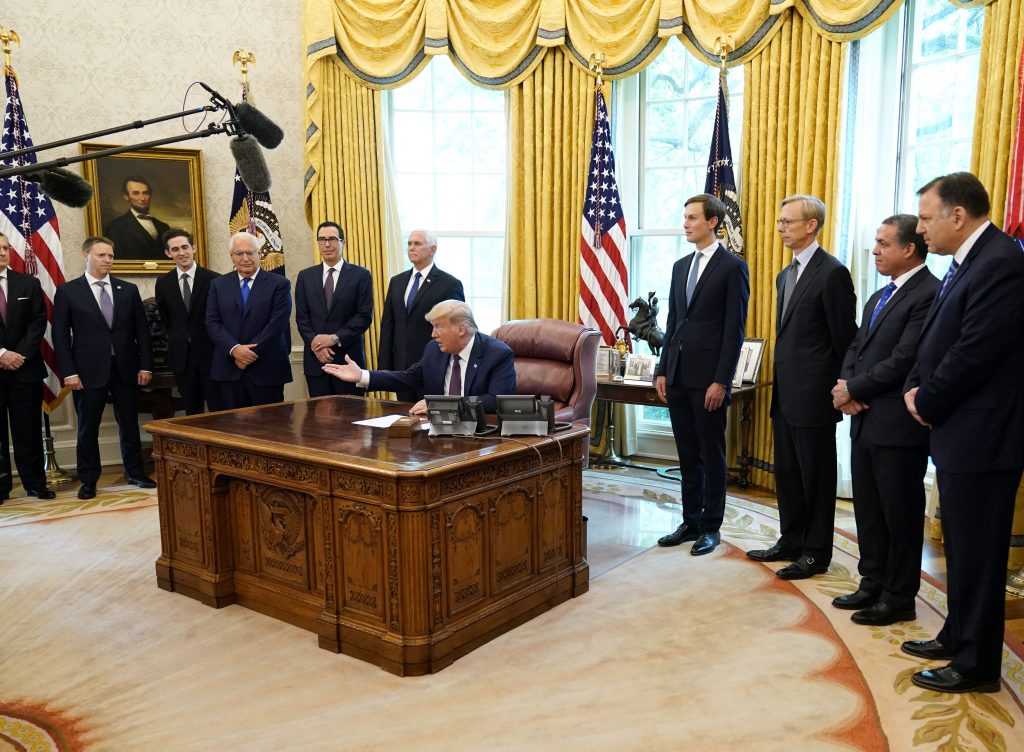 In the past two weeks, President Donald Trump has notched a string of diplomatic wins he’s highlighting with voters in the run-up to the election.

The Trump administration will host the leaders of the United Arab Emirates and Bahrain on Tuesday at the White House, where the two nations will formally recognize Israel. Trump officials also brokered an economic cooperation agreement between Serbia and Kosovo, bitter foes in the Balkan wars. And Trump has moved to withdraw U.S. troops from Iraq and Afghanistan and held U.S. talks with the Taliban, which paved the way for fragile all-Afghan peace negotiations that began last weekend.

The White House casts Trump’s recent flurry of foreign policy activity as evidence that long-sought initiatives are coming to fruition.

“He’s not running on his foreign policy,” Trump’s senior adviser and son-in-law Jared Kushner told White House reporters last week. “He’s running on his track record as the president who built the greatest economy in our country and somebody who’s going to keep Americans safe and continue to get things done for them.”

Kushner helped broker the UAE and Bahrain agreements, which the White House has labeled the most significant steps toward peace in the Middle East in more than a quarter-century.

Trump said the deals change the dynamics in the region. He predicts that other Arab nations will normalize relations with Israel and that the Palestinians will change their hardline stance against Israel. With an eye to recently being nominated for the Nobel Peace Prize, Trump says the deals are the beginning of a movement that will lead to peace in the Middle East.

Democratic presidential nominee Joe Biden said he was “gratified” by the UAE announcement. He said it builds on multiple administrations’ efforts seeking broader engagement between Israel and the Arab world. Biden supports a two-state solution to the long-running Israel-Palestinian conflict and has accused both Israeli Prime Minister Benjamin Netanyahu and Palestinian leaders of intransigence.

As for problems with Iran and North Korea that have bedeviled presidents for decades, Trump ‘s message is: Just reelect him and he’ll solve them.

Since Trump pulled out of the 2015 Iran nuclear deal, he’s stepped up economic pressure against Iran and killed top Iranian Gen. Qassem Soleimani in a drone strike in Iraq. Tehran, however, has continued to expand its stockpile of enriched uranium, while insisting it does not want to develop a nuclear weapon.

Biden said he’d re-engage with Iran on the nuclear deal that Trump jettisoned and look to craft a new multilateral agreement that would extend the original limitations on Iran’s nuclear ambitions, provided Tehran is willing to cooperate on inspections.

Victor Cha, a Korea expert at the Center for Strategic and International Studies, said things currently are calm with North Korea, but Pyongyang has a tendency to dial up pressure during U.S. presidential election seasons. About a month after President Barack Obama was elected, North Korea conducted a long-range missile test and then a nuclear test.

“If North Korea behaves true to form, then we should expect to see some sort of provocations — maybe not before but after the election,” Cha said.