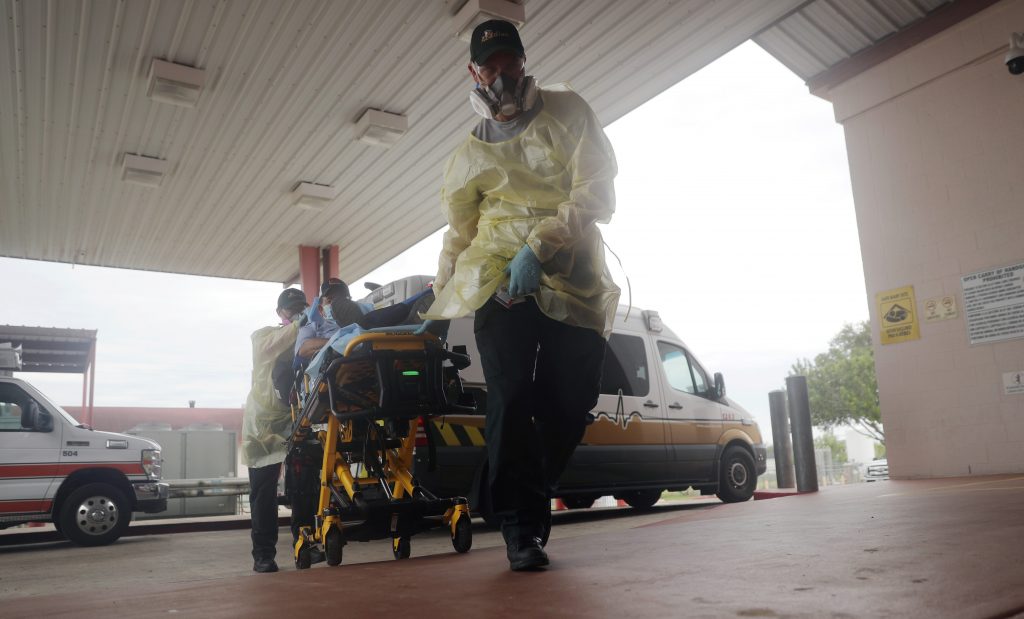 The number of daily U.S. deaths from the coronavirus is declining again after peaking in early August, but scientists warn that a new bout with the disease this fall could claim more lives.

The arrival of cooler weather and the likelihood of more indoor gatherings will add to the importance of everyday safety precautions, experts say.

“We have to change the way we live until we have a vaccine,” said Ali Mokdad, professor of health metrics sciences at the University of Washington in Seattle. In other words: Wear a mask. Stay home. Wash your hands.

The U.S. has seen two distinct peaks in daily deaths. The nation’s summertime surge crested at about half the size of the first deadly wave in April.

Deaths first peaked on April 24 at an average of 2,240 each day as the disease romped through the dense cities of the Northeast. Then, over the summer, outbreaks in Texas, California and Florida drove daily deaths to a second peak of 1,138 on Aug. 1.

Some states — Florida, Georgia, Mississippi, Nevada and California — suffered more deaths during the summer wave than during their first milder run-in with the virus in the spring. Others — Michigan, Pennsylvania, Maryland and Colorado — saw two spikes in infections but suffered fewer deaths the second time around.

Now about 700 Americans are dying of the virus each day. That’s down about 25% from two weeks ago but still not low enough to match the early July low of about 500 daily deaths, according to an Associated Press analysis of data compiled by Johns Hopkins University.

The number of people being treated for COVID-19 in hospitals in the summertime hot spots of Florida and Texas has been on a steady downward trend since July.

In Florida, the number of COVID-19 patients Thursday morning was less than 3,000 after peaking at more than 9,500 on July 23. Two weeks later, the state reached its highest seven-day average in daily reported deaths.

In Texas, about 3,500 people were hospitalized with COVID-19 on Thursday, a measure that’s been improving since peaking July 22 at 10,893.

A dozen states are bucking the national downward trend. Iowa, North Carolina, West Virginia and Kansas are among states still seeing increases in daily deaths, although none is anywhere near the death rates seen in the spring in the Northeast. Back then, the virus caught New York off guard and claimed 1,000 lives per day in that state alone, or five deaths per 100,000 people.

“Often, it’s hard to understand the trends when looking at the whole country,” said Alison Hill, an infectious-disease researcher at Harvard University. She noted that daily deaths are still rising in some metro areas, including Memphis, Sacramento, San Francisco and San Jose.

What’s ahead may be worse because the virus is likely to have a seasonal swing similar to other respiratory illnesses, Mokdad agreed.

“In the Northern Hemisphere, it’s hard to say we were lucky, but we were lucky that COVID-19 came at a time when seasonality was helping us,” he said.

Similar fears grip Europe. The number of new confirmed coronavirus cases spiked Friday in parts of eastern Europe, with Hungary and the Czech Republic registering all-time daily highs. Signs of the pandemic’s resurgence were also evident in Britain and the Netherlands. Hungarian Prime Minister Viktor Orban said his government was drafting a “war plan” to defend against another wave of infection.

Spain’s health minister pushed back against comments by President Donald Trump, who claimed Thursday that the United States had done “much better” than the European Union in fighting the pandemic.

“No one is in a position to give lessons, and with all due respect to the American nation, less so its current president,” Salvador Illa told Spanish public broadcaster TVE on Friday. “You have to be very careful when making international comparisons. Each country has its specificities when it comes to providing the data.”

Scientists do not yet know how much credit, if any, to give to treatment improvements for the decline in daily U.S. deaths. Doctors now use drugs such as remdesivir and tricks such as flipping patients from their backs to their stomachs.

Others insist better treatments must be making a difference.

“We have many more tools in September of 2020 than we did in March of 2020,” said Dr. Amesh Adalja, an infectious-disease expert at the Johns Hopkins Center for Health Security in Baltimore.

Vigilance is the byword for fall, Mokdad said.

“This is a deadly virus. It’s very opportunistic,” he said. “It waits for us to make a mistake.”