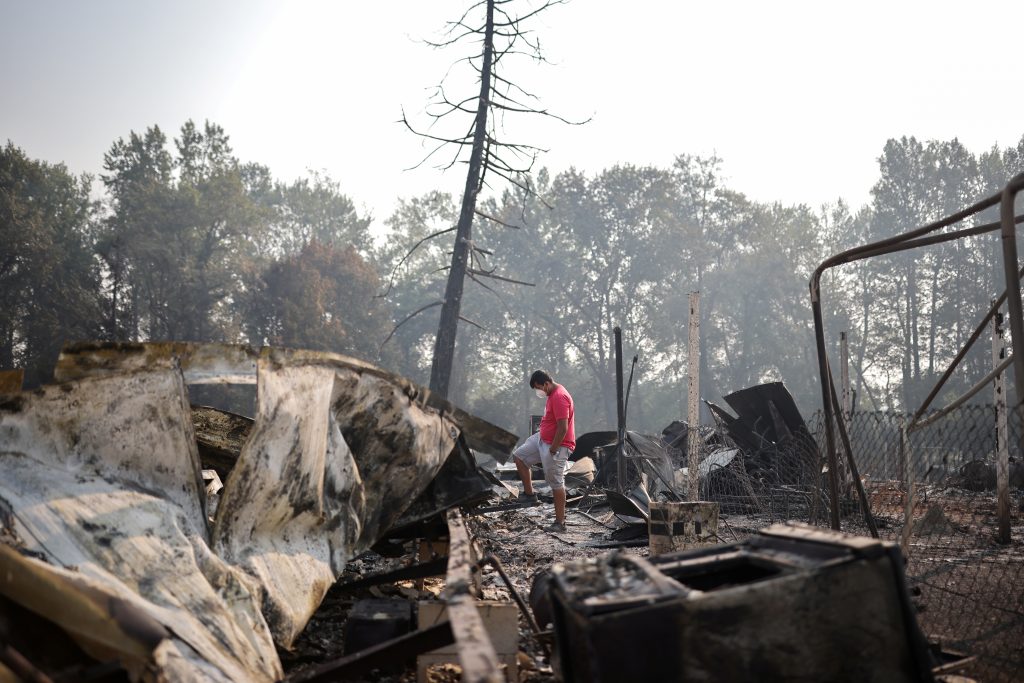 In the past 48 hours, three people died from a lightning-sparked fire in northern California, while three were reported dead in Oregon and a 1-year-old boy died in Washington state, police reported. Hundreds of thousands have evacuated their homes in the three states.

The blazes tore through at least five communities in Oregon’s Cascade mountain range as well as areas of coastal rainforest normally spared from wildfires.

East of Salem, Oregon, search and rescue teams entered destroyed communities like Detroit where firefighters led residents on a dramatic mountain escape after military helicopters were unable to evacuate the town.

To the south, most of the city of Medford, population 82,000 residents, was told to evacuate or prepare to evacuate as fires burned around the city.

A Reuters photographer saw nearby small communities including Bear Lake Estates reduced to ashes as he drove south on Interstate 5 towards Ashland.

Some people counted their blessings after fleeing the Bear Creek trailer park, where nearly every home burned. Fire moved north up the highway, wiping out whole subdivisions where embers touched down.

“Thank God we were at home,” said Julio Flores, a resident of the community who escaped with two children who would have been alone had his restaurant working hours not been cut due to the coronavirus pandemic.

“When it really gets windy these embers are going for miles,” said Firefighter Andy Cardinal in Eagle Point, north of Medford where the town of around 10,000 was prepared to evacuate.

Oregon Governor Kate Brown on Wednesday said the state was facing perhaps its greatest ever loss in lives from wildfires, with the communities of Blue River and Vida in Lane County and Phoenix and Talent in southern Oregon largely destroyed.

The fires have caused power outages up and down the west coast, with about 60,000 homes and businesses in Oregon without electricity on Thursday, according to local utilities. Portland General Electric in a statement Tuesday said it was receiving unconfirmed reports that some fires in the region may have been started by electrical equipment affected by heavy winds and debris. A spokeswoman had no further comment on Thursday.

In California, officials said some 64,000 people were under evacuation orders on Wednesday while crews battled 28 major fires across portions of the most populous U.S. state.