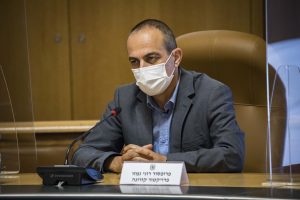 Israeli ministers have approved a plan for a full, two-week lockdown nationwide starting next Thursday night, after several hours of deliberations, according to media reports, although no official announcement has been made yet.

It was not yet clear how strict the lockdown will be, given that coronavirus project manager Ronni Gamzu had given the ministers four different options on Thursday.

Nor was it known whether any exemptions would be made for shuls during Rosh Hashana, Yom Kippur and Sukkos, as has been urged by the chareidi ministers.

According to Arutz Sheva, voting in the Coronavirus Cabinet was 8-4 in favor. The four opposed were: Economy Minister Amir Peretz, Finance Minister Yisrael Katz, Housing Minister Rabbi Yaakov Litzman and Interior Minister Rabbi Aryeh Deri. The four are said to favor imposing a night curfew instead of a full lockdown.

The decision will be brought to the full cabinet for approval on Sunday.