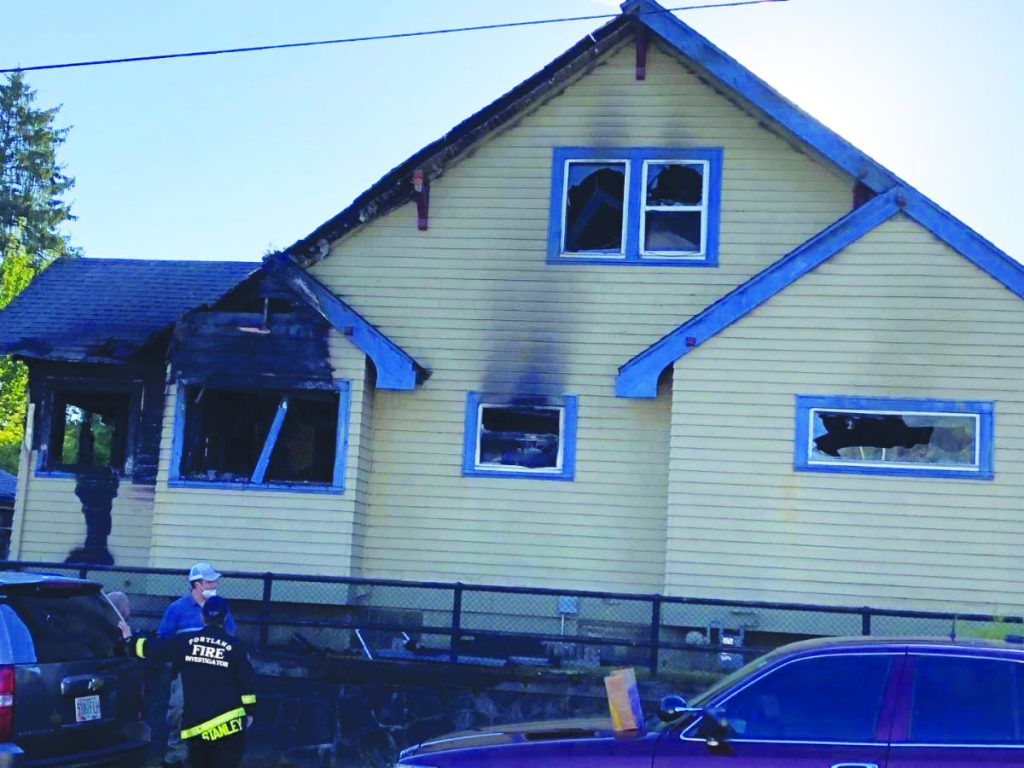 It began on Friday night, August 14, at about 10:30 p.m., when Rabbi Chayim Mishulovin of Chabad of Oregon’s Everything Jewish resource center, got a knock on his door at 10:30 p.m. notifying him that a fire had broken out at the Chabad House.

Rabbi Mishulovin, who lives a few blocks away, rushed to the scene, and saw a fire raging in the upper level of the building. Baruch Hashem, there were no people in the building at the time, but the fire ravaged the entire upper level, which houses the center’s offices. In addition, the fire tragically destroyed many sefarim, siddurim and machzorim that were stored there.

The cause of the fire was not immediately clear; the fire department was investigating a possible electrical fire as the cause. However, five days later, on Wednesday, August 19, a second fire erupted, which destroyed the main level of the building. In addition to housing the shul where weekday minyanim were held, the main level also was the site of a Judaica store, “Everything Jewish,” where community members could purchase mezuzos, tefillin, sefarim, and more. Consequently, approximately 60 mezuzos and eight pairs of tefillin were destroyed in this second fire.

After this second fire, at which point there was no gas or electricity running in the building, it became very clear that the fires had a “human cause,” having been set on purpose. The police investigation is ongoing, and the Chabad Center hesitated to publicize the case immediately, not wanting to interfere.

Since the first fire, the Chabad House itself has been closed. However, during the past few months, due to COVID, minyanim at the Chabad House were held outdoors, across the street, on the campus of the Maimonides Jewish Day School, run by Chabad. With much hashgachah pratis, the center’s sifrei Torah were located in the school building rather than at the center, and were therefore not affected by the fire.

Rabbi Motti Wilhelm, the Rabbi of Chabad of SW Portland, explains that the Southwest Portland Chabad was the first Chabad House in Oregon, having been established 36 years ago. The Maimonides Jewish Day School has an enrollment of 100 children, bli ayin hara, who come from all areas of Portland and beyond.

“Portland has a beautiful Jewish community, and this Chabad House is at the center of it all,” says Rabbi Wilhelm. “In this area, we have a hub of shuls, kosher food, and mikvaos. Baruch Hashem, for the past 36 years, we have had a wonderful relationship with both the Jewish community of Portland, and the general community. This event caught us all off guard — this is not the Portland that we know. We know of a very welcoming community. Therefore, we are trying to understand the causes and motives. Was it just general restlessness, or was it specifically targeted to Jews? The investigation is still ongoing, and so far, there are no clues.”

Nevertheless Rabbi Wilhelm is moving full speed ahead, and is preparing to begin the rebuilding process as soon as possible. “We are taking this incident as a message that we have to grow. We have to take what we have and build something significant, to serve the needs of our growing community. We must build something bigger and better than before.

“The halachah in Shulchan Aruch states that if one is rebuilding a shul, he must build day and night to replace it,” Rabbi Wilhelm emphasizes. “We are taking this message that halachah requires of us, and we will not stop until we build something significant.”