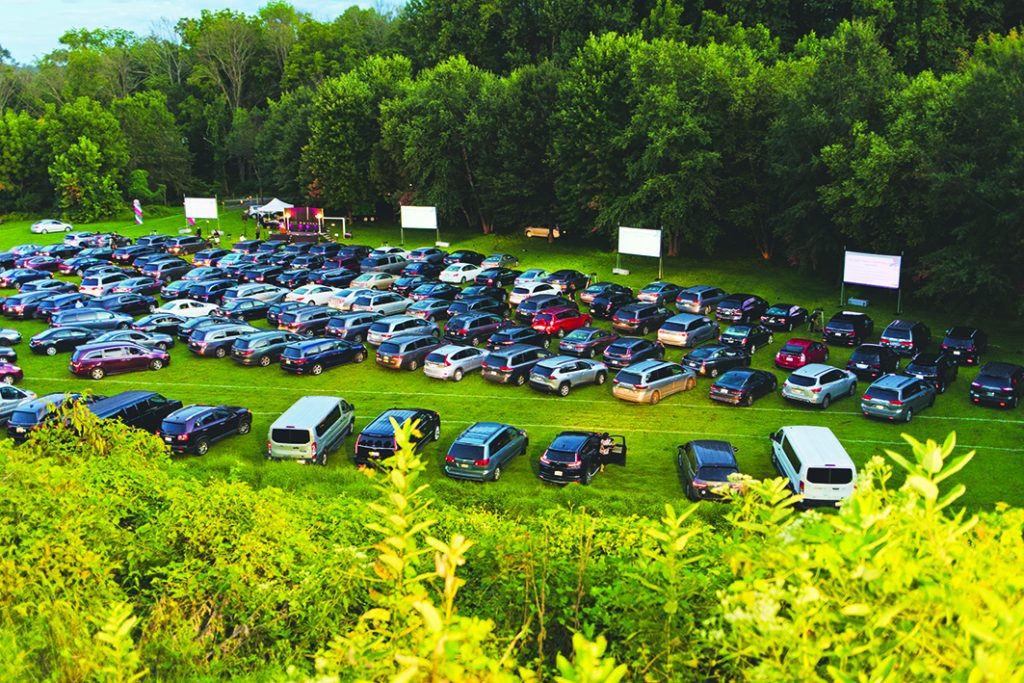 On Sunday evening, August 30, Bais Yaakov of Baltimore hosted a unique and sensational Gala Drive-In Event, An Evening of Inspiration and Appreciation to Bais Yaakov Teachers. The Gala Event had originally been scheduled for Monday evening, March 16, as Bais Yaakov’s first women-only event, celebrating the dedication of the very many devoted Bais Yaakov teachers. Tremendous effort, time and energy were invested by many to plan a truly memorable event.

However, COVID struck, the world shut down, and the event had to be canceled. Fast forward five months, and the Bais Yaakov administration decided to think creatively, and find a way to host the event in a different fashion.

With much siyatta diShmaya, a beautiful drive-in event was scheduled. With meticulous planning, guests arrived at Bais Yaakov’s Smith Avenue campus, were handed a package of tasty delicacies to enjoy during the program, and then proceeded to the school’s soccer field, where they were directed to park their cars. The program was then viewed on large video screens, with a supplementary audio broadcast available on car radios.

The event was emceed by Mrs. Perry Goldenhersh, who began by expressing her hakaras hatov to all the teachers of Bais Yaakov. “In normal times, your devotion is amazing. But recently, your dedication has been astounding… You have spent countless hours reformulating and reconfiguring, reframing and relating to best meet the needs of your students and pupils. We had to come together tonight to express it.”

On prerecorded video, principals, relatives, fellow teachers and students praised each of the honorees, highlighting their unique talents, dedication to their students and expertise in the classroom, and the teachers expressed their love for their jobs, for their students, and for Bais Yaakov.

Mrs. Estee Steinberg remarked, “Even though [Bais Yaakov] is a big, big school, the administration really cares for every single girl individually; besides the high academics, it is an all-around wonderful place.”

And Mrs. Brenda Willner asserted, “I feel very blessed — I love my job. It is very nice to get up in the morning and like to do what you are doing.”

The program concluded with a moving video presentation, produced by Miss Aliza Elman, with the participation of over 100 Bais Yaakov students and alumni, featuring a magnificent song with original lyrics, “Bais Yaakov of Baltimore: Our Eternal Link.” A dazzling display of fireworks concluded the event.

Rabbi Aaron Gross, Director of Development, explains the impact of the Gala Event. “As a school family, it was extremely important for us to hold this event and show our deepest appreciation for our teachers. With COVID upon us, we waited and hoped for the opportunity to celebrate the originally scheduled dinner indoors at some point. As that possibility continued to elude us over the passing months, we decided on an outdoor venue, and the concept of a drive-in event on our own beautiful campus was born.

“With the first day of school fast approaching, the window was narrowing and the last open day possible was the Sunday we chose. If weather became an issue, there would be no possibility of a rescheduled rain date. Baruch Hashem, we were zocheh and truly blessed with beautiful weather and able to pay proper tribute to our wonderful teachers, whom we wish the greatest hatzlachah in being mechanech the daughters of our Baltimore community.”