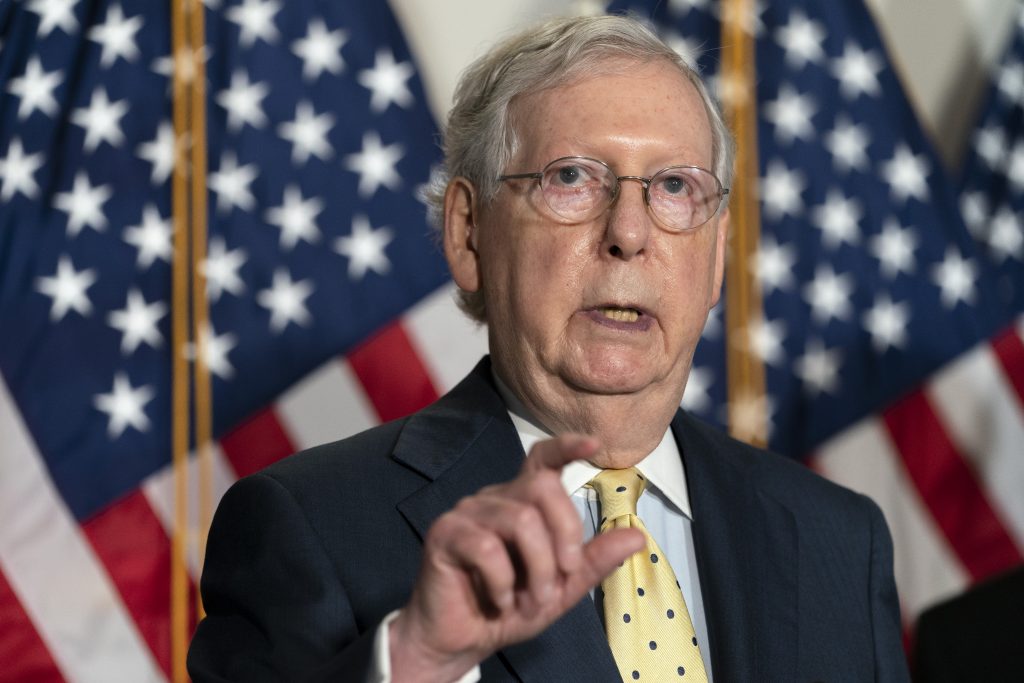 With the Senate poised to vote Thursday on a slender GOP coronavirus relief bill that’s certain to fail, chances for a bipartisan deal on new economic stimulus look more remote than ever. This impasse has prompted top White House officials to consider a new round of executive actions that they hope could direct funding to certain groups amid fears that the nascent economic recovery could fail to gain momentum.

White House officials have discussed efforts to unilaterally provide support for the flagging airline industry while also bolstering unemployment benefits, according to two people aware of the deliberations who spoke on the condition of anonymity to share internal policy discussions. The White House has also discussed moving without Congress to direct more money for school vouchers and changing President Donald Trump’s recent payroll tax changes to make it more effective.

Since then, the bipartisan urgency that propelled Congress to act with near-unanimity in March and April to approve an unprecedented $3 trillion in relief has eroded even further. In its place is bitter partisan bickering, with each side accusing the other of playing politics and acting in bad faith.

The Senate GOP economic relief bill would provide more money for small businesses, $300 weekly unemployment benefits and include a number of other GOP priorities such as lawsuit protections for businesses. It would not include a new round of stimulus checks or money for cities and states, a key Democratic priority. The bill needs 60 votes to advance in Senate, and it is expected to fall short in a procedural vote set for Thursday.

McConnell has been under pressure from a handful of vulnerable GOP incumbents who wanted to vote on a coronavirus-relief measure before going back to their states for the final campaign push. The new bill, even if it doesn’t become law, could aid in those efforts, some Republicans believe.

“I think the opportunity to signal their support for a targeted, responsible and responsive package this week is going to be essential,” said Sen. Todd Young, R-Ind., chairman of the National Republican Senatorial Committee.

Democratic leaders and top White House officials met in July and parts of August to try to reach an agreement on a new economic-relief package, concerned about the impact of expiring unemployment benefits, small business aid and eviction protections. But those negotiations faltered as both sides dug in, and sporadic efforts to revive them have failed.

Asked on Wednesday whether a bipartisan deal was possible, Treasury Secretary Steven Mnuchin said he was not sure.

“I don’t know, we’ll see,” he told reporters. “I hope there is. It’s important to a lot of people out there.”

“Well I don’t know. I hope that’s not the case,” the majority leader said when asked if he thought Congress would adjourn through the election without passing new coronavirus relief.

The only negotiations happening are on a stand-alone spending bill known as a continuing resolution, or CR, to keep the government from shutting down in October. The White House and Democrats have signaled a willingness to pass such a measure quickly before heading home to campaign for reelection, although they have yet to reach agreement on how long it should last.

McConnell said Wednesday that he would like to see the stopgap spending bill last into December, but Schumer said no decisions had been made.

“I think both parties want to get out of here and campaign,” Senate Appropriations Committee Chairman Richard Shelby, R-Ala., said. “The CR is the next order of big business to do and the cleaner the better, the quicker.”

Sen. Roy Blunt, R-Mo., said, “My guess would be that if we leave in September with a CR we will not come back to do anything before the election.”

That means any additional unemployment assistance or help for schools, health-care providers, cities and states, individual Americans, or the postal system looks to be bogged down.

Part of the stalemate is because Democrats and Republicans are drawing mixed messages from the economy. Some White House officials believe the stock market’s recovery since late March means the economy has regained its footing. The labor market has recovered roughly half of the jobs lost in March and April, but millions of Americans remain unemployed.

Many Democrats have said much more needs to be done to help the economy, while there is a significant bloc of Senate Republicans who have opposed spending any more money after the unprecedented stimulus in the spring. Pressure from this group forced McConnell to abandon a $1 trillion bill he introduced in July in favor of the legislation that will come to a vote Thursday, which costs about half as much.

Democrats have largely rejected the Senate GOP offering, saying instead that Republicans should negotiate from a $3.4 trillion bill that the House passed in May.

Despite polling showing keen public interest in the coronavirus, strategists on both sides say Congress’s inaction has barely broken through in contested House or Senate races.