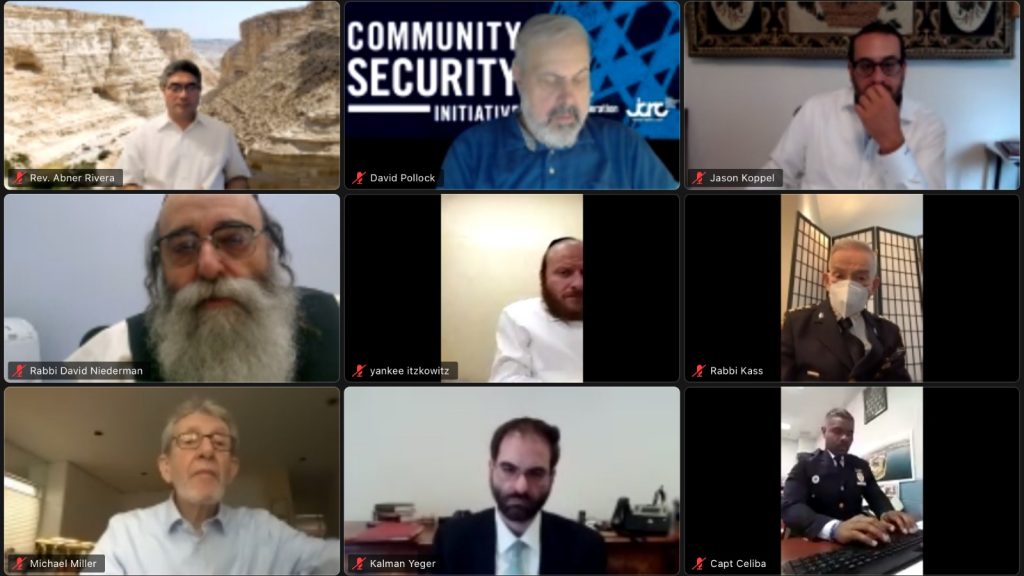 The briefing has been the largest yearly get-together at One Police Plaza between police brass, politicians, and Jewish officials, activists and rabbis, usually over a bagel brunch. But due to the COVID pandemic, this year a more limited event was held via Zoom.

“It was in many ways a very different city back when this event started” over 40 years ago, Police Commissioner Dermot Shea said. “But what hasn’t changed is our commitment to your safety, and our resolve to make sure you can practice your faith freely and openly. During the High Holy Days, as always, you’ll see an increase of professional police presence at synagogues during times of services and events.”

An overarching theme of the speeches at Wednesday’s event was the rising wave of crime in New York.

Police relations with some minority communities are at a nadir in the city and across the nation, following citywide and national protests since the May death of George Floyd, a black man in Minneapolis, while in police custody. Riots and looting occurred during the anti-police demonstrations in New York City, which coincided with a sharp increase in other crimes, particularly shootings and murders. Murders have risen 34% in the first eight months of 2020 compared with the same period last year, and shootings have spiked 87%. Social-justice advocates have alleged over-aggressive tactics by police in dealing with protestors and have passed laws restraining and defunding police, while law-and-order advocates have complained about what they deem to be police’s inadequate response to rising crime.

Rabbi Alvin Kass, the 84-year-old NYPD chaplain who recently made citywide headlines after being the subject of an unsuccessful mugging attempt (the perpetrator reportedly rifled through Rabbi Kass’s pockets, but fled when he discovered the rabbi’s police shield), said, “No society can survive without effective law enforcement,” quoting Deuteronomy 16:18, “Judges and officers shall you appoint in all your cities.”

“We are so blessed here in New York to have the greatest police department in the entire world,” Rabbi Kass said. “That doesn’t mean that it’s perfect; fallibility is the most conspicuous feature of mankind. That’s really what these High Holy Days are all about: They call upon us to engage in serious self-examination, with a view to striving towards ever-higher standards of conduct and behavior. It ought not be surprising that occasionally things go wrong. What is astonishing is that given the multiplicity of highly charged, life-and-death, split–second decisions that police officers have to make each and every day, things go right most of the time.”

A primary focus of Mayor Bill de Blasio’s crime-fighting strategy has been improving police relations with minority communities, where many of the shootings and murders have occurred.

Chief Jeff Maddrey, the newly appointed head of the NYPD Community Affairs Bureau, has been participating in a series of town hall meetings in these neighborhoods.

Maddrey said Wednesday that it is important “that we continue to address the negative sentiments about the police, that we continue to address gun violence and all the things that people want to use to tear down this great city. But we know as a police department, with our great partners in many communities, and especially in the Jewish community, that we’ll continue to work together, that we will put down this gun violence, that we will restore the faith and the trust in the police in the community, and all the things that we need to do to keep this city moving and thriving and strong.”

Anti-Semitic hate crimes continue to be a matter of concern in the city, despite a sharp decrease from 2019’s record-breaking levels.

Hate crimes overall have dropped 36% this year compared with the same period of 2019, Deputy Inspector Mark Molinari, Commanding Officer of the NYPD Hate Crimes Task Force, said at Wednesday’s briefing. Anti-Semitic incidents are down 53%, but still comprise 40% of all hate-crime complaints.

Last year, hate crimes rose 20% compared with 2018, fueled by a 26% spike in anti-Semitic incidents, which comprised 55% of all hate-crime complaints. Eighty percent of anti-Semitic crimes were non-violent, mostly property crimes related to the scrawling of swastikas.

Molinari noted that a portion of the higher numbers of hate crimes in recent years can be attributed to an increased NYPD focus in having victims report each incident.

There are currently no credible threats to the Jewish community in New York, officials stressed; the increased patrols around shuls are an annual event at this period in the Jewish calendar.

Jewish officials who spoke at the briefing said that while other communities are having difficult relations with police, and while many elected officials and other city and community leaders have been critical of police, they particularly wished to express the Jewish community’s support for New York’s Finest.

Addressing Commissioner Shea, Councilman Kalman Yeger said, “You have a [few] allies on the Council. I’m one of them; I know my colleagues next door and a few other places in the city are standing with you – not enough, but you do have a small handful. But I want to tell the folks who are listening that notwithstanding the chatter and the loud noise that a lot of folks are making, I know the Commissioner’s doing his best under immense attack to keep [the NYPD] whole, to keep it strong to keep it providing the safety that we need in our community.”

In response to a question posed by Josh Mehlman, chairman of the Flatbush Jewish Community Coalition, about what community activists can do “to assist [the NYPD] in fostering peace and serenity in our communities and the city in general,” Maddrey replied, “Continue to let the men and women of this Department know that we have friends out there who support us, who appreciate the work that we do. I think that goes a long way … It just needs to be heard loud, it has to be heard clearly … So when you’re driving by the precinct or you see the officers on the street, speak to them, let them know we have friends here, let him know we have people who support the tough work that we do.”

Captain Richie Taylor, commanding officer of Community Affairs’ Outreach Division, and the highest-ranking yarmulke-wearing NYPD officer, who moderated the event, told Hamodia afterward, “This is a difficult time for the NYPD and all of this great city, but we’ve been through challenges before, and with the help and support of New Yorkers from all communities, we will, G-d-willing, overcome this as well.”