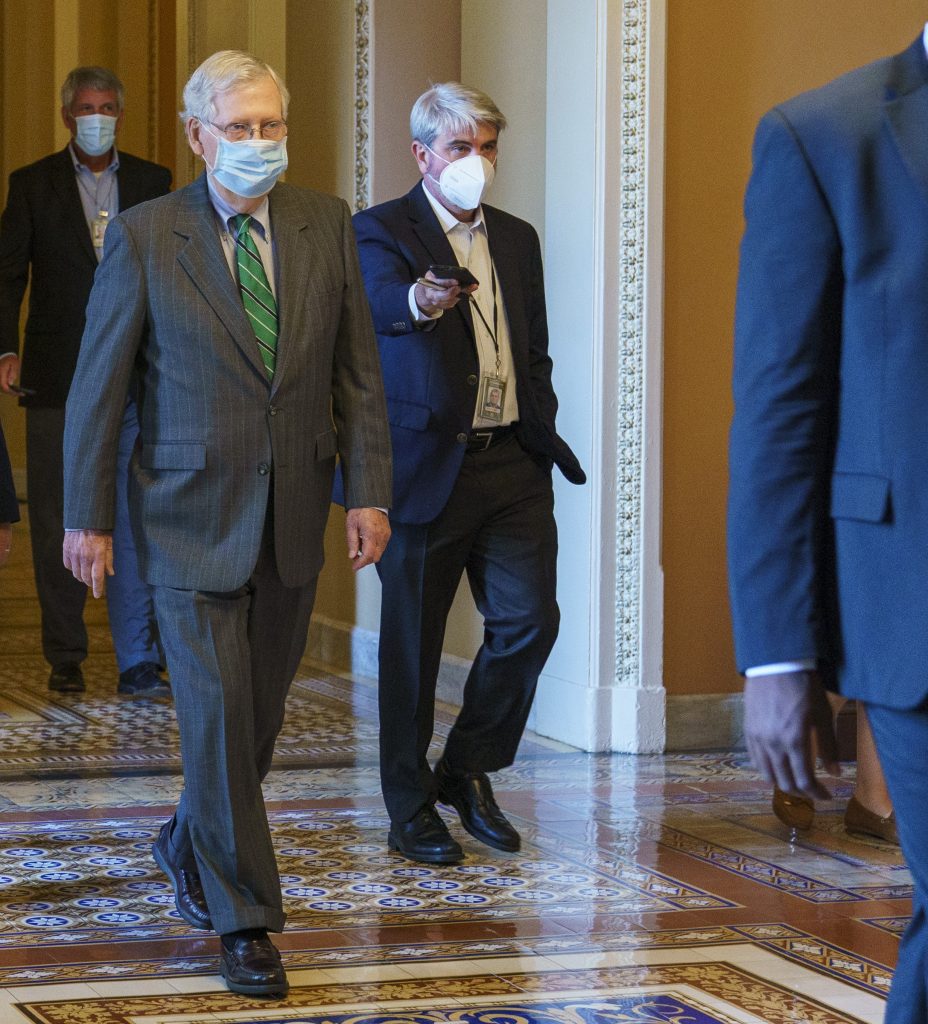 Senate Majority Leader Mitch McConnell unveiled a slimmed-down coronavirus relief bill Tuesday and announced plans to move to a vote later this week, an effort to put Democrats on the defensive after weeks of stalled talks.

The legislation is not expected to advance, since that would require support from Democrats, and House Speaker Nancy Pelosi, D-Calif., called the measure “pathetic.

A month after bipartisan talks collapsed on Capitol Hill, McConnell is aiming to pressure Pelosi and Senate Minority Leader Chuck Schumer, D-N.Y., with a GOP package that would spend about $500 billion on some key priorities including small businesses, enhanced unemployment insurance, child care, the Postal Service, coronavirus testing and schools. It also would create a type of liability shield for businesses to protect them from some lawsuits related to the coronavirus.

The Senate GOP bill is expected to kick off a frenetic flurry of legislating this month. In addition to the economic-relief talks, lawmakers must agree on a government spending bill in order to avoid a shutdown in October. Relations between Democrats and Republicans have soured markedly since the Spring, particularly as the November elections near.

In a statement Tuesday, McConnell said Pelosi had refused to negotiate on a targeted relief bill despite bringing the House back into session last month to pass a bill that would provide $25 billion for the U.S. Postal Service.

“Speaker Pelosi and Leader Schumer said a targeted deal on jobless benefits and the Paycheck Protection Program would be ‘piecemeal,’ but then Speaker Pelosi came rushing back to pass the most piecemeal bill imaginable: Postal Service legislation that completely ignored the health, economic, and education crises facing families,” McConnell said.

“Everything Speaker Pelosi and Leader Schumer have done suggests one simple motivation: They do not want American families to see any more bipartisan aid before the polls close on President Trump’s re-election. They have taken Americans’ health, jobs, and schools hostage for perceived partisan gain,” he said.

In a joint statement, Pelosi and Schumer dismissed McConnell’s bill, saying it “doesn’t come close to addressing the problems and is headed nowhere.”

Pelosi and House Democrats passed a $3 trillion measure in May that would have funded another round of stimulus checks, unemployment benefits, hospitals, and coronavirus testing, and would have provided $1 trillion to states and cities. The White House and Senate Republicans dismissed the bill and said they would not consider it.

In late July and early August, Pelosi and Schumer met multiple times with White House Chief of Staff Mark Meadows and Treasury Secretary Steven Mnuchin in an effort to come up with a compromise, which would not come to fruition. Democrats refused to consider a bill costing less than $2 trillion, and Republicans and administration officials dismissed that figure as too high.

The House and the Senate adjourned last month with no agreement. The Senate was coming back into session Tuesday afternoon, and the House returns next week, giving lawmakers one last chance to make a deal before adjourning through the election.

Senate Republicans and administration officials believe Pelosi will come under growing pressure from moderate members of her own caucus who face tough reelection bids and have been uneasy about the non-action on additional economic stimulus. McConnell’s new legislation is partly an attempt to attract the attention of such lawmakers.

“I’m optimistic in the next two weeks that the pressure and the voice of the American people will start to have an impact on members of Congress,” Meadows said Tuesday on Fox Business Network.

McConnell has been working with administration officials for weeks to finalize the new Senate GOP bill, which he is calling a “targeted relief package,” but he faced competing pressures from Senate Republicans. Some conservatives did not want to spend any more money after Congress dedicated about $3 trillion to pandemic relief in the spring; several vulnerable Senate GOP incumbents who are up for reelection in November have been eager to vote on generous new aid for their constituents.

A $1 trillion bill McConnell released in July was rejected quickly by many Senate Republicans, leaving the GOP without a unified position in the last round of negotiations. The new legislation would cost about half that much. In an effort to keep costs down and get conservatives on board, McConnell also decided to repurpose about $350 billion in unspent funds from Cares Act programs for the new bill, including $204 billion from a Treasury Department lending facility and $146 billion from the small-business Paycheck Protection Program.

The legislation includes $300 weekly enhanced unemployment benefits through the end of the year, to replace a $600 weekly benefit that expired for about 30 million unemployed workers on July 31. It does not include new money for cities and states, or new stimulus checks for individual Americans. The legislation does include more than $250 billion to allow small businesses to receive a second round of Paycheck Protection Program loans, $10 billion for child care support and $10 billion to forgive a loan from the Cares Act to the U.S. Postal Service.

The legislation includes a compromise aimed at resolving a dispute over a push by Sen. Ted Cruz, R-Texas, to include a tax credit to reimburse donations to state-level scholarship funds, which help families pay for private school tuition and other educational expenses. Some fellow Republicans opposed this idea, and McConnell’s legislation attempts to resolve it by including tax credits for two years instead of a permanent tax credit as Cruz had sought.

Other provisions include $105 billion for schools, $16 billion for coronavirus testing and tracing, $31 billion for vaccine development and distribution, and $20 billion for farm assistance.

The bill could serve as a new starting point for talks with Democrats, though it represents a significant step backwards from the administration’s posture in negotiations with Democrats before they broke down. Mnuchin has publicly cited figures as high as $1.5 trillion in discussing what the administration could agree to. There was no sign Tuesday of bipartisan talks starting back up.

Additionally, a better-than-expected August jobs report may have further reduced the urgency for action in the eyes of some Republicans. President Donald Trump and members of his administration have been speaking bullishly about the economic recovery they say is underway, even as millions remain unemployed.

“We can live with it – we can absolutely live with it,” White House economic adviser Larry Kudlow told Bloomberg TV last week when asked whether the administration would be willing to not reach a deal with Congress.

At the same time, Congress is facing a Sept. 30 deadline when agencywide funding will expire and the government will begin to shut down without action. Pelosi and Mnuchin have begun work on a move to extend government funding at existing levels through the election to avert a shutdown.