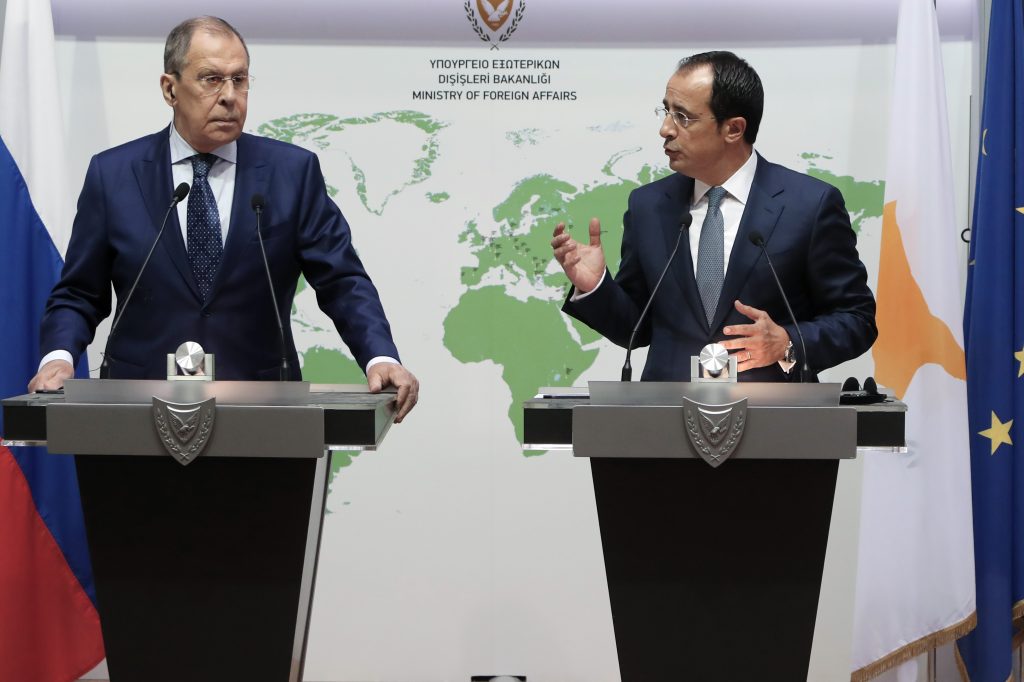 Russia’s foreign minister said Tuesday that Moscow is ready to help ease rising tensions over Turkey’s search for energy reserves in the eastern Mediterranean and rejected any actions that could lead to further escalation.

Sergey Lavrov said Moscow is ready to step in and help start talks if asked by all the countries involved in the tense standoff.

“Russia considers as unacceptable any steps that could further escalate tensions,” Lavrov said after talks with Cypriot counterpart Nicos Christodoulides.

“We would be ready to contribute to building good neighborly relations in the event this is requested of us by those involved,” Lavrov said, adding that Moscow has repeatedly called on leaders in the region to “resolve these differences through dialogue and within a legal framework.”

Greece and Turkey have faced off against each other in recent weeks as Turkish survey vessels and drill ships continue to prospect for gas in waters where Greece and Cyprus claim exclusive economic rights. Greek and Turkish armed forces have been conducting military exercises in the area in a show of muscle-flexing to underscore each side’s resolve.

European Union members Greece and Cyprus accuse Turkey of violating international law and of “gunboat diplomacy.” Turkey insists it’s defending its rights and those of breakaway Turkish Cypriots on ethnically split Cyprus to their rightful share of the area’s potential gas deposits.

“It’s therefore essential at this juncture for the international community to intercede with Turkey especially by all U.N. Security Council members like Russia with the aim of immediately ending Turkey’s unlawful actions and behavior that clearly don’t adhere to the framework of international law,” Christodoulides said.

The EU is mulling imposing tougher sanctions on Turkey over its “illegal” actions if talks fail to end the standoff.

Lavrov’s visit comes a month after Anastasiades asked Russian President Vladimir Putin to personally step in so that Turkey “is convinced to cease its unlawful actions.”

But speaking during a meeting with Cypriot President Nicos Anastasiades, Russia’s top diplomat also expressed Moscow’s concern over what he said was the U.S. attempts to stir up “conflict instead of peaceful solutions” in the eastern Mediterranean.

Lavrov was alluding to Washington’s decision to partially lift an arms embargo on Cyprus that was designed to prevent an arms race hindering United Nations-facilitated talks to reunify the island.

The embargo was directed against the southern, Greek Cypriot part of the island, where Cyprus’s internationally recognized government is seated.

Cyprus was split in 1974 when Turkey invaded following a coup aimed at union with Greece. Only Turkey recognizes a Turkish Cypriot declaration of independence and claims 44% of Cyprus’s exclusive economic zone as falling within its own continental shelf.

Washington said it was lifting the arms embargo against Cyprus for one year — with the option of renewal — to let it procure nonlethal equipment.

Turkey reacted angrily to the partial embargo lifting and announced that Russia would also be conducting live-fire naval exercises this month in areas in the eastern Mediterranean where Turkish research vessels are prospecting for gas.

Cyprus is striving to bolster relations with the U.S., but not at the expense of its ties with Moscow or Beijing, on whose support it often counts in the United Nations.

The U.S. ambassador to Cyprus, Judith Garber, said last week that the lifting of the embargo had no connection to “valued partner and ally” Turkey, but aimed to strengthen regional security and to “counter malign actors in the region.”

Garber said Washington waived a requirement that Cyprus cease to offer refueling and other port services to Russian warships, but that it would continue to “encourage” Cypriot government authorities to deny those services.

“We believe that Russia is playing a very destabilizing role in the region, especially in Syria,” Garber said.