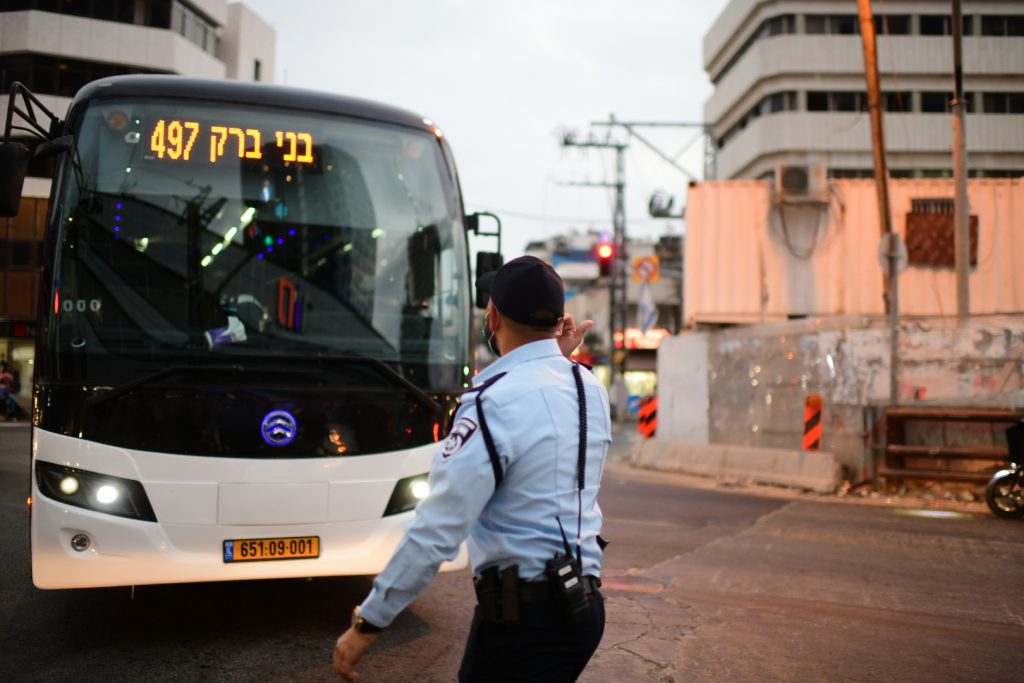 After several days of controversy and false starts, approximately 1,300,000 Israelis in 40 cities and towns around the country were under a curfew on Tuesday evening aimed at breaking the chain of coronavirus infection, which has soared alarmingly in recent weeks.

The nightly curfew, which runs from 7 p.m. until 5 a.m. the following morning, was set for a week, after which time it will be reassessed.

The latest containment measure comes on a day when all previous records for new infections were broken, as the Health Ministry said that 3,425 new coronavirus cases had been confirmed since the previous day.

“We have to keep to the Health Ministry’s guidelines. This is the only condition that will help us succeed in our fight against the coronavirus,” he said after a meeting with Beit Shemesh Mayor Aliza Bloch.

Bloch is one of several mayors who have protested classification of their cities as high- infection “red” zones, arguing that the data do not support such classification. She reportedly told Netanyahu that “the closures don’t work and should be lifted. We have to strengthen local authorities by giving them more powers.”

The government’s coronavirus czar, Prof. Ronni Gamzu, said in comments broadcast on Tuesday that “the rate of morbidity in the ‘red’ cities in Israel is among the highest in the world.

“Even the rates in ‘green’ cities [those with the lowest infection rates] are high. We must act to protect our people,” he said.

Gamzu said he “understands the difficulty” with the new restrictions. “We’re taking steps that are complicated and difficult for many Israelis. It’s hard for me personally. I know there’s anger and frustration directed at me. I have to be loyal to my professional truth — I’ve never imposed such steps before, but with this rate of infection I have to recommend these steps to the government. You have my sincere apology; don’t be angry with me personally.”

Gamzu himself was forced to enter isolation on Tuesday after a member of his staff was diagnosed with COVID-19. Gamzu has no symptoms and will continue with his duties from home, his office said.

In an unusual appeal for solidarity in the pandemic, Gamzu asked Israelis outside the “red” zones to also limit their movements.

“Any person who goes out tonight to a restaurant or event should think about that carefully,” he said. “Israel is one country. We’re trying to help the ‘red’ cities reduce morbidity. Please show some solidarity.

“We have to do two things: wear masks and avoid gatherings. Irresponsible politicians who call on the public not to obey [restrictions] are leading to anarchy and to people dying,” he said, alluding to a statement by Yisrael Beytenu leader Avigdor Liberman the day before, which had earlier been condemned by Netanyahu, President Reuven Rivlin and Defense Minister Benny Gantz.

Gamzu said that the current policy “is intended to slow the growth [of the infection rate], but it’s not certain that it will actually reduce it. We’re trying it out.”

The Education Ministry disclosed that 1,817 students in elementary, middle and high schools have caught the coronavirus since schools started a week ago. About 25,000 students are in quarantine after coming in contact with a confirmed carrier.

The new restrictions say that during curfew hours, residents must keep within 1,500 feet (500 meters) of their homes and nonessential businesses must remain closed. Schools will be closed at all times, except for special needs programs.

Residents are allowed to leave their homes in the following cases:

1. Going to work and returning from it, or transporting a person to and from work;

5. Taking part in a demonstration;

6. Participating in legal proceedings involving the person or in which they are required to take part;

7. Going to the Knesset;

9. Sports activities alone or with people living in the same household, up to 500 meters away from the house;

10. A brief stay or walk outside, alone or with people living in the same household, up to 500 meters away from the house;

11. Participating in levayah, bris milah, minyan, or chasunah of a first-degree relative;

12. Providing medical assistance or other necessary assistance to a person in need;

13. Transferring a minor whose parents live apart from one parent to the other;

14. Transferring a minor whose parent needs to go for a vital activity and has no one else in the house to take care of them.