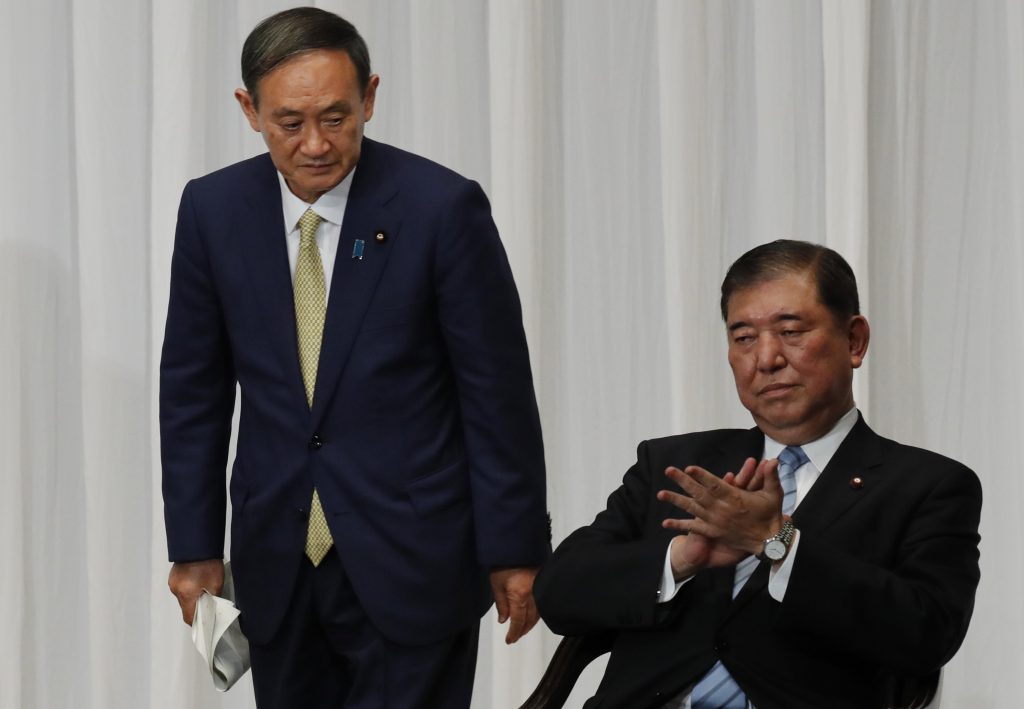 The winner of the in-party vote on Sept. 14 will eventually become Japan’s next prime minister because of the ruling bloc’s parliamentary majority. Abe is stepping down for health reasons.

Suga is a latecomer favored among party heavyweights as the best candidate to continue Abe’s policies. They have reportedly lined up to support him in hopes of getting favorable party and Cabinet posts in his administration. Newspaper opinion surveys have also shown Suga surpassing the former favorite Ishiba among the public.

Suga pledged to carry out the challenges left behind by Abe, including measures on the coronavirus and the economic fallout.

“I will succeed Prime Minister Abe’s policies and push them forward,” Suga said at a candidates’ speaking event. … As we face the national crisis, we should never allow any political vacuum, and there is no time to waste.”

He said coronavirus measures that would keep infections under control during the upcoming autumn and winter seasons, when another wave is feared, is the top priority. Suga said he hoped to secure coronavirus vaccines and treatment in the first half of 2021, a goal set by Abe in late August, while delivering economic measures to protect jobs, businesses and daily lives of the people hit by the pandemic “to regain a society where everyone feels safe.”

“We must prevent the explosive spread of coronavirus infections as in the U.S. and Europe, no matter what,” Suga said. “We will have to protect the people’s lives and health, while also maintaining economic and social activity.”

The son of a farmer in the northern prefecture of Akita, Suga is a self-made politician, a rarity in Japan’s largely hereditary business of politics and a particularly sharp contrast to Abe, the political blueblood whose grandfather was also a prime minister.

Suga said he has never lost affection for rural communities like his hometown and endeavored to break down bureaucratic barriers to serve the need and interest of ordinary people, including in disaster prevention, lowering cellphone fees and bolstering foreign tourism.

Suga also said Tuesday that he plans to establish a new digital agency to promote digital transformation, whose lack of progress has been criticized as a cause of slowing down coronavirus measures, in education, healthcare and other areas.

While Suga’s policies and projects seem to be achieving practical goals, his vision in diplomacy and security, areas where he is seen as lacking experience, is unclear.

Suga on Tuesday said only that he would pursue the “free and open Indo-Pacific” policy of regional economics and security promoted by Abe and promote stable relations with China and other Asian neighbors.

Ishiba, who has long been seen as Abe’s rival, is vying for the party leadership for the fourth time, calling for a change to the Abenomics economic measures to focus more support for small businesses and low-income earners as well as rural areas.

Ishiba called for a “great reset” of Japan by decentralizing Tokyo to revitalize local communities and other measures to rebuild the country. He also emphasized the need to rebuild Japan’s democracy, which has become a mere majoritarianism, and to address the economic disparity that widened under Abe’s administration.

Kishida, who is currently the party policy chief, says he seeks to be a leader who listens to the people’s voices more carefully than Abe and prioritizes economic policies to address disparities. He had been seen as a promising successor to Abe, but his status plunged over fumbled coronavirus policies within the party.