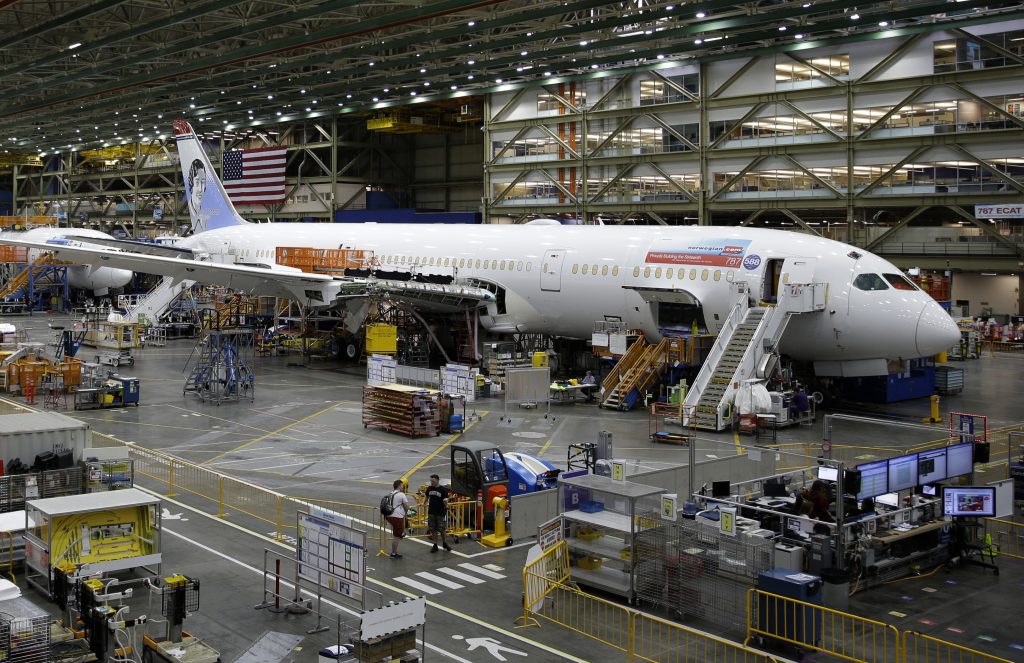 Boeing has recorded its first orders of the year for the grounded 737 Max, but a new flaw has surfaced in another of its planes, compounding the company’s struggle to recover during a pandemic that has undercut demand for new jetliners.

Boeing said Tuesday it is inspecting part of the tail of the two-aisle 787 after finding that pieces were clamped together too tightly, which could lead to premature fatigue of a part called the horizontal stabilizer.

The company said it believes the problem affects 893 of the nearly 1,000 787s that have been built. Boeing expects the inspections of recently finished planes to affect the timing of 787 deliveries in the near term, spokesman Peter Pedraza said in a statement.

The Federal Aviation Administration said it is investigating the matter.

“It is too early to speculate about the nature or extent of any proposed Airworthiness Directives that might arise from the agency’s investigation,” said the spokesman, Lynn Lunsford, referring to potential safety orders that could be imposed on Boeing.

Boeing disclosed last month that it found two other manufacturing flaws in the 787, which Boeing calls the Dreamliner and is built largely of carbon composite materials. The company grounded eight planes because of those issues.

The company said Tuesday that during production of the tail horizontal stabilizers at a Boeing plant in Salt Lake City, some parts were clamped together with too much force, resulting in improper gaps between sections. Boeing doesn’t believe it is an immediate safety issue but could lead to premature aging of the parts, and it is delaying some 787 deliveries while determining whether repairs are needed on planes that have already been delivered.

It is a popular plane among airlines for international routes. Cowen analyst Cai von Rumohr expected Boeing to deliver 13 787s. He said airlines are pushing back deliveries because international travel is so depressed.

Boeing’s slow pace of deliveries since early 2019, when the Max was grounded, has robbed the company of much-needed cash.

Amid the bad news around the 787, Boeing reported Tuesday that it received orders for five Max jets in August, two by Polish charter airline Enter Air and three by a buyer that Boeing did not identify. It also reported selling three 777 cargo freighters.

However, cancellations continue to outpace new orders, and Boeing has removed other sales from its backlog because the financial health of the airline customer makes the orders uncertain.

So far this year, Boeing has lost 932 more orders than it has gained. The pandemic has undermined air travel, leading to fewer flights and leaving airlines with no need for new planes.

Boeing is still working with U.S. and foreign regulators to clear the Max for return to flying after two deadly crashes. Nearly 400 Max jets were in use when the fleet was grounded worldwide in March 2019 after crashes in Indonesia and Ethiopia killed 346 people. The Max was Boeing’s best-selling plane.

Boeing dispatched a Max to Vancouver on Tuesday for flight tests this week with European regulators. The company has already conducted several test flights with FAA experts to demonstrate changes that Boeing made to computers and software after an automated system pushed down the noses of planes before they crashed.