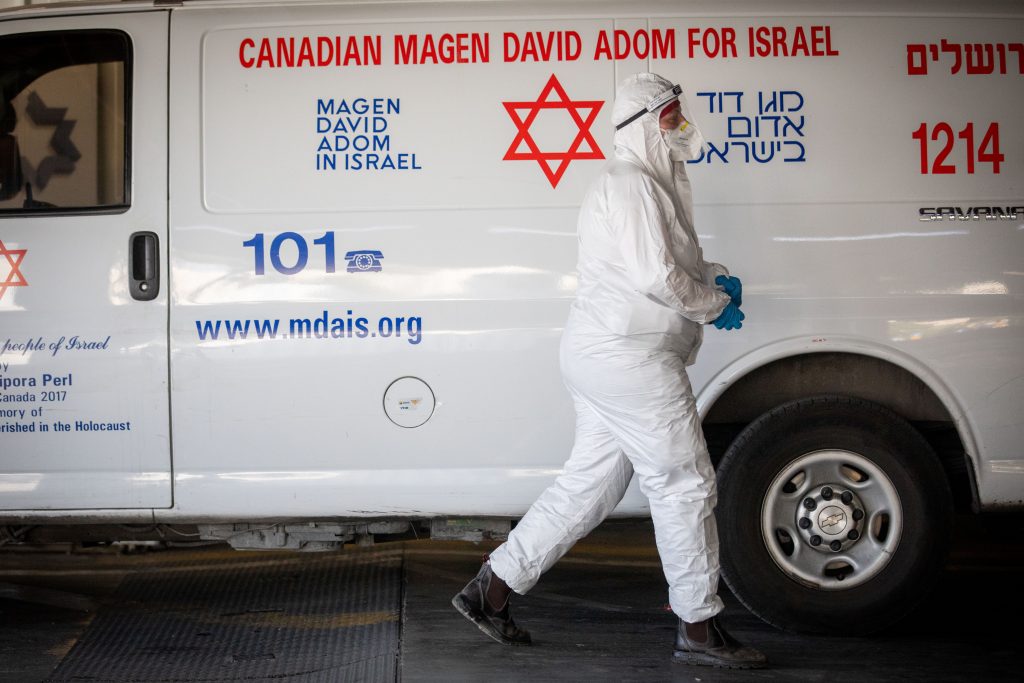 Following an outraged response from chareidi leaders to plans for lockdown of major chareidi cities, the Ministerial Committee for the Designation of Restricted Areas has approved instead a regime of nighttime curfews, according to media reports on Sunday night.

The curfews, to run from 7 p.m. to 5 a.m., will be imposed in about 40 cities with high coronavirus rates. Non-essential businesses will be closed during the curfew. Schools will be closed at all times in those areas. The list of cities affected has not yet been finalized.

During curfew hours, people will be forbidden from venturing more than 1500 feet from their homes. Entering and exiting these cities will be allowed.

The curfews are to last for two weeks, after which the situation will be reassessed.

Prime Minister Binyamin Netanyahu‏‏ reportedly also promised that shuls will be allowed to open during the Chagim, as long as Health Ministry restrictions are followed.

Meanwhile, Netanyahu released a video message addressing the chareidi public in which he denied allegations that the government is being unfair:

“At the moment there are dozens of ‘red’ cities in Israel,” Netanyahu said. “A red city is not designated that way because of harassment or arbitrary decisions. It’s designated according to scientific results. The number of sick, the rate of sickness. Right now, it’s focused mostly in Arab towns and towns of the chareidi community.”

The chareidi community “is very dear to me. You know how much I care about Torah study and prayers. These things are as important to me as they are to you.”

But “we need to take steps that prevent morbidity … We will do what is necessary. We’ll do it responsibly.” He did not specify what measures will be taken.

Earlier in the day, the mayors of Bnei Brak, Elad, Beitar Illit and Emmanuel sent a scathing later to Netanyahu alleging discrimination against the chareidi community and failure to consult with them about proposals, and assailing the lockdowns as not only ineffective but harmful.

The Prime Minister, they asserted, “never sought our opinions, to understand the difficulties and try to push realistic initiatives to flatten the sickness curve.

“You were not attentive to us and you did not bother to ask, understand and learn what characterizes a significant cut of the Israeli population.”

They wrote that Netanyahu had “declared closure after closure on chareidi cities. They never brought true change. … You’ve turned the chareidi public into Israelis’ public punching bag without a moment’s thought to the suffering of tens of thousands.”

According to the mayors, “the chareidi public will not forget the wrong being done to it. We will not forget … the man who time and again signed onto turning us into disease vectors and enemies of the people.”

A meeting set for Sunday to finalize closure plans was canceled amid the furor, pushed off until revisions could be made.

“This government is no longer just detached, it’s dangerous,” said Lapid. “Health professionals, economists, local leaders construct plans for handling the virus, and in comes the government and destroys these based on personal conviction.

”If that’s what you think is right for public welfare and the economy, go ahead and do it. If you’re doing it because you’re afraid of each other, and this results in paralysis and crooked decisions, resign today,” added Lapid.

“The calculation is simple,” said Steinitz. “We have 3,000 people diagnosed with the coronavirus per day. That’s a million patients per year, with at least four million people in isolation and about 10,000 deaths caused by the level of treatment declining due to the system being overwhelmed.

“Therefore, there is no alternative to a full lockdown, along with immediate, drastic measures which are the only way to seriously reduce the infection level.”

Defense Minister Benny Gantz said during a visit to Bnei Brak on Sunday that “we will not conduct ourselves chaotically, but in an orderly fashion.”

He apologized for decisions once again being made at the last minute.