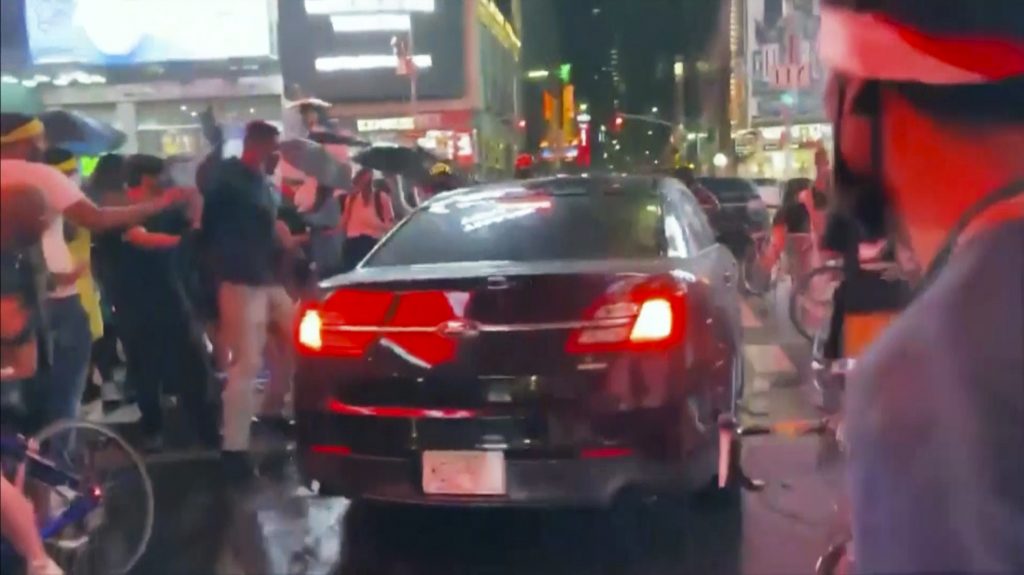 A passenger in a car that drove through a group of Black Lives Matter protesters in New York’s Times Square on Thursday says police have interviewed all six people who were in the car and are continuing to investigate the incident.

Video posted on social media showed people getting into a police-style Ford Taurus and the car jerking through a crowd blocking the street, its horn blaring as demonstrators screamed and scrambled out of the way.

No one appeared to be seriously injured and no charges have been filed. The NYPD tweeted that the car did not belong to the department. Police Commissioner Dermot Shea said the incident happened as protesters and a small group of counterprotesters took to the streets of the touristy Manhattan district.

Juliet Germanotta told The Associated Press on Friday that a pro-police activist who wasn’t part of their group offered to drive them away because, she says, “a mob” was trying to attack them.

“We tried to leave. We stopped because they blocked the street,” Germanotta said. “They then begin to try to open the door and break the windows, so he drove to save our lives. That’s what happened.”

One video of the incident posted on social media showed police officers fanning out to keep protesters away from Germanotta’s group as they got into the car. The video shows the car traveling down the one-way street toward an area where the demonstration is blocking the street.

Another video shows a bicycle blocking the car from moving at one point and one person punching the car’s window and another person banging on it, Shea said.

Germanotta made headlines this summer when she was arrested on several occasions for dumping paint onto a Black Lives Matter mural on the street outside Trump’s namesake Manhattan tower.