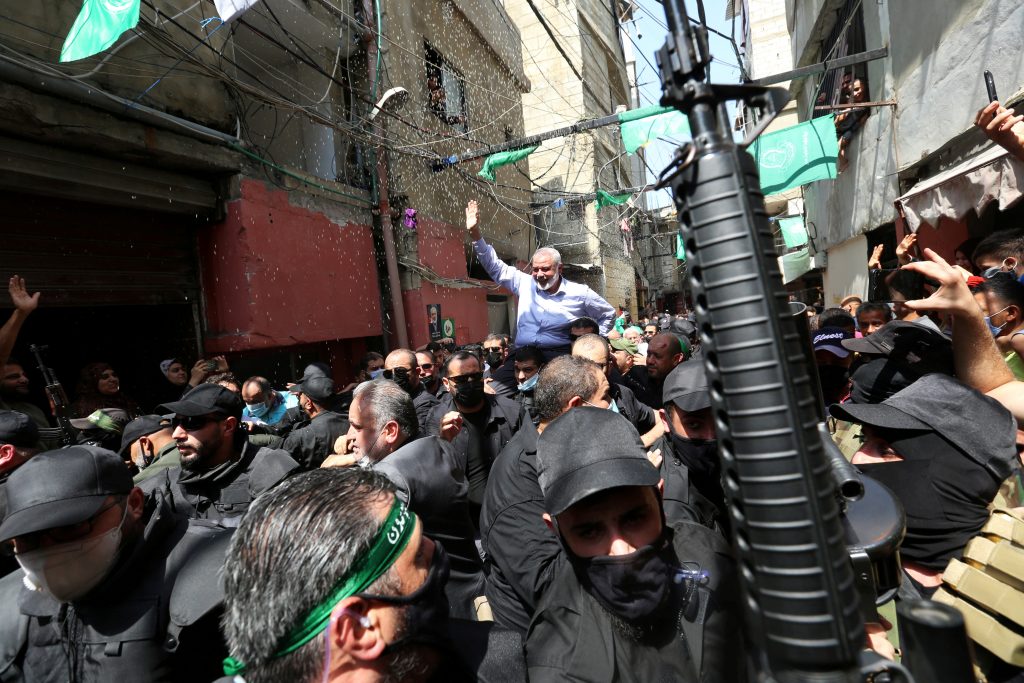 The leader of the Palestinian terror group Hamas on Sunday warned Israel that his organization has missiles capable of striking the city of Tel Aviv, Israel’s commercial and cultural center, and areas beyond it.

Ismail Haniyeh’s comments during a visit to Lebanon followed an escalation in recent weeks in which Hamas-affiliated groups fired rockets into Israel and Israeli warplanes struck areas in the Gaza Strip, which is ruled by Hamas.

Hamas announced last week that international mediators had brokered a new set of “understandings” with Israel, halting the latest round of fighting for the time being in exchange for an easing of Israeli restrictions on the Gaza Strip.

Haniyeh gave a speech in the Palestinian refugee camp of Ein el-Hilweh near the southern port city of Sidon, where he received a hero’s welcome by armed men who carried him on their shoulders.

Haniyeh and a Hamas delegation met earlier with the leader of Hezbollah, Hassan Nasrallah, during which they discussed the situation in the Middle East and the recent normalization of relations between the United Arab Emirates and Israel, a Hezbollah statement said.

“Our missiles had a range of several kilometers (miles) from the border with Gaza,” Haniyeh said. “Today the resistance in Gaza has missiles that can hit Tel Aviv and beyond Tel Aviv.”

Hamas rockets have reached Tel Aviv and beyond in previous rounds of fighting, but such launches are rare and considered a serious escalation by Israel. The seaside metropolis is located some 45 miles north of Gaza.

Haniyeh was criticized during his visit by some in Lebanon on social media. One post sarcastically asked whether it would be better for him to threaten Israel from the West Bank, which is ruled by the Palestinian Authority and with whom Hamas has a longstanding feud. Another post said Lebanon has enough problems at the moment, and doesn’t need Hamas on top of that.

Lebanon is grappling with its worst economic and financial crisis in decades, and the capital Beirut was devastated one month ago by a massive explosion, the result of nearly 3,000 tons of ammonium nitrates igniting at the port. The blast killed more than 190 and injured thousands.