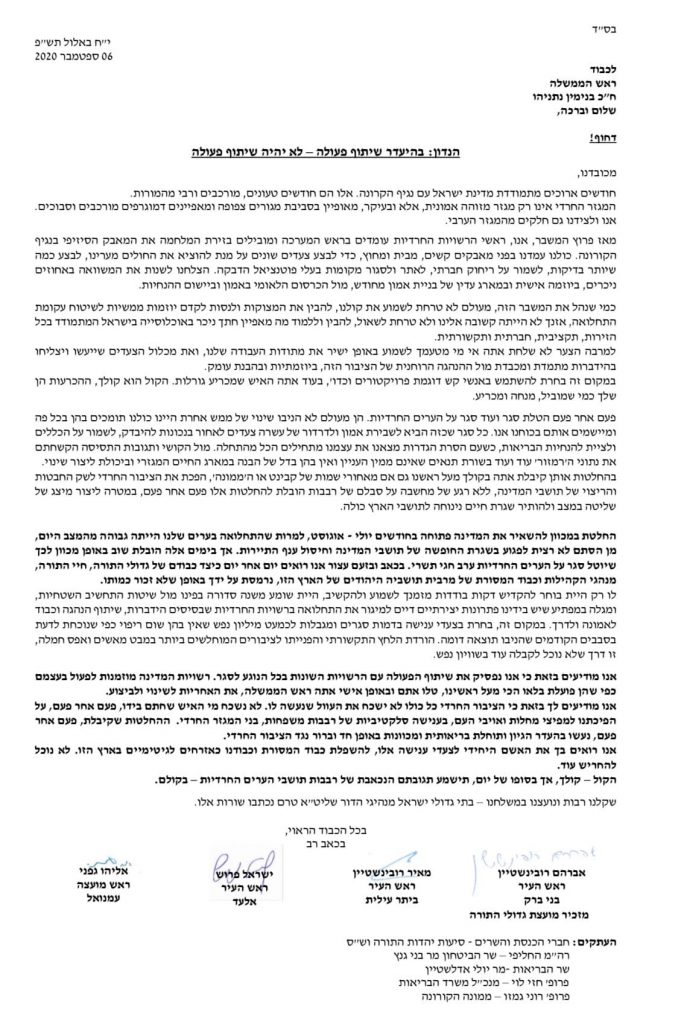 After harsh criticism of the planned lockdowns of several chareidi towns due to high virus infections rates, and a letter sent to Prime Minister Binyamin Netanyahu protesting the closures from mayors of these cities, Netanyahu called a meeting with the chareidi ministers on the Coronavirus Cabinet, Rabbi Aryeh Deri and Rabbi Yaakov Litzman, together with coronavirus commissioner Prof. Ronni Gamzu, during which they discussed cancelling the closures and replacing them with tighter restrictions.

In the meantime, the meeting of the Coronavirus Cabinet to finalize the list of the cities and the restrictions has been called off.

Earlier Sunday, authorities of chareidi cities and communities wrote in a letter addressed to Netanyahu that they will halt all cooperation with the government in the fight against coronavirus.

Netanyahu’s Coronavirus Cabinet had approved Thursday a lockdown of 30 “red towns” with high infection rates, set to take effect on Monday. The majority of the communities on the list have Arab or chareidi populations.

The powerful letter accuses Netanyahu of mismanaging the health crisis in the chareidi sector and creating unwarranted division between the government and the chareidi public.

In their letter, the mayors of Bnei Brak, Elad, Beitar Illit and Emmanuel claim Netanyahu “never sought our opinions, to understand the difficulties and try to push realistic initiatives to flatten the sickness curve.

“You were not attentive to us and you did not bother to ask, understand and learn what characterizes a significant cut of the Israeli population.”

They wrote that Netanyahu had “declared closure after closure on chareidi cities. They never brought true change. … You’ve turned the chareidi public into Israelis’ public punching bag, without a moment’s thought to the suffering of tens of thousands.”

According to the mayors, “the chareidi public will not forget the wrong being done to it. We will not forget who is the man who time and again signed onto turning us into disease vectors and enemies of the people.”

Over the weekend, Gamzu said that “total lockdowns” are only expected to be placed on eight to ten of the country’s “reddest” communities, while night lockdowns and other restrictions may be more appropriate for others.

Gamzu explained last week that residents of the reddest cities would be restricted from traveling more than 500 meters from their homes. In addition, schools – except for special education – would be closed, entry and exit would be limited to only essential workers, and nonessential businesses would be banned from operating.

Since the announcement by the Coronavirus Cabinet to lock down red cities last week, most of which are chareidi or Arab, there has been strong backlash from both sectors against the move.

Bnei Brak Mayor Rabbi Avraham Rubinstein, whose city is on the short list for a lockdown, said there is no dialogue between health authorities and the city, and no reasons have been given for the decision on the closure backed by data. However, he said, it is made clear that they will continue to do everything to maintain the health of the residents as has been done so far.

Elad Mayor Rabbi Yisrael Porush also voiced his opposition to the lockdown. Elad is also deemed to be a “bright red” city.

“The previous closures haven’t proven itself. This is abuse of tens of thousands of chareidi families. The closure only increases the morbidity and doesn’t reduce it. The chareidi public will hold accountable whoever signs the closure order,” Rabbi Rubinstein said.

One of the issues that has been mentioned time and again is that if a yeshivah bachur who lives in Bnei Brak but is learning in a yeshivah out of the town and tests positive, these numbers are added to the city of origin – even though the bachurim are staying in their yeshivah until after Yom Kippur, and therefore can’t infect anyone in their home town.

Chairman of the Constitution and Law Committee, MK Rabbi Yakov Asher, appealed to Prime Minister Binyamin Netanyahu and presented an alternative to closure: restrictions and partial or flexible closures overseen by local authorities. He said this will be “much more effective than a full closure in a few individual cities.”

Gamzu is set to visit Beit Shemesh on Sunday, which is on the list of red zones. The city’s mayor, Aliza Bloch, is expected to voice her opposition to a total closure.

In an interview on Channel 12 on Motzoei Shabbos, Interior Minister Rabbi Aryeh Deri (Shas) came out against the planned lockdowns and said that a nationwide closure is the only way to reduce the number of new coronavirus cases.

“No one has succeeded in bringing down the numbers with another method,” Rabbi Deri said.

The localized lockdowns are part of Prof. Gamzu’s “traffic light” plan to differentiate between areas based upon their per capita infection rates.

“The plan isn’t the cure, it’s a tool for managing the crisis,” Rabbi Deri said, asserting that a general lockdown is the only way to defeat the virus.

He said that a nationwide lockdown will soon come into effect and that ministers will convene Thursday to decide on the matter. He also said that localized ones are more difficult to enforce than a general one, and are therefore meaningless.

Meanwhile, the weekly faction meeting of United Torah Judaism Party will take place Monday in the conference room of the Bnei Brak municipality. The decision to sit in this format is part of the struggle of all the Knesset members, against the government’s decision on disproportionate measures against some of the chareidi authorities, and as a sign of identification with tens of thousands of residents, families, and business owners who will suffer severely from the restrictions.

The meeting will be attended by the heads of the chareidi authorities, on whom the government intends to impose a closure.