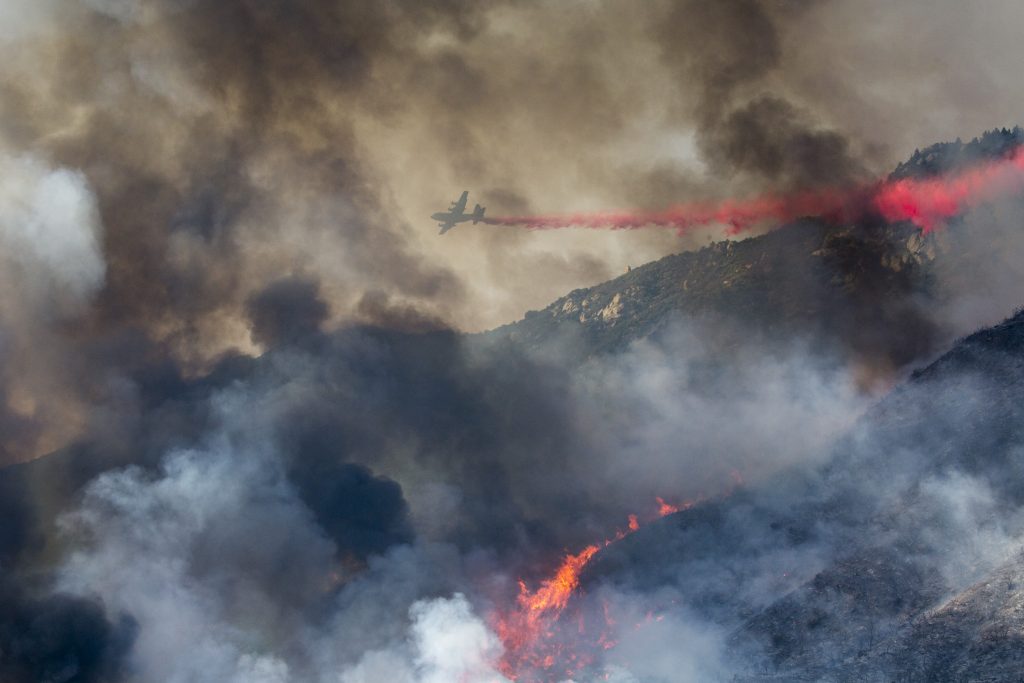 More than 60 people were rescued from a California campground by military helicopter, including two who were severely injured in one of three fast-spreading wildfires that sent people fleeing as a brutal heat wave pushed temperatures into triple digits in many parts of the state.

The fire trapped campers Saturday at a reservoir in the Sierra National Forest. Of the 63 people rescued, two were severely injured, 10 were moderately injured and 51 others had minor or no injuries, according to a tweet by the Fresno Fire Department.

“Aircraft are returning to continue rescue operations,” the agency posted. “Unknown how many more.”

The wildfire burning near Shaver Lake exploded to 56 square miles, jumped a river and compromised the only road into the Mammoth Pool Campground, national forest spokesman Dan Tune said. At least 2,000 structures were threatened in the area about 290 miles north of Los Angeles, where temperatures in the city’s San Fernando Valley reached 117 degrees.

The Madera County Sheriff’s Department said in a tweet earlier Saturday that about 150 people were at the campground’s boat launch, and 10 of them were injured. “All are safe at this time,” the department tweeted.

Officers also were evacuating Beasore Meadows, a large ranch in the Sierra National Forest, on Saturday night, the department tweeted.

Agencies were coordinating an aircraft rescue for crews to safely evacuate them, The Fresno Bee reported.

Tune said the campers were told to shelter in place until fire crews, aided by water-dropping aircraft, could gain access to the site. Tune said he didn’t know how close the fire was burning to the campsite.

“All our resources are working to make that escape route nice and safe for them,” he said.

The lake, 35 miles northeast of Fresno, is surrounded by thick pine forests and is a popular destination for boating and fishing. Bone-dry conditions and the hot weather fueled the flames.

“Once the fire gets going, it creates its own weather, adding wind to increase the spread,” Tune said.

The fire broke out Friday evening. Crews worked through the night, but by Saturday morning authorities issued evacuation orders for lakeside communities and urged people seeking relief from the Labor Day weekend heat to stay away from the popular lake.

“Adjust your Labor Day weekend plans. Access to Shaver Lake is completely closed to the public due to the Creek Fire,” the Fresno County sheriff’s office tweeted after announcing evacuation orders for campsites and communities by the lake.

The California Highway Patrol shut State Route 168 to allow access only for emergency responders and evacuees.

In Southern California a fire in the foothills of Yucaipa, east of Los Angeles, prompted evacuation orders for eastern portions of the city of 54,000 along with several communities, including Oak Glen, Mountain Home Village and Forest Falls. The California Department of Forestry and Fire Protection, also known as Cal Fire, said the fire scorched at least 1.5 square miles and was burning at a “moderate to dangerous” rate of spread.

A portion of the San Gorgonio Wilderness was closed, and hikers were urged to leave.

In eastern San Diego County, fire officials warned a fire near Alpine was burning at a “dangerous rate of speed” after spreading to 400 acres within an hour. A small community south of Alpine in the Cleveland National Forest was ordered to evacuate.

California has seen 900 wildfires since Aug. 15, many of them started by an intense series of thousands of lightning strikes. The blazes have burned more than 1.5 million acres. There have been eight fire deaths and nearly 3,300 structures destroyed.

The heat wave was expected to spread triple-digit temperatures over much of California through Monday. Officials urged people to conserve electricity to ease the strain on the state’s power grid.

Pacific Gas & Electric, the state’s largest utility, warned customers Saturday that it might cut power starting Tuesday because of expected high winds and heat that could create even greater fire danger. Some of the state’s largest and deadliest fires in recent years have been sparked by downed power lines and other utility equipment.