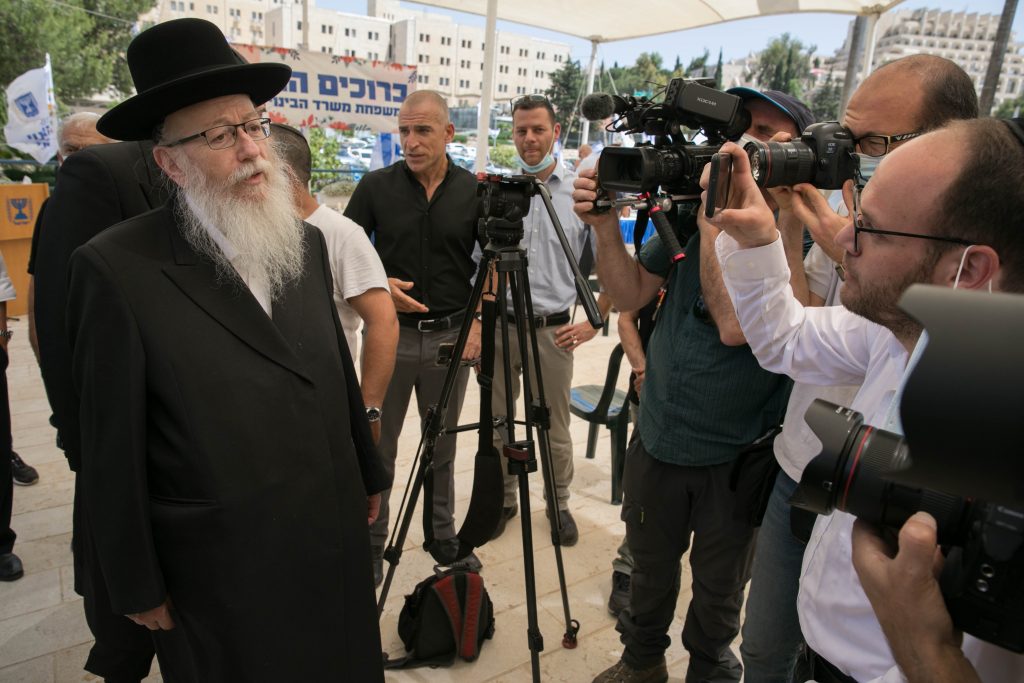 “The decision to impose a lockdown at this stage is part of an arranged plan of some elements to bring a lockdown during the Chagim and close shuls on Rosh Hashanah, Yom Kippur and Sukkos, which we won’t allow in any way,” Rabbi Litzman said, according to media reports.

Coronavirus project manager Prof. Ronni Gamzu conceded on Thursday that there is a good chance of a lockdown during the Chagim: “It is possible that in a week we will reach 60 red cities, with an exponential increase in the number of those infected, and then we will be required to take steps such as a general closure.”

The comments followed a vote of ministers to impose lockdowns on some 30 cities and towns, mostly Arab, but also including the chareidi cities of Elad, Rechasim, Bnei Brak, Beit Shemesh and Beitar Illit.

In another sign of deteriorating relations between Gamzu and the chareidi community, two Bnei Brak city council members resigned on Thursday to protest what they termed as “non-transparent” conduct by Gamzu and his staff, Ynet reported.

Council members Arik Adler and Avraham Yustman said in their resignation letter that the municipal committee, which ostensibly advises Gamzu, had no real say in policymaking.

“We have repeatedly warned that if there will be no transparency, we will not gain the public’s trust, but as stated, the powers that be chose to go down a path that includes irresponsible statements and reckless actions that were not made as a joint decision,” the letter read.

They charged that the infection in Bnei Brak was inflated by inclusion of about 100 cases of yeshivah students outside the city who were counted because they are registered as residents of Bnei Brak.

Gamzu defended his recommendations, saying: “We are seeing a high increase in the amount of morbidity and of new patients in the chareidi sector. After they managed to reduce the level of morbidity, it has risen alarmingly again. Within the communities of the sector, there is great difficulty in trying to cope with it.

the sector there is great difficulty in trying to cope with it.

“I visit the Arab communities a lot and see indifference, contempt and apathy. They do not understand that a wedding is a contagion event that has consequences for the family and those around them,” Gamzu added.

“In the red cities with high morbidity we will introduce a nightly curfew and close the educational system. It is not an easy step, not for the cities, not for the residents, and not for me. But when we see a very large outbreak and loss of control over the morbidity levels then we have no choice,” Gamzu was quoted by Ynet as saying.

“No weddings, no large events, no disregard for the rules in any restaurant, anyone who does not put on a mask and does not keep the ‘green’ instructions is spitting in the face of the medical personnel. There will be more difficult decisions. We’ll have to see what happens in the next few days. This is a message to all the people of Israel,” he declared.

Channel 12 reported that approximately 5,000 people attended a wedding on Wednesday night in the northern Arab town of Shfaram.

But illegal weddings have been held by other groups as well. Haaretz reported earlier this week that hundreds attended the illicit wedding of the son of Israel’s Ambassador to China Zvi Hefetz.