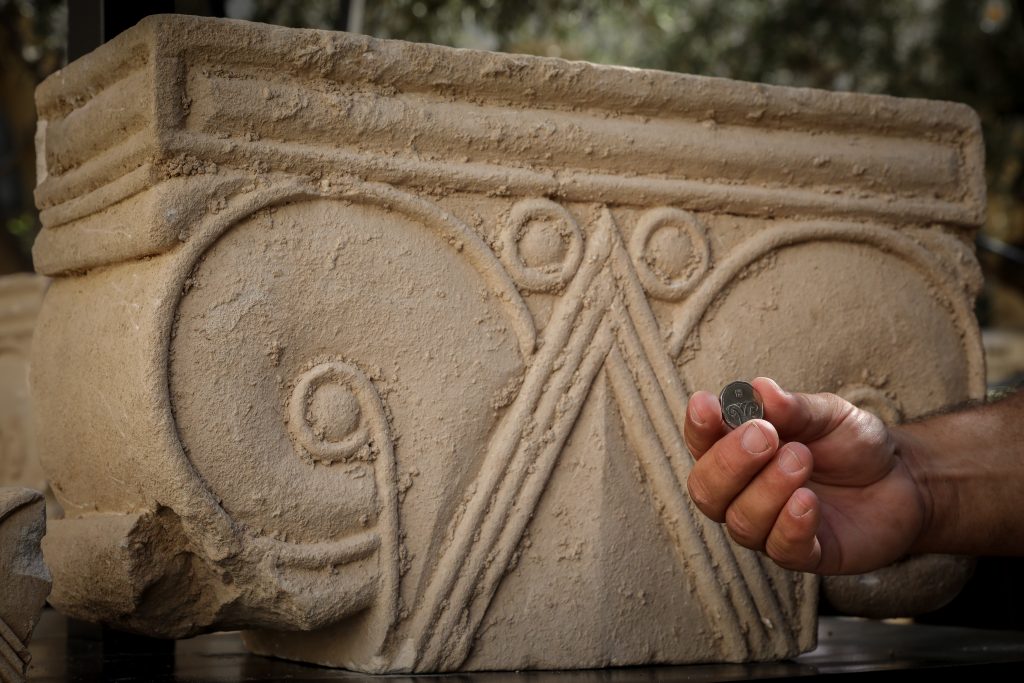 Archaeologists have uncovered majestic column heads from a First Beis Mikdash-era palace at Yerushalayim’s Armon Hanatziv promenade, with the remnants of the ancient building going on public display for the first time on Thursday.

The owner of the palace remains a mystery, but archaeologists were able to date the finds back to the era of the Judean kings, due to the proto-Aeolic features of the soft limestone architecture.

The column head design will appear strikingly familiar to Israelis — it adorns the five-shekel coin in tribute to the First Beis Mikdash era.

“This is a very exciting discovery,” said Yaakov Billig, of the Israel Antiquities Authority. “This is a first-time discovery of scaled-down models of the giant proto-Aeolian capitals, of the kind found thus far in the Kingdoms of Yehudah and Yisrael, where they were incorporated above the royal palace gates. The level of workmanship on these capitals is the best seen to date, and the degree of preservation of the items is rare.”

Experts believe the residence was built between the reigns of Kings Chezekiyah and Yoshiah, after the Assyrian siege on the city was lifted. Residents of Yerushalayim then ventured outside the walled City of David and expanded the city, said Billig.

“This find, alongside the palace that was found in the past at Ramat Rachel and the administrative center found on the slopes of Arnona, attest to a revival of the city and leaving the walled areas of the First Beis Mikdash era after the Assyrian siege,” which ended in 701 BCE, he said.

“We find villas, mansions and government buildings in the unwalled areas outside the city and this attests to the relief felt by the residents of the city after the siege was lifted.”

The three columns and other remnants of the building are on display at the City of David archaeological center.