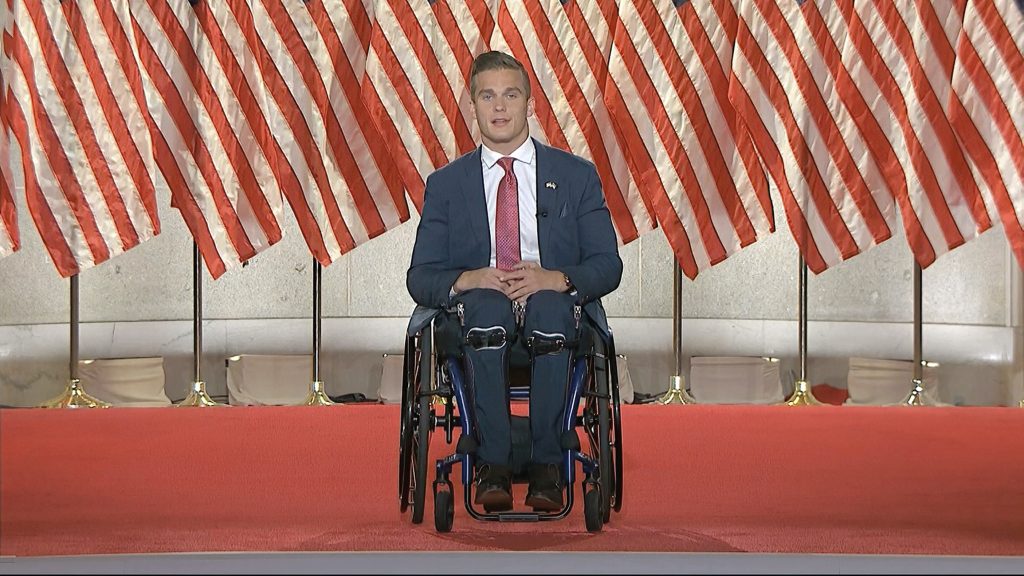 If as widely expected, GOP candidate Madison Cawthorn wins the North Carolina congressional seat vacated by White House Chief of Staff Mark Meadows, he will be the youngest person to be elected to the U.S. Congress in modern history.

Yet it wasn’t Cawthorn’s age — he turned 25 earlier this month — that made headlines after he delivered a stirring address last Wednesday night at the Republican National Convention, but his moving personal story.

“At 18, I was in a horrific car accident that left me paralyzed from the waist down,” Cawthorn related. “Instantly, my hopes and dreams were seemingly destroyed. I was given a 1% chance of surviving.”

He told of his first public outing in a wheelchair to a sports event.

“Before my accident, I was 6’ 3”. I stood out in a crowd. But as I was wheeled through the stadium, I felt invisible. … At 20, I thought about giving up. However, I knew I could still make a difference.

“My accident gave me new eyes to see, and new ears to hear,” Cawthorn added. “I say to people who feel forgotten, ignored, and invisible: ‘I see you. I hear you.’”

Perhaps the most important message that needs to be said in today’s highly charged, polarized political climate is the importance of remembering all those who feel forgotten, ignored, and invisible.

Perhaps the most notable of the relatively ignored and invisible are people the United States owes the most to — its 18.2 million veterans. These are the brave warriors of World War II, the Korean and Vietnam Wars, the heroes who fought in Grenada, Panama, Lebanon, the Persian Gulf War, Afghanistan and Iraq.

They literally put their lives on the line when they left their homes, families and friends for long stretches of time, to fight America’s battles on foreign lands.

Some of them were physically injured in the heat of battle or by terrorist attacks, and returned maimed or even handicapped. Other suffered post-traumatic stress disorder and other emotional illnesses. Years after they left the service, tens of thousands of veterans are homeless, still unable to put their lives together again.

In recent months, an untold number of veterans, especially among the elder members of this elite club, succumbed to the coronavirus, leaving behind mourning families and bereaved fellow servicemen.

Much to his credit, President Trump has made the plight of U.S. veterans one of his administration’s highest priorities. His strong support of the bipartisan VA Mission Act, which the President signed into law in June of 2018, consolidated seven VA community care programs into one streamlined program and did much to improve the medical care given to veterans. These actions were highlighted at the Republican National Convention.

There is much more that needs to be done to help ensure that no veteran feels forgotten or unappreciated. From medical care to housing, from job placement to assisted living options for seniors, there is still lots of room for improvement. As a nation, America must do all it possibly can to try to pay back at least part of the moral debt it owes these heroes.