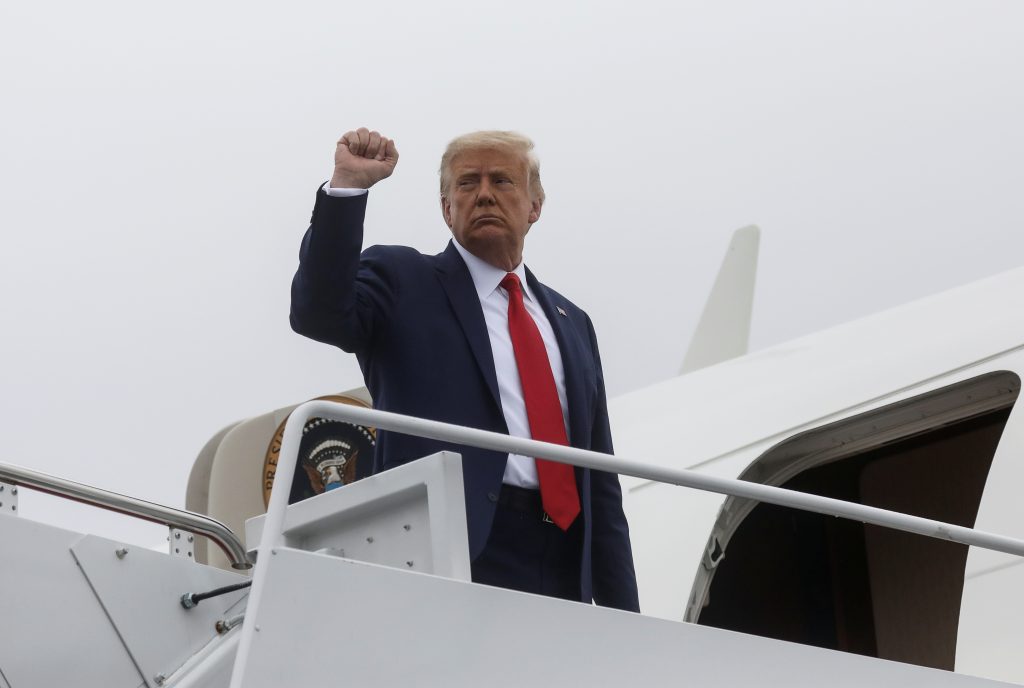 President Donald Trump arrived in Kenosha, Wisconsin, on Tuesday to highlight his “law and order” re-election campaign theme in a city upended by protests after the shooting of a Black man by a white police officer.

Trump’s trip to Wisconsin, a political battleground state that he won narrowly in 2016, gives him a chance to emphasize his police-friendly pitch in a state he hopes to keep in his column in the Nov. 3 election.

After landing at an airport in neighboring Illinois, Trump and his motorcade passed groups of onlookers, mixed with people carrying signs of support for him and others carrying signs with “Black Lives Matter” written in big letters.

A 17-year-old Trump supporter has been charged with killing two people and wounding another with a semi-automatic rifle in Kenosha. Trump defended the white teenager, who faces six criminal counts, and declined to condemn violence from his supporters.

But in Portland, Oregon, site of three months of nightly protests that have often turned violent, a Trump supporter was shot dead on Saturday and the president lamented that “they executed a man in the street.”

“One of the reasons I’m making the trip today and going to Wisconsin is we’ve had such a big success and shutting down what would be right now a city – that would have been Kenosha – a city that would have been burned to the ground by now,” Trump said before departing Washington.

Kellyanne Conway, a Trump adviser until Monday, said last week the president stood to benefit politically from the kind of unrest that erupted in Kenosha.

Trump’s “law and order” message appeals to his base of white supporters.

At last week’s Republican National Convention Trump portrayed Biden as a leader whose policies would create further chaos in the streets, trying to link Biden to vandals and left-leaning, violent activists.

Biden has responded by calling for rioters and looters to be prosecuted while saying Trump himself was stoking the violence with divisive rhetoric, calling the president “too weak, too scared of the hatred he has stirred to put an end to it.”

Trump did attempt to arrange a meeting with the family of Jacob Blake, the Black man partly paralyzed after a police officer shot him in the back, by going through the pastor of Blake’s mother, according to Blake family lawyers.

Trump said in the end he would not meet with Blake’s relatives because of a request that lawyers be involved.

Trump’s trip has increased expectations that Biden would also visit Kenosha. Biden’s campaign has said he will soon go to Wisconsin, where he has a lead in the polls, but has not disclosed details.