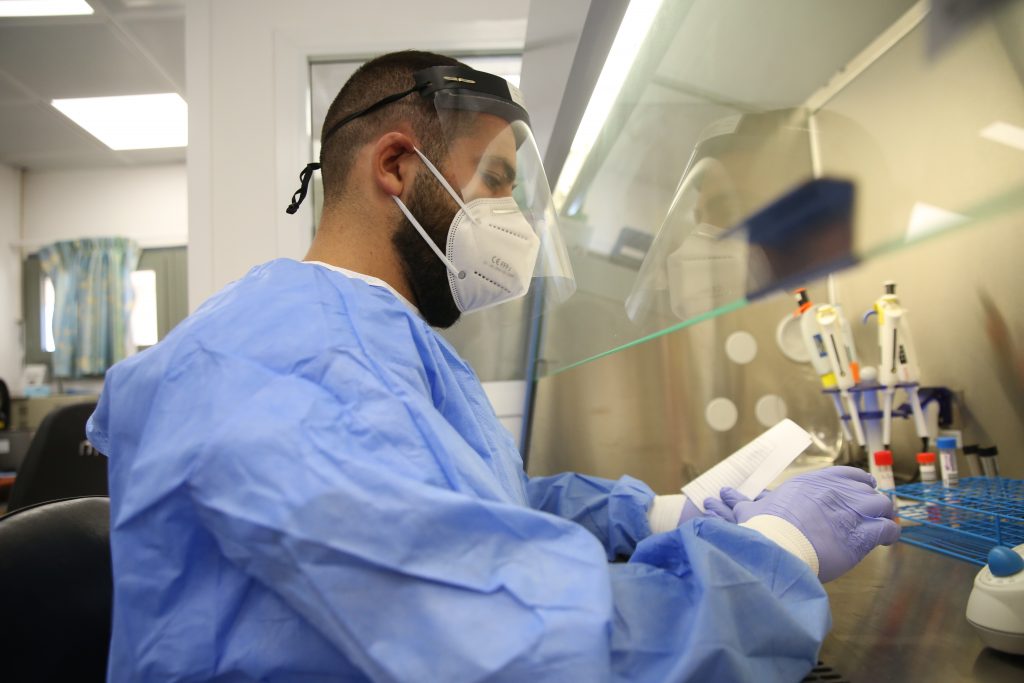 While Israeli officialdom has been reveling in the historic accord with the UAE, striking lab workers have been seething over governmental indifference to their grievances.

Approximately 2,000 lab workers from public hospitals and Clalit Health Services went on strike Sunday morning after negotiations with the Finance Ministry broke down

In an effort to capture Prime Minister Binyamin Netanyahu‏‏’s attention, they organized a demonstration outside his Yerushalayim residence on Tuesday evening.

“I apologize to the general public for this difficult and terrible strike and to my colleagues in the health care system. Unfortunately, we have no choice. I no longer have words to describe how detached Prime Minister Benjamin Netanyahu and his ministers, Israel Katz and others, are from the people,” said Esther Admon, chair of the Association of Biochemists, Microbiologists and Laboratory Workers.

“I am aware that the system is crashing. This is the third day of our strike, it has been an unprecedented event… The indifference and disregard of the prime minister and his ministers is outrageous. Beyond words. I understand with sorrow that there is no leadership in Israel.”
The workers group released a statement denouncing the government’s decision to lavish funding on private labs while neglecting the public ones.

“If the government had invested even only 10% of the NIS 4 billion allocated to the private laboratories, there would have been no reason to strike… We decided to go demonstrate at Balfour because we have no choice.”

The strike has not noticeably disrupted coronavirus testing. Test are being conducted, but the technicians are only reporting on those that are positive. Testing in emergency and trauma wards, where the tests can be life-saving, has gone unaffected.

Moshe Levy, a technician at Soroka Hospital in Beersheva attacked the hypocrisy of officials in an online posting:

The Finance Ministry is “disconnected, sending unrealistic responses to the media that we have been offered proper proposals, and it is a pity that we did not respond positively,” Admon said. “If we do not go to war, we will continue to risk human lives every day,” she added.

The Finance Ministry on Sunday said in a statement: “Generous offers were made but rejected. We regret that despite the agreement signed with the lab workers and the significant raises we gave them for processing coronavirus tests, the association is choosing to take advantage of the situation and go on strike at a time that is very sensitive, both in terms of economics and in terms of public health. We are willing to go back to the negotiating table at any time and call on the Association of Biochemists, Microbiologists and Laboratory Workers to join the fight.”