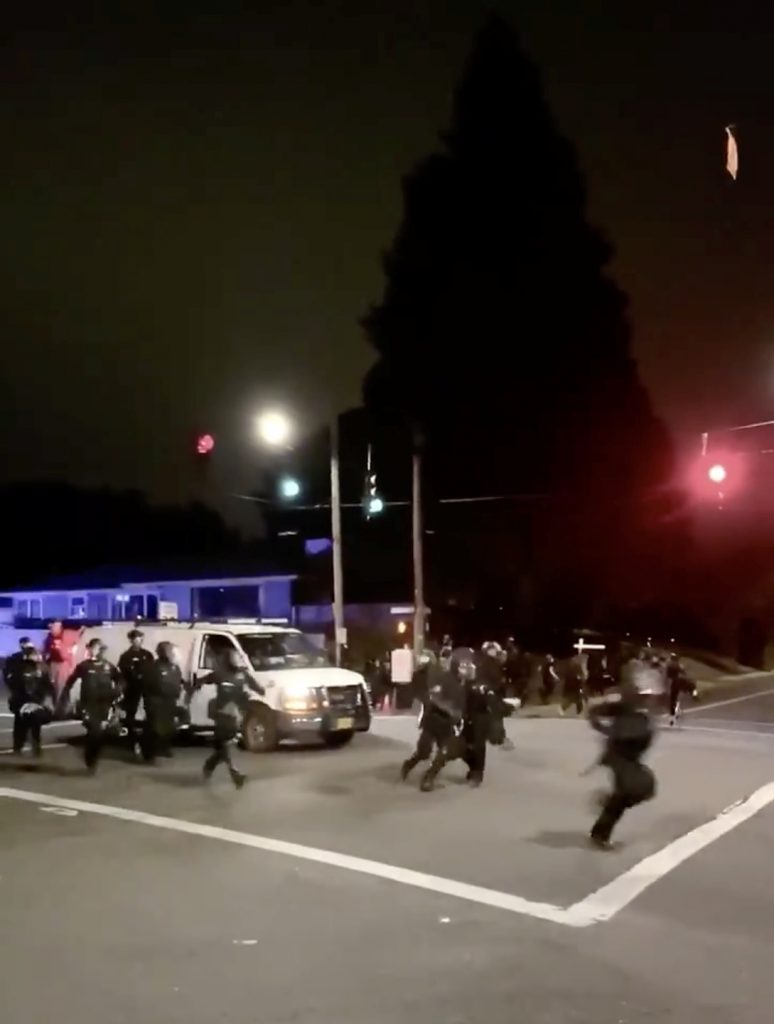 State police and law enforcement from neighboring suburbs were sent to Portland, Oregon, on Monday as tensions mounted following a fatal weekend shooting in the midst of clashes between supporters of President Donald Trump and counterprotesters.

Portland Mayor Ted Wheeler on Sunday warned of an escalation of violence after seeing a flurry of social media posts vowing revenge for Saturday’s shooting victim, identified by the right-wing Patriot Prayer militia group as one of its supporters.

Governor Kate Brown, a Democrat, announced a plan on Sunday that she said would allow for peaceful protest while cracking down on lawlessness that has often accompanied demonstrations since the May 25 killing of George Floyd, the Black man who died under the knee of a white police officer in Minneapolis.

“Every Oregonian has the right to freely express their views without fear of deadly violence. I will not allow Patriot Prayer and armed white supremacists to bring more bloodshed to our streets,” Brown said in a statement.

In addition to temporarily sending in state police troopers and officers from neighboring jurisdictions, the FBI and federal prosecutors will add resources to prosecute criminal offenses stemming from protests, Brown said.

Portland‘s demonstrators, demanding reforms of police practices they view as racist and abusive, have frequently clashed with law enforcement and on occasion with counterprotesters associated with right-wing militia groups.

Hundreds of demonstrators have been arrested, including 29 accused of taking part in an unlawful assembly on Sunday night. Two of them were found with loaded handguns, while others were carrying knives and rocks, police said.

The Trump administration in July deployed federal forces to Portland to protect a U.S. courthouse that has been the focus of violent protests and other federal property, drawing criticism that their presence only heightened the unrest. The federal agents were later withdrawn.

Tensions flared on Saturday night between a large caravan of demonstrators driving through the city in pickup trucks waving pro-Trump flags, and opposing protesters in the streets.

Video on social media showed individuals in the trucks firing paint-balls and chemical irritants at opposing demonstrators as they rode by, while those on the street hurled objects at the trucks and tried to block them.

Investigators have yet to say whether the fatal shooting grew out of those confrontations. Police identified the victim on Monday as Aaron J. Danielson, 39, of Portland, who died from a gunshot wound to the chest.

“It doesn’t matter what you believe in politically … if you knew him as a person, you would never hurt him,” Gibson said.

Democrats have countered that Trump is stoking violence and racial strife with divisive rhetoric that has emboldened right-wing activists.

“This president long ago forfeited any moral leadership in this country,” Democratic presidential nominee Joe Biden said during a visit to Pittsburgh. “He can’t stop the violence – because for years he has fomented it.”