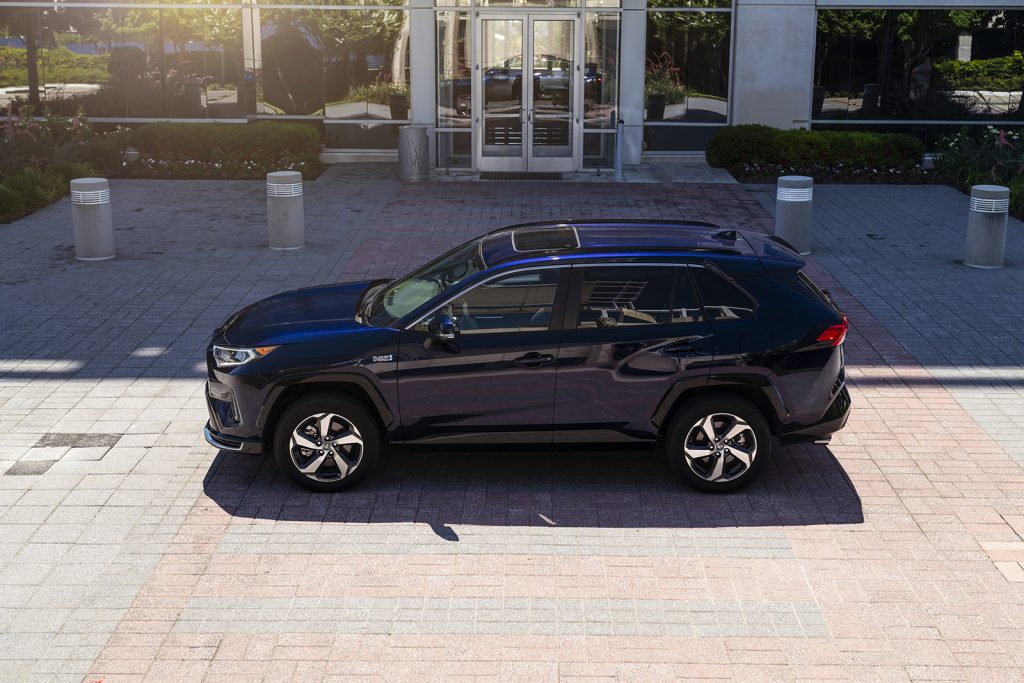 Toyota dips a cautious toe into the electric-vehicle pool — again — with the capable 2021 RAV4 Prime plug-in hybrid that just went on sale. Jump in. The electrons are fine.

As brands like Audi, Cadillac, GMC, Ford and Volkswagen dive into the market for 100% electric vehicles, Toyota instead continues to refine and improve the hybrid technology that powered its massive sales surge in the early 2000s. The other giants see hybrids largely as a rest stop on the highway toward a future of 100% electric vehicles — a nice place to stretch your legs, with hybrids now receding in the rearview. Toyota is enjoying a picnic there, confident it’ll catch up later.

For those of you who don’t follow EV technology like it’s a sport, the world’s automakers have largely split into two camps as they work to reduce petroleum consumption and greenhouse gases.

Some, led by Toyota, continue to invest heavily developing new hybrids, vehicles that have both a gasoline engine and electric motors and batteries. Plug-in hybrids, like the RAV4 Prime, get a bigger battery you can charge from an outlet to drive farther on electricity before you start burning gasoline. (Toyota has one vehicle powered by a hydrogen fuel cell, but it’s an asterisk in a conversation about currently available technologies.) Other automakers have moved on to electric vehicles powered solely by batteries. Battery electric vehicles — BEVs to auto execs who can turn anything into an acronym — don’t have a gasoline engine. They run purely on electricity, from a charging station or regular household current, though the latter takes 12 hours for a full charge.

Plug-in hybrids — PHEVS, don’t ya know? — like the RAV4 Prime are a midpoint between conventional hybrids and EVs. Their batteries are big enough to go farther on electricity alone — 42 miles in the RAV4 Prime, a distance that covers many people’s daily need. The gasoline engine kicks in for longer trips, or when charging from the regular power grid isn’t available.

Toyota is developing BEVs, but conservatively, as is its wont.

The RAV4 Prime is one of Toyota’s quickest vehicles. Its 5.7-second 0-60 mph time is tops among Toyota’s four-door models. That’s thanks to 302 total horsepower from its gasoline engine and electric motors. That’s 99 hp more than the gasoline-only RAV4. The Prime also has more torque than the gasoline model, though Toyota doesn’t provide a specific figure on the grounds that it’s hard to figure out because of the complex interaction between gasoline engine and electric motors.

The RAV4 is Toyota’s best-selling vehicle in the U.S. by a wide margin, and the country’s top selling nonpickup, so the Prime is kind of a big deal. Acceleration is strong, either in battery-only EV mode or using hybrid power when the engine and motors work together seamlessly.

The steering is responsive and the brakes feel natural and are easy to modulate as they perform the complex ballet of combining conventional brakes and the electricity producing regenerative braking that keeps the battery able to boost power and fuel economy after the all-electric range is exhausted.

The batteries and motors add about 810 pounds to the weight of a well-equipped model like the XSE Premium I tested. Luggage space behind the rear seat decreases about 4 cubic feet to make room for the batteries, but remains useful at 33.4 cubic feet with the large sun roof.

In addition to its 42-mile EV range, the RAV4 Prime gets an EPA rating of 54 mpg in combined city/highway driving using the gasoline engine. A complicated measure that aims to compare carbon emissions in all-EV mode to a traditional internal combustion engine checks in at a pretty good 133 MPGe.

The RAV4 Prime is comfortable and roomy, despite sacrificing a few cubic feet of cargo space to add batteries. Head and leg room are good.

The interior of my top-of-the-line test car was trimmed in soft black materials with red accent stitching. The controls were easy to use – traditional buttons and dials and a 9-inch touchscreen.

Electric vehicles are required to emit a sound to alert pedestrians to their presence. Automakers are experimenting with different tones.

Toyota settled on a whale-song-in-distress note for the RAV4 Prime.

Maybe it’ll grow on you.

Prices for the RAV4 Prime start at $38,100 for an SE model. All Primes come with a 2.5L engine and a hybrid system that uses an electric rear axle to deliver all-wheel drive. A continuously variable transmission is standard.

There’s not a lot of competition for compact plug-in hybrid, or PHEV, SUVs. The Ford Escape plug-in going on sale shortly is probably the most direct. Prices aren’t available yet, but the EPA rated the Escape plug-in at 38 miles of battery range, 42 mpg city/highway on gasoline power and 100 MPGe.

Features on My Test Vehicle

— Memory for driver settings Smart key system on all doors