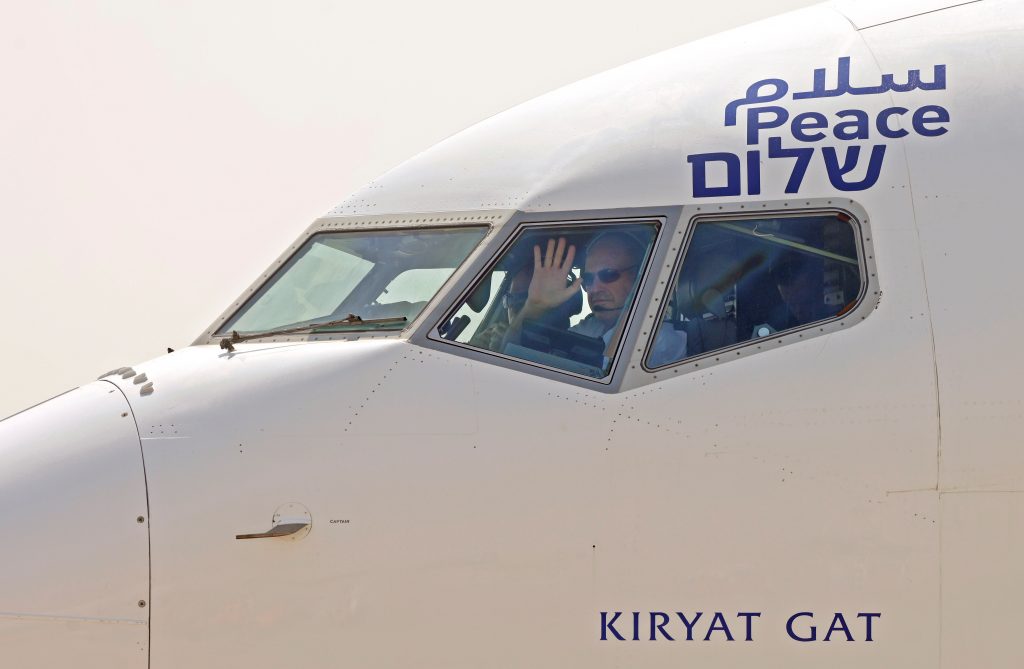 The United Arab Emirates’ decision to normalize relations with Israel follows a history of peace efforts between Israel, the Palestinians and their Arab allies that have failed to overcome decades of distrust and violence.

Most Arab nations, including the UAE, have not recognized Israel or had formal diplomatic or economic relations with it because of what they regard as Israel‘s thwarting of Palestinians’ aspirations for a state of their own.

Details of the Israel-UAE normalization deal are to be discussed in meetings on Monday in Abu Dhabi between UAE officials and U.S. and Israeli delegates.

Here are the main Middle East peace initiatives undertaken since the 1967 Six Day War, when Israel liberated Yehudah, Shomron and East Yerushalayim, the Sinai Peninsula, the Gaza Strip and the Golan Heights:

1967 – U.N. Security Council Resolution 242: After the Six-Day War, U.N. Security Council Resolution 242 calls for the “withdrawal of Israeli armed forces from territories occupied in the recent conflict” in return for all states in the area to respect one another’s sovereignty, territorial integrity and independence. The resolution is the foundation for many peace initiatives, but its imprecise phrasing – is the reference to all territories or just some? – has complicated efforts for decades.

1978 – Camp David agreement: Israel‘s Menachem Begin and Egypt’s Anwar Sadat agree on a framework for regional peace that calls for an Israeli withdrawal in stages from Egypt’s Sinai and a transitional Palestinian government in Yehudah, Shomron and Gaza.

1979 – Israeli-Egyptian peace treaty: The first peace treaty between Israel and an Arab country sets out plans for a complete Israeli withdrawal from Sinai within three years. In 1981, Sadat was assassinated by Islamist revolutionaries opposed to the deal.

1991 – Madrid summit: Representatives of Israel and the Palestine Liberation Organization (PLO) attend a peace conference. No agreements are reached but the scene is set for direct contacts. 1994 – Israel-Jordan agreement Jordan becomes the second Arab country to sign a peace treaty with Israel. But the treaty is unpopular and pro-Palestinian sentiment is widespread in Jordan.

1993-1995 – Declaration of Principles/Oslo Accords: Israel and the PLO hold secret talks in Norway that result in interim peace accords calling for the establishment of a Palestinian interim self-government and an elected council in Yehudah, Shomron and Gaza for a five-year transitional period, Israeli troop withdrawals and negotiations on a permanent settlement.

2002-2003 – Bush Declaration/Arab peace initiative/Road Map: George W. Bush becomes the first U.S. president to call for the creation of a Palestinian state, living side by side with Israel “in peace and security.”

2002 – Saudi Arabia presents Arab League-endorsed peace plan for full Israeli withdrawal from “occupied territory” and Israel‘s acceptance of a Palestinian state in return for normal relations with Arab countries. The United States, the European Union, the United Nations and Russia present their own road map to a permanent two-state solution to the conflict.

2007 – Annapolis summit: Palestinian leader Mahmoud Abbas and Israeli Prime Minister Ehud Olmert fail to reach a deal at a U.S.-hosted summit. Olmert says later they were close to a deal but a graft investigation against him and a Gaza war in 2008 scupper any agreement.

2009 – Netanyahu’s Bar-Ilan address: Prime Minister Benjamin Netanyahu says he would be prepared for a peace deal that includes the establishment of a demilitarized Palestinian state. He also sets another condition: Palestinian recognition of Israel as the “state of the Jewish people.”

2019 – Netanyahu says he intends to annex Jewish communities in Yehudah, Shomron, and much of the Jordan Valley if elected. U.S. Secretary of State Mike Pompeo effectively backs Israel‘s claimed right to build Jewish communities in Yehudah and Shomron by abandoning a four-decade-old U.S. position that they were inconsistent with international law. Most countries still regard them as illegal.

January 2020 – Trump unveils his full Mideast plan in Washington, alongside Netanyahu. It offered U.S. recognition for Israel‘s sovereignty over its West Bank settlements and required Palestinians to meet difficult conditions for a state. Palestinians reject it as de facto annexation, saying it would leave them a fragmented “Swiss-cheese” state. Israel‘s far-right settlers also reject the plan, opposing any form of Palestinian state.

Aug. 13, 2020 – Trump announces surprise deal to normalize relations between Israel and the UAE, saying he hoped other Gulf countries would follow. UAE officials say the deal puts an end to annexation of Yehudah and Shomron. But Netanyahu says it only meant Israel had agreed to “temporarily wait.”