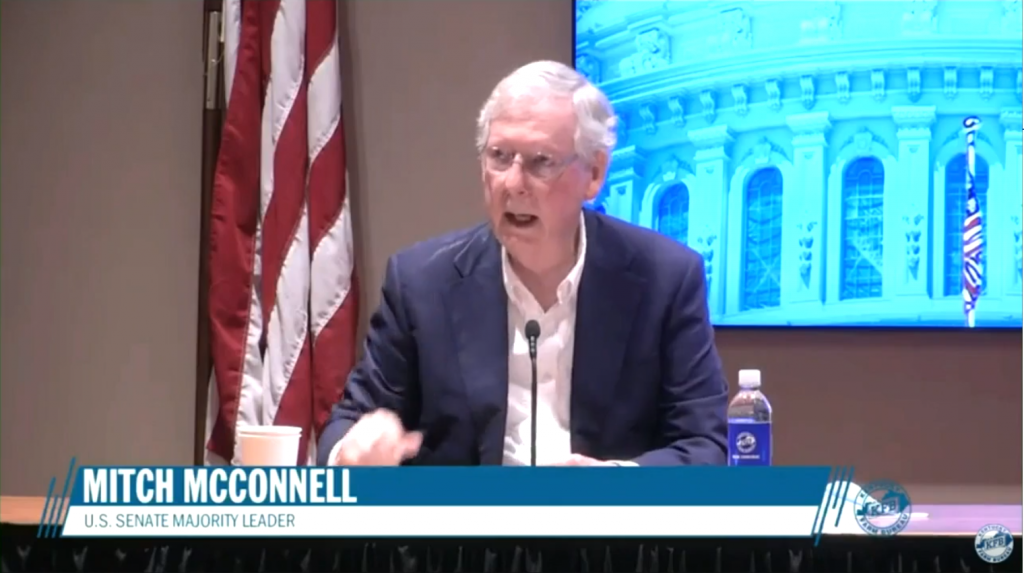 Senate Majority Leader Mitch McConnell made an enthusiastic pitch Monday for Republican candidates on the ballot nationally, pointing to the pre-coronavirus economy and the appointment of conservative judges while saying Joe Biden would not be able to resist Democrats’ leftward shift.

Appearing at a forum hosted by Kentucky Farm Bureau, McConnell said he looks out for middle America as the only one of the top four congressional leaders not from California or New York.

The Kentucky Republican, seeking a seventh term in the November election, was able to monopolize the time since his Democratic challenger, Amy McGrath, skipped the event. The two rivals have yet to have a socially distanced face-off, and their campaigns are at odds over a debate schedule.

During the Farm Bureau forum, McConnell defended the records of President Donald Trump and the GOP-led Senate as Republicans struggle to hold onto the White House and Senate.

“I think we’ve made an important difference for the country,” McConnell said. “In February, we had the best economy in 50 years. Two months later we looked like the Great Depression after the coronavirus. But the things we were doing were working.”

McConnell pointed to Republican successes in cutting regulations and passing a tax overhaul that he said helped farm country by significantly increasing exemptions from the inheritance tax.

The Senate leader also stressed his role in helping reshape much of the federal judiciary. He blocked the Senate from considering President Barack Obama’s nomination of Merrick Garland to the Supreme Court, clearing the way for Trump to appoint conservative jurist Neil Gorsuch. In June, the Senate confirmed the 200th federal judge named by Trump — the highest number of judicial nominees confirmed at this stage of a presidency in four decades.

“That’s probably the most lasting impact this administration, coupled with this Senate, has had that will last into the future,” McConnell said.

McConnell said the appointees share a similar characteristic — a belief that “the job of a judge is to actually follow the law and not act like a legislator.”

McConnell has largely avoided talking politics during a series of August recess stops across Kentucky, but he tore into his political opponents during the Farm Bureau event. The Democratic Party, he said, has become “much more radical … than you have ever seen.”

As for Biden, McConnell said he likes the Democratic presidential nominee and long-time Senate colleague personally and did some deals with him during the Obama years, including an agreement that kept the country from falling off a fiscal cliff.

But McConnell said the former vice president is “not going to resist the whole thrust of the national Democratic Party.”

McConnell also ripped into McGrath for skipping the Farm Bureau event, where the topics included trade and farm labor policies.

“I think the fact that my opponent is not here indicates the utter contempt the Democrats have for rural America these days,” McConnell said.

Sticking to one of his campaign themes, McConnell said Kentucky benefits from his role in setting the Senate’s agenda. McGrath would be “dead last” in seniority if she joined the Senate, he said.

“If she were to succeed in defeating me, her first vote in the Senate would be to make Chuck Schumer from New York the majority leader of the Senate, therefore transferring the advantage Kentucky currently has to New York,” he said.

McGrath, a retired Marine combat pilot, has raised prolific amounts of campaign cash in her bid to unseat the Kentucky Republican. McConnell referred to himself Monday as a lightning rod for national Democrats, saying: “Every lefty in the country would love to see me lose.”

During policy discussions, McConnell touted his support for numerous trade deals during his Senate career and his willingness to do more, saying it would benefit agriculture.

“Generally speaking, a big, powerful country like us can dominate a lot of areas of trade, and no part of our economy has done it better than agriculture,” McConnell said. “So I’m always looking for another deal for agriculture. And there are deals to be made.”