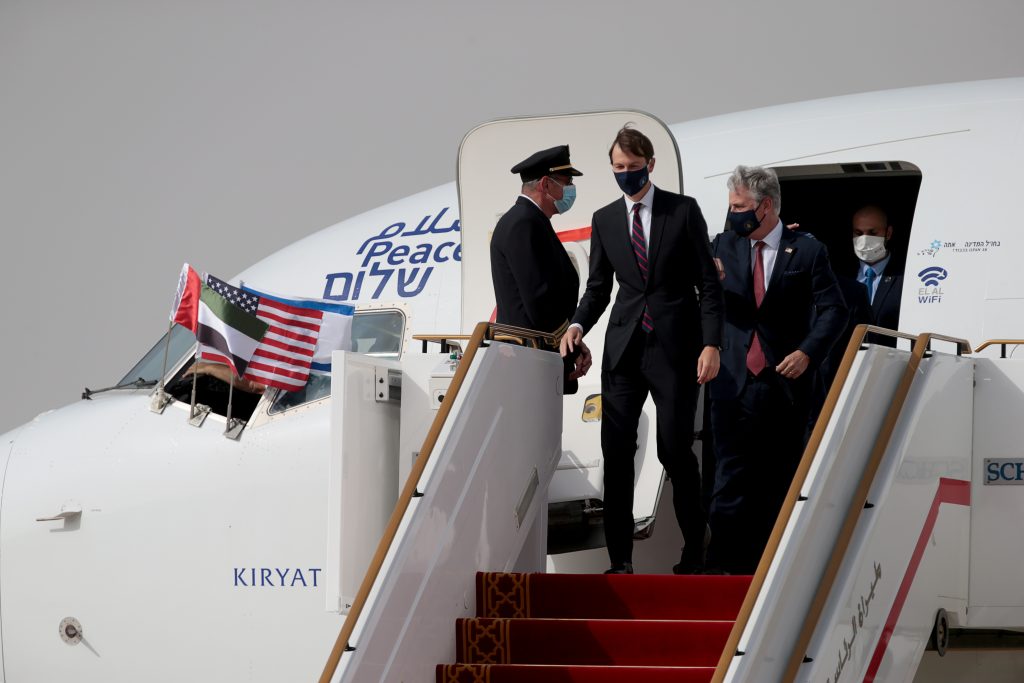 Top aides to President Donald Trump and Prime Minister Binyamin Netanyahu arrived in the United Arab Emirates on a historic flight from Tel Aviv on Monday to finalize a pact marking open relations between the Gulf power and Israel.

“That’s what peace for peace looks like,” Netanyahu tweeted, describing a deal for formal ties with an Arab state that does not entail handover of land that Israel liberated in the Six Day War in 1967.

Announced on Aug. 13, the normalization deal is the first such accommodation between an Arab country and Israel in more than 20 years and was catalyzed largely by shared fears of Iran.

“While this is a historic flight, we hope that this will start an even more historic journey for the Middle East and beyond,” Kushner told reporters before boarding the plane.

Meir Ben-Shabbat, Israel’s national security adviser and head of the Israeli delegation, said he was excited about the trip and that the aim was to lay the groundwork for cooperation in areas like tourism, medicine, technology and trade.

“This morning the traditional greeting of ‘go in peace’ takes on a special significance for us,” he said.

The El Al flight, numbered LY971 as a gesture to the UAE’s international calling code number, flew into Saudi Arabian airspace shortly after takeoff and later passed over the capital, Riyadh. That marked another historic first for Israel and at least an acquiescence by the kingdom for the UAE’s move.

Saudi King Salman, along with other Gulf Arab leaders to varying degrees, maintain their boycotts of Israel in support of Palestinians obtaining an independent state. Any long-term flights between Israel and the UAE would require Saudi clearance to be profitable. Otherwise the three-hour-20- minute flight would take more than seven hours.

El Al spokesman Stanley Morais said the 737-900 is equipped with a missile-defense system, a standard feature on these types of planes and a requirement for this flight. After grounding its fleet due to the coronavirus, it is the airline’s first flight since July 1.

The plane was decorated with the the words for peace in Arabic, Hebrew and English above the pilot’s window. Journalists were handed special face masks decorated with the Israeli and Emirati flags. The seat protectors said “Making History” in all three languages, and Israeli folk music played in the background.

The plane’s captain, Tal Becker, said he has not worked for several months and received a call out of the blue asking him to prepare for the flight.

The 45-year veteran, who is the senior captain in El Al’s 737 fleet, said he never dreamed of flying to Abu Dhabi, calling it a “very special feeling.”

The Israeli delegation will stay in the capital, Abu Dhabi, for one night before returning home on El Al flight LY972, a nod to Israel’s international calling code.

Private jets have earlier flown between the two nations as part of covert talks, and Abu Dhabi’s Etihad Airways flew cargo freighters to Israel before to deliver coronavirus aid to the Palestinians. But the high-profile flight Monday, eagerly promoted by U.S. officials, looks to place a solid stamp on the surprise Aug. 13 White House announcement of Israel and the UAE establishing ties.

Since then, telephone calls were connected, and the UAE’s ruler issued a decree formally ending the country’s decades-long boycott of Israel. Some Israeli firms have already signed deals with Emirati counterparts, but Monday’s visit is expected to usher in a slew of further business cooperation. The official repeal of the boycott looks to open the door to more joint ventures, such as in aviation, banking and finance.

Palestinians were dismayed by the UAE’s move, worried that it would weaken a long-standing pan-Arab position that called for Israeli withdrawal from “occupied territory” – and acceptance of Palestinian statehood – in return for normal relations with Arab countries.

Trump’s senior adviser and son-in-law, Jared Kushner, and national security adviser Robert O’Brien head the U.S. delegation. The Israeli team is led by O’Brien’s counterpart, Meir Ben-Shabbat. Officials will explore bilateral cooperation in areas such as commerce and tourism, and Israeli defense envoys are due to visit the UAE separately.

That could give Trump a foreign policy boost ahead of his reelection bid in November.

The Trump administration has tried to coax other Sunni Arab countries concerned about Iran to engage with Israel. The most powerful of those, Saudi Arabia, while opening its airspace to the El Al flight, has signaled that it is not ready.

In Abu Dhabi several people were injured on Monday in an explosion that was likely caused by gas lines in a restaurant, police said. Abu Dhabi-owned The National daily reported that the blast hit KFC and Hardees restaurants. In a second incident, one person was killed when a gas cylinder exploded in a Dubai restaurant, local media reported.

Hanan Ashrawi, a member of the Palestine Liberation Organisation’s executive committee, said Kushner and his team were “scrambling to convince as many Arab and Muslim leaders as possible” to give Trump an election boost.