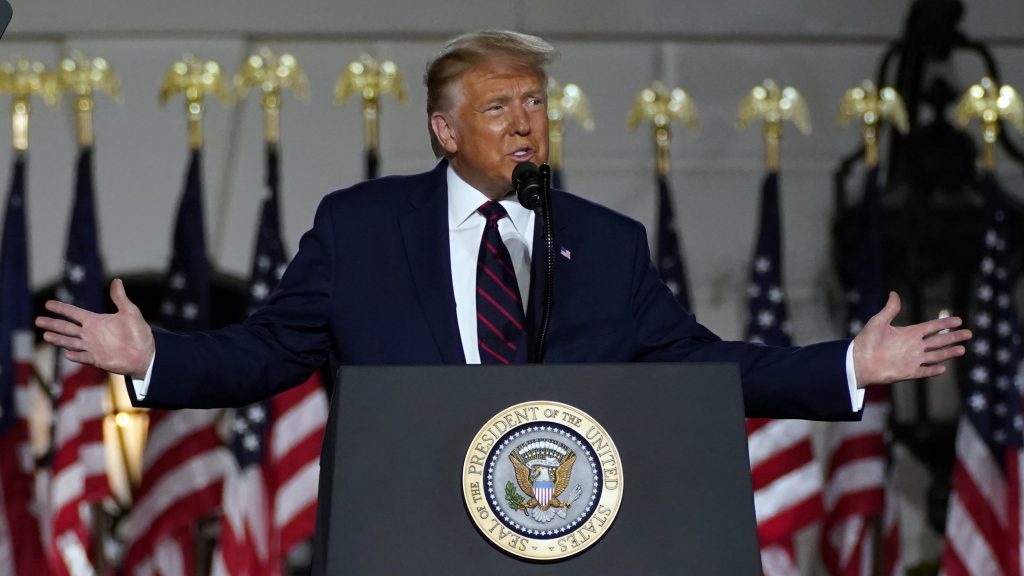 A defiant President Donald Trump accepted the Republican nomination for a second term on Thursday with a scathing attack on rival Joe Biden, asserting that a Democratic victory in November would only exacerbate the racial strife and coronavirus pandemic besieging the nation.

Speaking from the White House South Lawn, Trump portrayed Biden as a far-left extremist who would usher in a lawless, dangerous America.

“This election will decide whether we protect law-abiding Americans, or whether we give free rein to violent anarchic agitators and criminals who threaten our citizens,” Trump said on the fourth and final night of the Republican National Convention in a speech that lasted more than an hour.

“No one will be safe in Biden’s America.”

Trump delivered his remarks before a crowd of more than 1,000 people, standing in front of dozens of American flags and basking in chants of “Four more years!” and “U.S.A.!”

Though an incumbent, Trump remains a self-styled outsider, an approach that won him the White House, his first elected office, in 2016 on a promise to end the crime and violence he said was afflicting the country.

Republicans on Thursday sought to turn the chaos to their advantage by claiming Biden would “defund the police.”

“If given the chance, he will be the destroyer of American greatness,” Trump warned.

The made-for-television scene stood in marked contrast to Biden’s acceptance speech last week, which was broadcast live from a largely empty arena in a nod to the disease.

Following the speech, fireworks exploded over the Washington Monument as the president and his family looked on, giving Trump and the convention a powerful closing image.

Trump’s campaign also comes against the backdrop of a fresh wave of protests over the latest high-profile police shooting of a Black American. In Kenosha, relative calm returned after three nights of civil strife ending on Tuesday, including arson, vandalism and deadly shootings.

In his speech on Thursday, Trump promised in his second term to levy tariffs on any company that left America to create jobs overseas, one of the concrete policy proposals of the night.

He also promised to rebuild what Republicans have called the “greatest economy” in history and attacked Biden for saying he would shut down the country if necessary to slow the spread of the disease.

“Joe Biden’s plan is not a solution to the virus, but rather a surrender,” Trump said.

Thursday’s program aimed to counterbalance defection by some Republicans who worked in previous administrations, featuring a video showcasing former Democratic voters who say they now support Trump and remarks from U.S. Representative Jeff Van Drew, who abandoned the Democratic Party to join the Republicans after voting against Trump’s impeachment this year.

The program featured several emotional appeals, including from the parents of Kayla Mueller, an aid worker who died after being held captive for months by Islamic State militants in Syria. The Mueller parents said they blamed the Obama administration for failing to rescue Mueller.

With both parties’ conventions now complete, the campaign will enter its final, frenetic stretch. Biden, who has largely eschewed in-person events since March because of the pandemic, said at a Thursday fundraiser he expects to travel to several battleground states after early September, albeit in a manner he described as responsible.

Trump, who has visited several battleground states during the pandemic, also plans to increase his campaign travel.