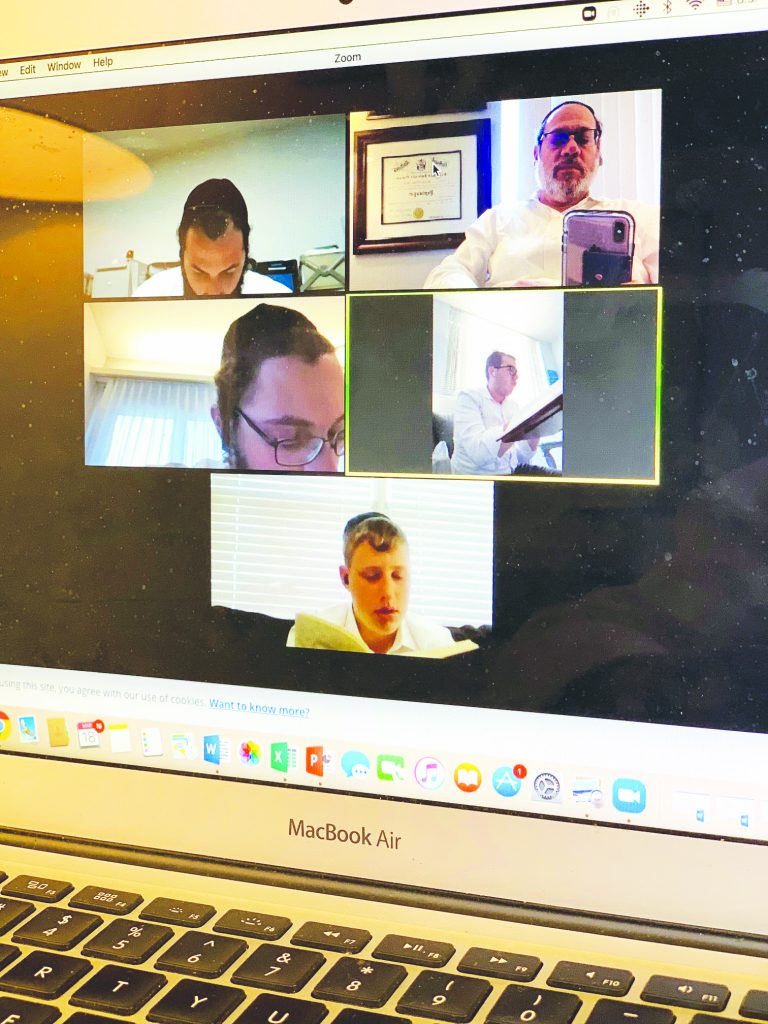 Throughout the COVID-19 pandemic there have been individuals who have taken a stand to look beyond the terribly tragic stories and experiences and inspire others through their example as role models. The quarantining of the pandemic has been challenging to everyone; however, some have turned the lockdown into an amazingly positive opportunity. Over the past five months, 15 people in Yeshivas Eitz Chaim from Miami have used COVID-19 as a springboard into taking tests on behalf of the semichah program on Yoreh De’ah.

For the last year, the talmidim of Yeshivas Eitz Chaim have been studying hilchos basar b’chalav in the Shulchan Aruch. Their Rebbi, Harav Moshe Salfer, received semichah as a young bachur from Yeshivas Bais Moshe Chaim under Harav Yochonon Zweig, shlita. While in kollel, Harav Salfer recognized that the talmidim in Yeshivas Doresh, under the direction of his father, Harav Mordechai Salfer, would greatly benefit from limudim toward semichah, which would be quantifiable and accomplishing.

The derech halimud is to learn the sugyos in Gemara, followed by halachah l’maaseh. Harav Salfer delivers a very clear shiur each day. There is an organized plan and clear source sheets so the bachurim can prepare for shiur well ahead of time. In addition, the talmidim talk in learning with people who can answer their questions on the sugyos and the application of the halachah.

Rav Moshe required each talmid to pledge in the beginning of the year that he was committing to the plan and the goal. Some of the talmidim had their doubts, but Rav Moshe kept reassuring them, “We won’t leave anyone behind.”

From the beginning, Rav Moshe or one of the other meishivim, Harav Daniel Behar and Harav Isaac Sofer, gave extra time and attention to anyone who needed it. For seven months, they pressed forward in learning hilchos basar b’chalav in the yeshivah, until COVID-19 struck.

They had been getting closer to finishing. It began to look like they could actually succeed at what they had set out to do for that year. However COVID-19 became a colossal challenge. Everyone was immediately sent home after Purim, and it seemed like the chaburah was disbanded. Each bachur had gone his own separate way: back home to Switzerland, Australia, Lakewood, New York, Detroit, etc.

A meeting was convened and a plan of how to continue going forward using Zoom was arranged. The daily shiur would immediately resume. The timing of the shiur would have to be fine-tuned to the various time zones in which the bachurim lived; however, Rav Moshe even agreed to giving the shiur a few times each day to accommodate everyone’s schedule. The question sheets were sent each day to everyone. Each shiur was recorded and available for review.

Earlier, over the year, the word had begun getting out that a super-clear shiur was available on hilchos basar b’chalav, and the yeshivah began receiving requests even from people living in Eretz Yisrael who were interested in participating by phone conference. However, after COVID-19 began, the interest grew further. There were people who were stuck at home and were interested in joining this limud.

Since there wasn’t much else for each bachur to do, the decision was made that the chaburah would continue through what would have normally been bein hazmanim. There was an onward drive to complete the year’s goal. The chaburah finished basar b’chalav and began a chazarah on everything. The chavrusos learned each day for a few hours, listened to the daily shiur, did their own personal chazarah, and received support from dedicated Rebbeim.

This continued until the individual oral farhers during the Nine Days. What was amazing was the bond that was being developed between the bachurim even while they were separated by thousands of miles. In addition, the parents saw how their sons became absorbed in their learning.

The farhers were given individually on Zoom by Harav Yehuda Zweig, shlita, and Harav Yaakov Wincelberg, shlita. The bochanim were plainly amazed that these bachurim had such clarity in the sugyos and halachah, especially having been taught over Zoom. It was unbelievable that they had continued to keep growing to such a level.

So far, 10 bachurim have taken the oral farher on hilchos basar b’chalav, and there are a few more waiting for their own moment to shine.

This Rosh Chodesh Elul, Yeshivas Eitz Chaim starts back up again in Miami with bachurim from around the globe to begin the second half of their trek towards semichah. Harav Salfer will, b’ezras Hashem, resume a Zoom shiur on hilchos taaruvos, as well as one on hilchos Shabbos. As in the past, there will be source sheets, question sheets, chavrusos and recorded shiurim. Interested parties should contact 305-992-8497 or moshesalfer@gmail.com.