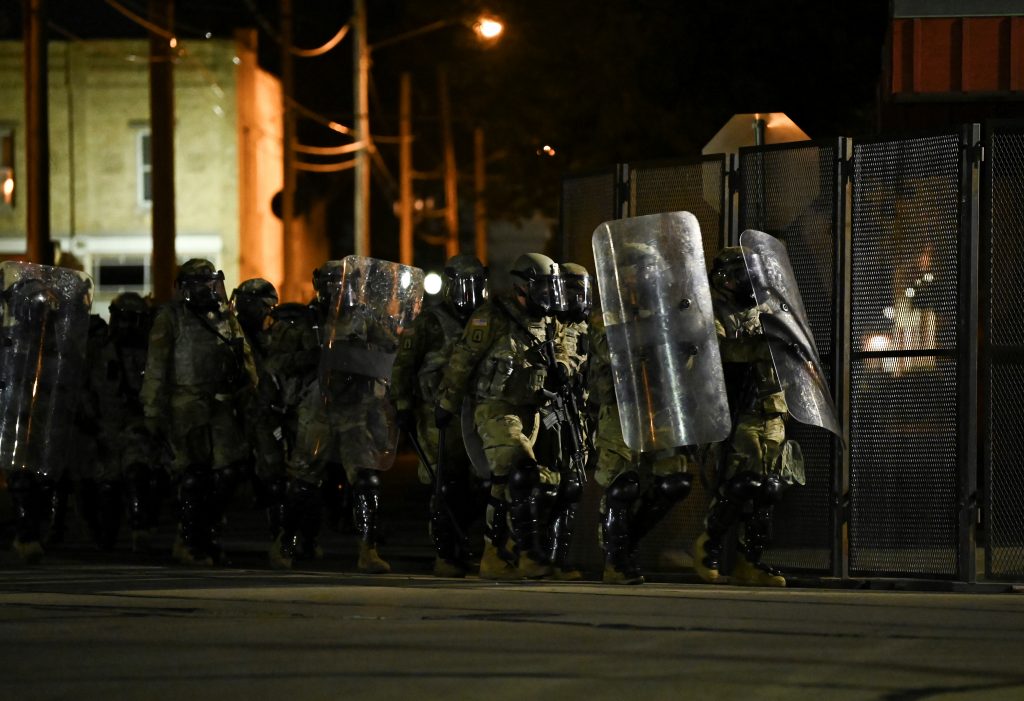 A third night of street protests over the police shooting of a Black man erupted into gun violence late Tuesday and early Wednesday in Kenosha, Wisconsin, killing two poeple, and wounding one, the county sheriff said.

Social media videos showed people screaming amid close-up images of gunshot wounds after a night of skirmishes, with police firing tear gas and rubber bullets, had appeared to ease.

Crowds chased a man running down the street with a rifle after they believed he had shot another man. One pursuer took a flying kick at him after he fell to the ground, and another tried to grab his weapon. He appeared to be shot at close range and fell to the ground.

Two others were wounded and received aid from bystanders, the videos showed.

Kenosha has been rocked by protests since Sunday, when police shot Jacob Blake in the back at close range as he walked away from two officers and opened his car door, according to a bystander video that went viral. Three of his young sons were in the car, witnesses said.

Blake, 29, was hit by four of the seven shots fired and left paralyzed and “fighting for his life,” his family and lawyers said on Tuesday, hours before the latest round of civil unrest broke out in the lakefront town between Milwaukee and Chicago.

Anti-racism protesters also clashed with police in Portland, Oregon, and Louisville, Kentucky, on Tuesday night, part of a wave of national protests that have continued since the May 25 death of a Black man in Minneapolis, George Floyd, who was pinned to the street under the knee of a white police officer.

Police arrested more than 60 people in a protest march in Louisville, Kentucky, organized for Breonna Taylor, a Black woman killed in March by police officers who burst into her apartment.

The Kenosha protests have drawn self-styled militias, patrolling the streets with rifles. Usually white men, they have weapons slung over their shoulders or at the ready while standing guard outside businesses to protect them from looters or arsonists.’

Kenosha County Sheriff David Beth told the New York Times and the Milwaukee Journal Sentinel that one person was shot dead and two were wounded.

“They’re like a vigilante group,” Beth told the Journal Sentinel, though he said he was unsure if the man at the center of the outburst was linked to such a group.

Beth predicted the main suspect would be caught, telling the newspaper, “I feel very confident we’ll have him in a very short time.”

Videos showed the suspect running with his rifle and others giving chase, believing he had already shot someone. The gunman warded off his pursuers by firing at them at close range and the crowd dispersed. Other shots were heard in the background.

“Stay down, stay down!” someone yelled.

Another social media video shows a man with a severe arm wound sitting on the ground tended to by a man with a long gun as police approach.

Yet another video shows a man lying between parked cars with an apparent gunshot wound to the head. Several people rushed to his aid. One bystander took off his shirt to stop the bleeding, but had trouble finding the wound until other people came to help.

“You shot him?” someone asked.

“I didn’t,” came the response.

Others implored the wounded man to keep his eyes open and told him he would be okay.

“You’ve got to keep him alive,” someone said.

Before the gunfire, police in riot gear fired rubber bullets, tear gas and flash-bang rounds to push back demonstrators who defied a dusk-to-dawn curfew and gathered outside a courthouse and adjacent park.