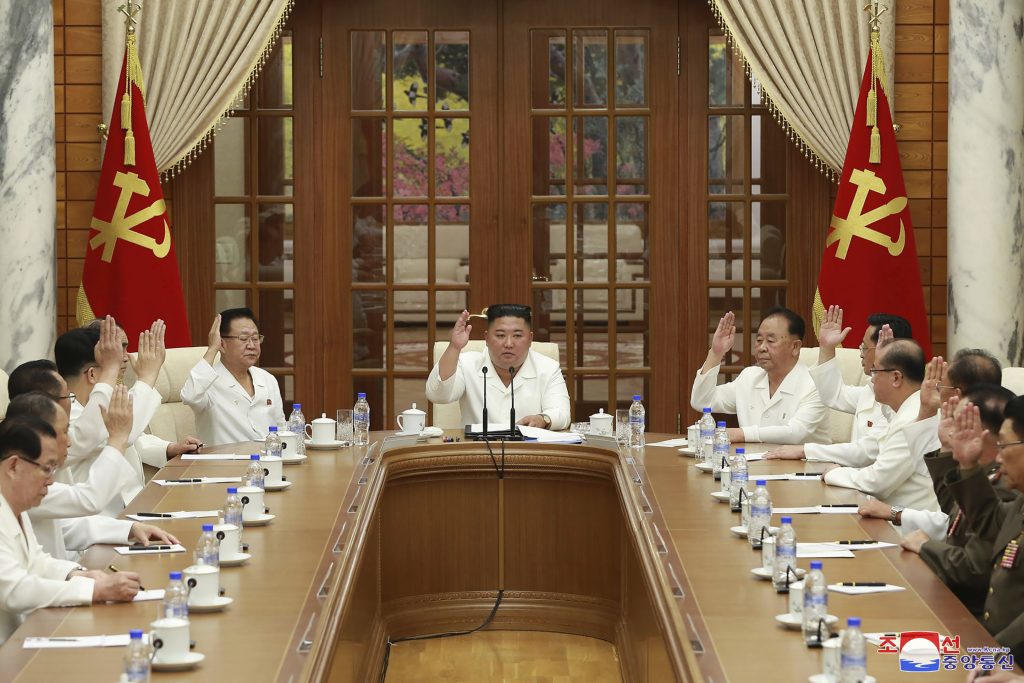 In a rare display of urgency, North Korean leader Kim Jong Un held his third high-level political conference in as many weeks, where he raised alarm about the nation’s coronavirus response and a typhoon forecast to hit the country early Thursday.

During an enlarged meeting of the Politburo of the ruling Workers’ Party on Tuesday, Kim lamented unspecified “defects” and “shortcomings” in the country’s anti-virus campaign and urged that they be corrected swiftly, the North’s official Korean Central News Agency said Wednesday.

Kim also called for thorough preparations to minimize damage from Typhoon Bavi, which comes weeks after torrential rains caused flooding and massive damage to homes and crops, inflicting further pain to an economy ravaged by U.S.-led sanctions over its nuclear weapons and border closures amid the pandemic.

Kim set tasks for the party and public services at every level, “saying that to thoroughly prevent the casualties by the typhoon and minimize the damage to crops is important work which can never be neglected, even for a moment,” KCNA paraphrased the leader as saying.

Typhoon Bavi as of Wednesday morning was near the South Korean island of Jeju and was on course to hit the northwest coast of the Korean Peninsula around daybreak Thursday morning. South Korea’s weather agency said it had a maximum wind speed of 162 kilometers per hour (100 mph) and was forecast as one of the strongest to hit the peninsula this year.

Pyongang’s official Rodong Sinmun newspaper in an editorial urged the nation to demonstrate “single-minded unity” in a struggle to protect “people and the assets of socialism from natural disasters.”

“They should turn out as one in the struggle for preventing typhoon damage, sharing the consciousness of crisis with the Party,” the newspaper said. “They should direct the biggest efforts into ensuring no loss of life.”

KCNA said earlier the typhoon warning covers most the country, with fishing boats called to shore and measures being taken to protect buildings, farms, railroads, coal mines and power stations.

In another ruling party meeting last week, Kim admitted the country’s economy has not improved as he had hoped. The Workers’ Party cited “internal and external situations” as hurting the country’s economic development, likely referring to U.S.-led sanctions over North Korea’s nuclear program, the recent flooding and the efforts of closing the country’s borders and other steps taken during the COVID-19 pandemic.

During the meeting last week, the ruling party scheduled a rare Congress in January to set development goals for the next five years.

Experts say the coronavirus derailed some of Kim’s major economic goals after North Korea imposed a lockdown that significantly reduced trade with China — its major ally and economic lifeline — and likely hampered its ability to mobilize its workforce.

The North has yet to confirm a single case of COVID-19, but outsiders have widely doubted its virus-free claim. In late July, Kim ordered a lockdown of Kaesong, a city near the border with South Korea, after the North reported it found a person with COVID-19 symptoms. It later told the World Health Organization the person’s test results were inconclusive.